Let the dice flow through you

Star Wars: Dark Uprising is another game in The OP’s ‘Rising’ series, with this instalment giving players the opportunity to battle the Empire and try and prevent the Death Star from being completed. With familiar faces from A New Hope, Rogue One and Rebels, players must build their team, slow down the completion of the six key Death Star components, and defeat Imperial forces across three planets, all under the watch of a menacing bust of Darth Vader.

The gameplay is simple, with the rulebook quickly being placed to one side after a few turns. Despite the apparent ease of the game, it does still prove to be a challenge as players need to ensure that they are working cooperatively to balance the different objectives, with one victory condition and three conditions that lead to defeat. It is incredibly easy to get hooked on one objective and you may find yourself having already lost. The dice system makes this a game that can be both kind and cruel. An unlucky roll at the wrong time can stop your rebellion in its tracks.

Turns begin by choosing a location to visit with your team, a simple choice that holds a lot of bearing as each turn there is a one in three chance that Darth Vader will visit the sector a player is visiting. Roll randomly to see which of the six Death Star components nears completion or if one is already activated then it triggers a unique ability, which adds an additional dynamic as this can really hinder you as more components come online. Next comes the part of the turn that can, towards the later stages of the game, becomes the tensest roll of the turn, seeing which direction Darth Vader will rotate. This certainly leads to a few of these rolls being made with closed eyes. Once that potentially traumatic roll is done with it comes time to fight back! Roll a dice to recruit new Rebels or attack Imperial assets by matching all symbols on the card. This is a simple system, but the four different coloured dice each having a higher chance of rolling one of the four symbols (as well as a double result) does provide a tactical element as players can choose their targets to recruit or attacked based on the dice available to them, as well as making it crucial to acquire more dice through recruiting key rebels. 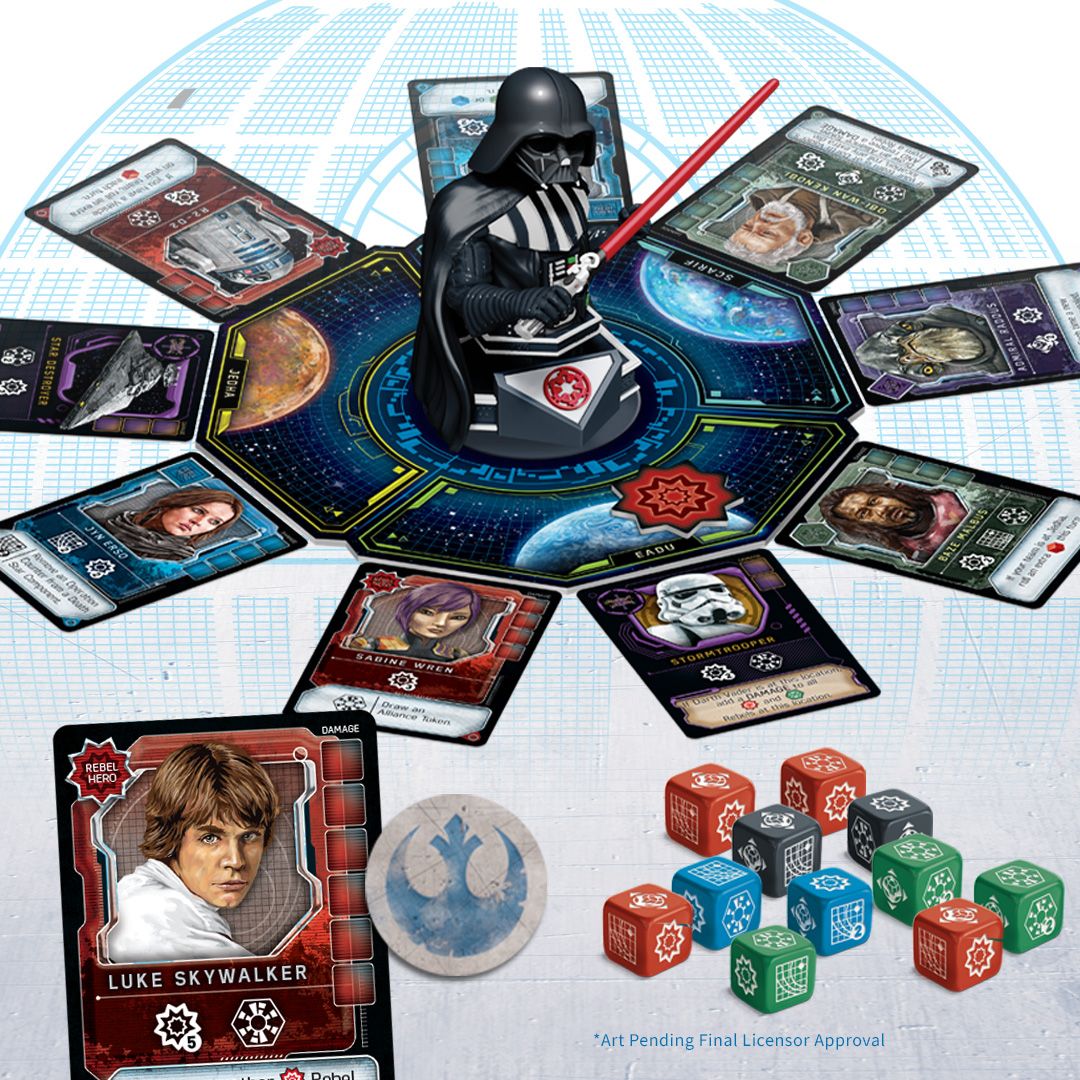 Whilst it doesn’t delve deeply into the Star Wars universe or offer players a more in-depth experience of galactic rebellion it really is entertaining to play a few rounds of in an evening. With three different types of dice used across the turn it is a game that is heavily based on chance, which may not be for everyone, but is part of what makes it enjoyable as each roll becomes a make or break moment, with the promise of glory on the other side. Particularly if, like me, your first few attempts end in crushing defeat.

You won’t find anything really nitty gritty, but you will find yourself playing this until you prevent the Empire from unleashing the power of this fully armed and operational battle station. (Wait, wrong film…)

Play this if you liked...Escape: The Curse of the Temple

If you’re a fan of classic cooperative dice game, Escape: The Curse of the Temple, then Dark Side Rising should get your midi-chlorians going.