It’s a small war after all

Small World is something of a modern classic. In the world of Euro-ish area control games, this is the thinkier, more mechanical version of Risk. Small World of Warcraft is, sadly, not just a micro-sized version of the game a la Ticket to Ride London, if anything it is a game that’s increased in scope. Instead we’re in Azeroth, the home of the variously generic fantasy people of World of Warcraft – the digital game that became the successor to EverQuest as the definition of what an MMORPG is.

Here it’s a chance for Days of Wonder to reskin this fight for supremacy and upgrade some of the components. Whereas the original Small World had a variety of oblong and square boards to represent the world you’re taking over, here we’ve got a world broken up into lumpy modular island. Players grab a couple based on their player count and place them wherever on the table – offering a looser board space that feels a little more organic. It looks great, especially as you’ll be planting boxes of races, tokens and coins around the board anyway. Additionally, instead of the fantasy races from Small World we have those from Blizzard’s universe. You might ask about whether it’s worth swapping a Dwarf for a Dwarf, but the addition of races like the Forsaken – with their huge supply of tokens – is a nice thematic link that feels like a worthwhile change in the way the game is played. 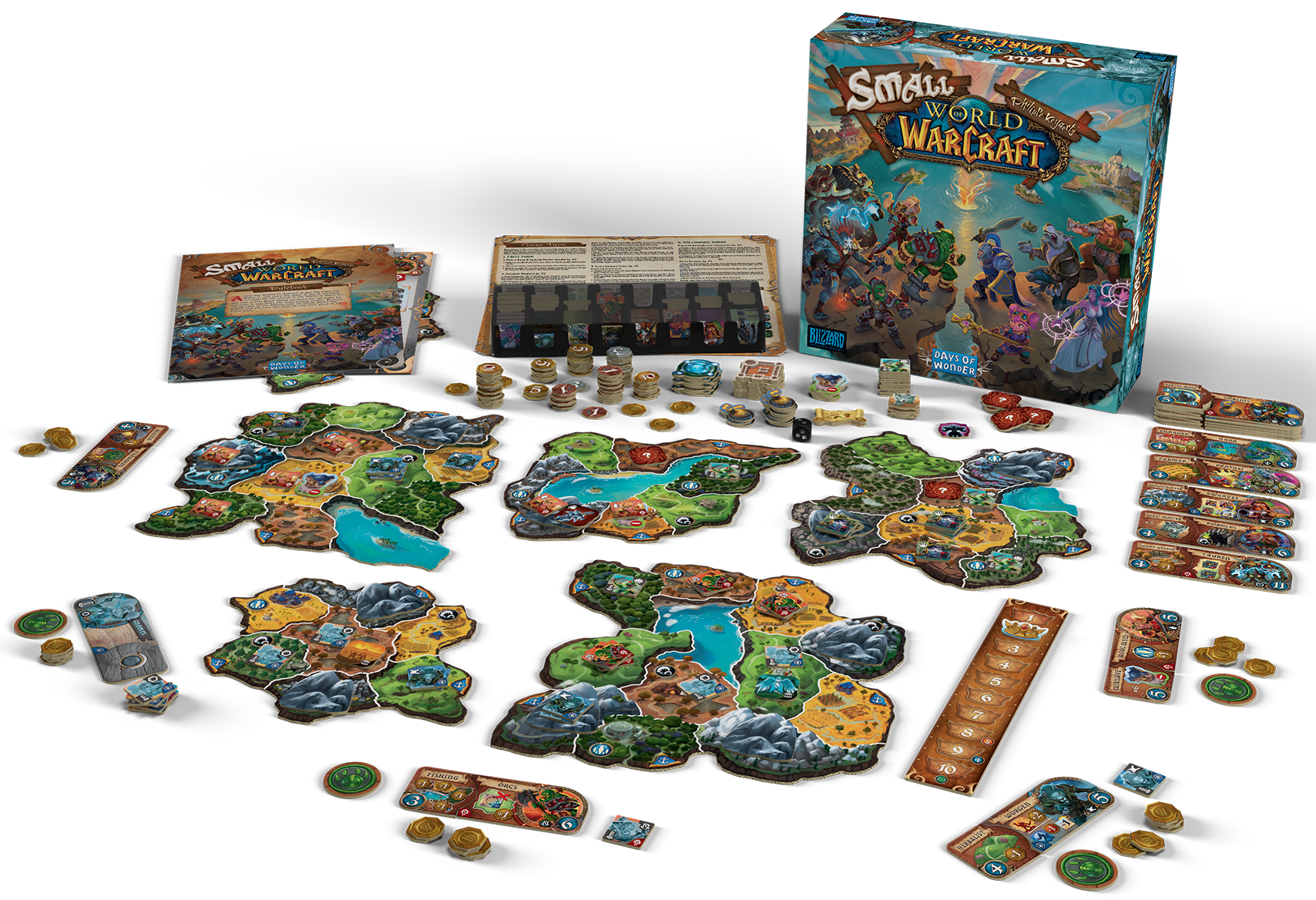 The game loop is unchanged. You draft a race from the market – randomly built from the race banner plus a special power – take their tokens (the sum of the banner and power) and then begin spreading out across the world like an Elf/Tauren/Kobold tide. Conquering an area means placing a majority in it, with modifiers for mountains, Murlocs and indeed, your enemies. Any defeated enemies are returned with a number discarded back to the box. Then the other players do the same. When you’re at a point where your current race is overextended, you’ll put them in ‘decline’ and select a new one to then repeat the process with. There’s a little bit of luck, as you can use the dice to add points to your final tile, but for the most part it’s about not extending too much and choosing when to flip on your current race. It’s a good back and forth at two players and enjoyably conflictful at higher player counts.

The only real complaint is that if you’re not immediately familiar with the World of Warcraft cast, you can sometimes find the picking the right tokens out is a bit of consultation and peering at the difference between trolls, orcs and goblins. Anything that is as mass market as World of Warcraft is always going to have its aesthetic edges sanded off and that sometimes hurts it on the smaller tokens.

In addition to the normal rules, there’s a bonus set of team rules. This leans on the Horde, Alliance, and neutral flavours of cards, and changes the drafting mechanic to a kind of grid. It’s a smart addition that reinjects some of the World of Warcraft flavour back into the game.

Small World of Warcraft is a perfectly good place to be starting out for fans of the MMO, whose reference points will imbue it with meaning. If that’s you, then it’s time to choose your allegiance.

If taking over the world is what you’re into, then this is a good a place to get involved on the more ‘euro’ end of the spectrum.