Build an empire in a flash with this elegant strategy game

Despite its suggestive title, A New Dawn bears little in common with the two previous board game adaptations of Sid Meier’s popular strategy series. Nor does it share much DNA with the classic Avalon Hill Civilization that originally inspired the PC game franchise.

The main surprise for fans of epic empire-building favourites such as Through the Ages, Clash of Cultures or Civilization will be that A New Dawn isn’t a multi-hour marathon of complex technology trees (a system that the original Civ pioneered), micro-management and gradual cultural evolution from the beginning of humanity to the modern age and beyond. A New Dawn can be learnt, played and packed away in well under two hours – a feat rarely heard of in this genre.

Despite its relatively short length, the game ticks almost all of the boxes you’d expect from a quality civ-builder. There’s the expansion of territory, advancement of tech, forging (and breaking) of diplomatic bonds and option for direct conflict when the need arises. It’s just all been elegantly condensed and streamlined into a game that – while perhaps not as deep as the heavyweights – manages to occupy a very comfortable space as a still meaty filler.

What makes the game particularly pacey is the decision to make each turn consist of a single action, rather than covering every element of running an empire at once. One turn you might choose to attack nearby barbarians (which randomly move and respawn between the players' turns) or conquer a city-state; the next you might instead focus on expanding your territory by placing more control tokens or advancing your caravans across the map to establish diplomacy and trade with your neighbours. This not only helps those less familiar with the multifaceted strategy of empire-builders understand what’s going on, but also keeps everyone engaged as control quickly bounces between players.

The vast majority of actions are dictated by five cards in a focus bar representing the broad strategic pillars, which are reset to the back of the queue after they’re used. Waiting to use a card makes it more powerful (greater combat strength, more tech points, the ability to expand into tougher terrain and so on), making the main tension of the game more akin to a tight hand management card game than a traditional strategy board game.

The five cards can be upgraded by gathering enough tech points, but there’s no fixed linear progression – a starting card can be replaced with the most advanced version without needing to go through the two stages between. This keeps up the momentum and avoids funneling players down a particular play style, but it does detract from the typical satisfaction of watching your empire progressively advance through the eras, leaving things feeling a little more thematically disjointed. The victory conditions are similarly less clear-cut, requiring three random achievements spread across the 4X spectrum rather than presenting the chance to win with a singular focus.

On the whole, A New Dawn looks great, with a fantastic modular map and plastic miniatures for cities and caravans, supplemented by basic but easily-read counters that slightly abstract a kind of combined worker-warrior presence. Although one of the game’s strengths is its relative simplicity and most of the rules are communicated by the cards, some of the specific details (what you get for defeating a barbarian, what’s gained from trading with a city-state) will require referring back to the rulebook – at least until you’ve memorised them, which admittedly doesn’t take long. Each starting faction has a different unique skill and starting order, giving just enough of a sense of distinctness between them.

A New Dawn packs so much of the satisfaction of a far heavier and longer game into its comparatively modest offering. It’s not a replacement for the grand epics of the genre, but it’s a brilliant option for those looking for an experience that still feels meaningful and engaging but could be played in a lunchtime.

While it doesn’t have quite the same sense of grandeur as the classics in the genre, A New Dawn is a streamlined and satisfying empire-builder that manages to do a lot with a little. It’s a perfect gateway option for strategy newcomers and a pleasing filler for diehard fans. 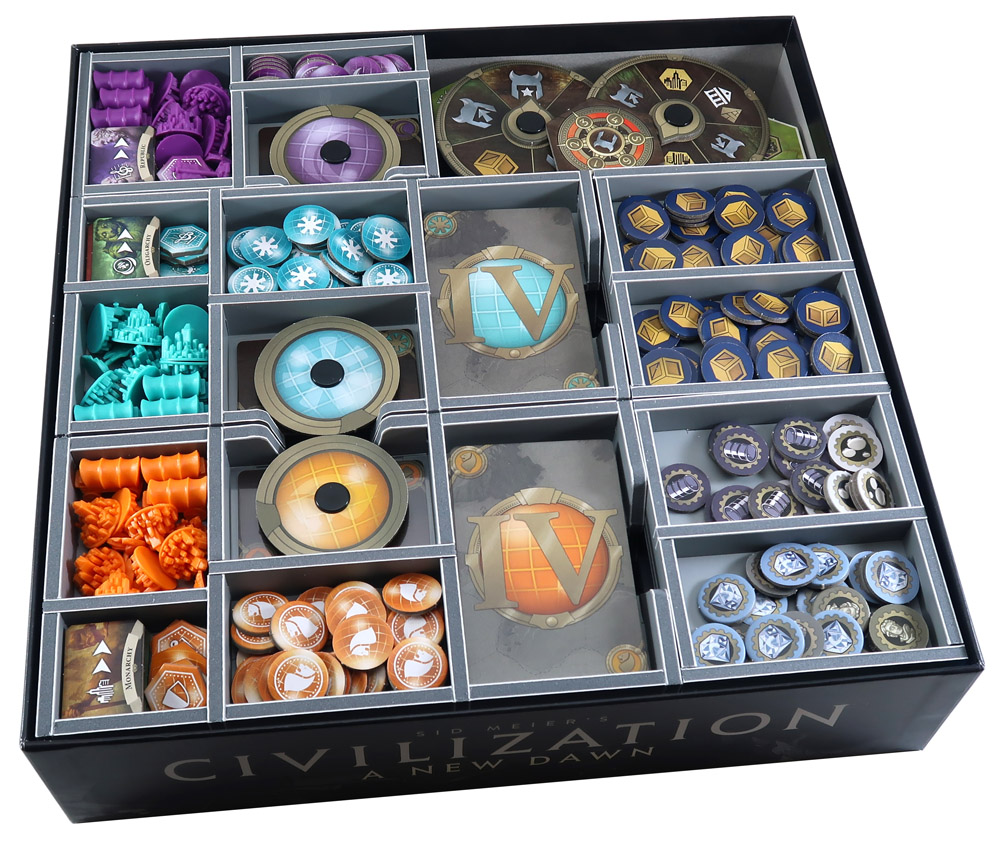 Compatible with Civilization: A New Dawn®, including the Terra Incognita® expansion.