Introducing newcomers to our hallowed halls of tabletop gaming can sometimes be a tricky experience. You know the feeling, a few non-gaming friends have gathered round at yours and instead of watching Great British Bake Off you pause the show and cautiously suggest playing a game. There are some gasps of horror, your friend Louise faints and Dennis drops a dish in the kitchen… the ringing of the pieces as they hit the floor is the only sound as you slowly reach for the remote and press play again.

The problem is that the word ‘game’ for some conjures up images of long Christmas afternoons playing Monopoly with granny, who keeps asking the rules, while Uncle Roy takes over the bank and helps himself, not only to the £20 notes, but the drinks cabinet too. More often than not, the game ends up in an argument about who gets the free car parking money and no one speaks to each other until the following Christmas when it’s decided to watch the Only Fools and Horses special instead.

Of course, there are so many really great tabletop games that don’t play like the potentially boring slog that is Monopoly that this image of gaming is totally unfounded. However, it’s getting newcomers to make that leap from games they may have known from their childhood to tabletop games that are available now. The term that’s often used is ‘gateway’ games, so instead of suddenly presenting new players with the Game of Thrones boardgame complete with its myriad of rules or Zombicide with its numerous pieces and zombie killing gameplay, it’s better to offer up something easier and often more sociable.

So, step up to the plate Sheriff of Nottingham, a game that is as simple as the ability to pull a straight face while lying through your teeth. Sheriff of Nottingham takes the art of bluffing and does something rather special with it. A typical came will see you pleading, bribing, begging, stabbing your friends in the back, pressuring people to confess and generally being a thoroughly terrible person… it’s like House of Cards the Game. Of course, you can play like a saint and never tell a lie but where’s the fun in that? 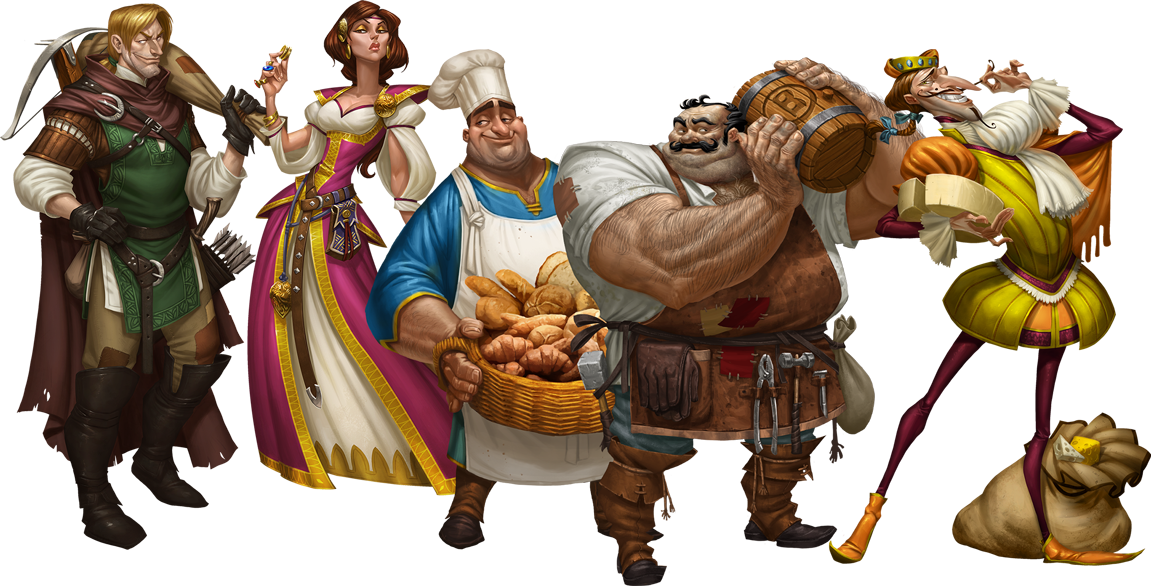 The premise is this: between three and five players take on the role of a merchant in the fair city of Nottingham around the end of the 12th century and the beginning of the 13th… suitable period outfits are optional. Although you commonly tend to sell products like bread, cheese or chickens you’re never going to be able to retire on the proceeds – so where’s the harm in smuggling in some contraband like silk or crossbows to add some extra coin to your purse? Unfortunately the wicked Sheriff of Nottingham stands in the way of your illicit endeavors and may choose to inspect any goods you’re bringing to market. If you’ve got nothing to worry about, great, the Sheriff will hand over some cash for troubling you but if you’re a secret silk smuggler it’s time to pay up!

In the game it plays out like this: each person takes it in turn to be the Sheriff while everyone else is a merchant. The merchants draw six cards, featuring legal goods like bread or apples or illicit items like pepper or mead. Each card is worth a certain amount of money, e.g. bread is three while apples are two, but the contraband is worth far more… so there’s an incentive to try and smuggle these past the Sheriff. From the six cards in their hand, a player chooses whether to discard any and then places up to five cards in a little material purse (complete with popper that makes a very satisfying ‘pop’ noise when opened and closed). The purse is handed to the pompous Sheriff who can choose whether or not to inspect the contents… and this is where things start to get really fun, particularly when you get a little creative.

“I’ve definitely, absolutely only got three apples in there,” explains the merchant, a fixed look of calm across his face.

“I see,” says the Sheriff, “so you won’t mind if I take a look. You know how it is with Robin Hood and the like getting in here and mucking things up. We have to be careful.”

The calm on the merchant’s face cracks a little. “Ah… well… yes… I said three apples, right? Well, of course. Yes. Nothing dodgy in there. I mean, I’ve never even met Robin… Wood, did you say?”

“Hmm,” answers the Sheriff with a glare, “I’m not sure I like the cut of your jib.” He begins to tease open the purse.

“Wait!” cries the merchant. “You’re a busy Sheriff and I wouldn’t want you to go to the trouble of opening that purse, you’ve got other people to harass… I mean speak to you. Perhaps we can come to a little agreement… say 10 coins to let me pass?”

“15 and I’ll turn a blind eye,” replies the Sheriff in a heatbeat.

“Fine!” shouts the Sheriff and pops open the purse and produces… three apples. The Sheriff’s face goes white with fury, while a smirk creeps across the merchant’s face.

“I believe you owe six coins for troubling me, sir?” Giggles the merchant, as the Sheriff angrily thrusts the money in his hand and sends him away.

“Next!” he bellows, determined to make the next idiot pay.

That sums up just one of the many potential exchanges between players taking on the different roles. Sheriff of Nottingham really is a game about bluffing, counter bluffing and then bluffing some more just in case. The way it works is that if the Sheriff doesn’t believe what items the player has declared but upon opening the purse finds out they were telling the truth, he must pay a fine. Conversely if he discovers the merchant is trying to smuggle through contraband, the merchant must hand over a fine instead. 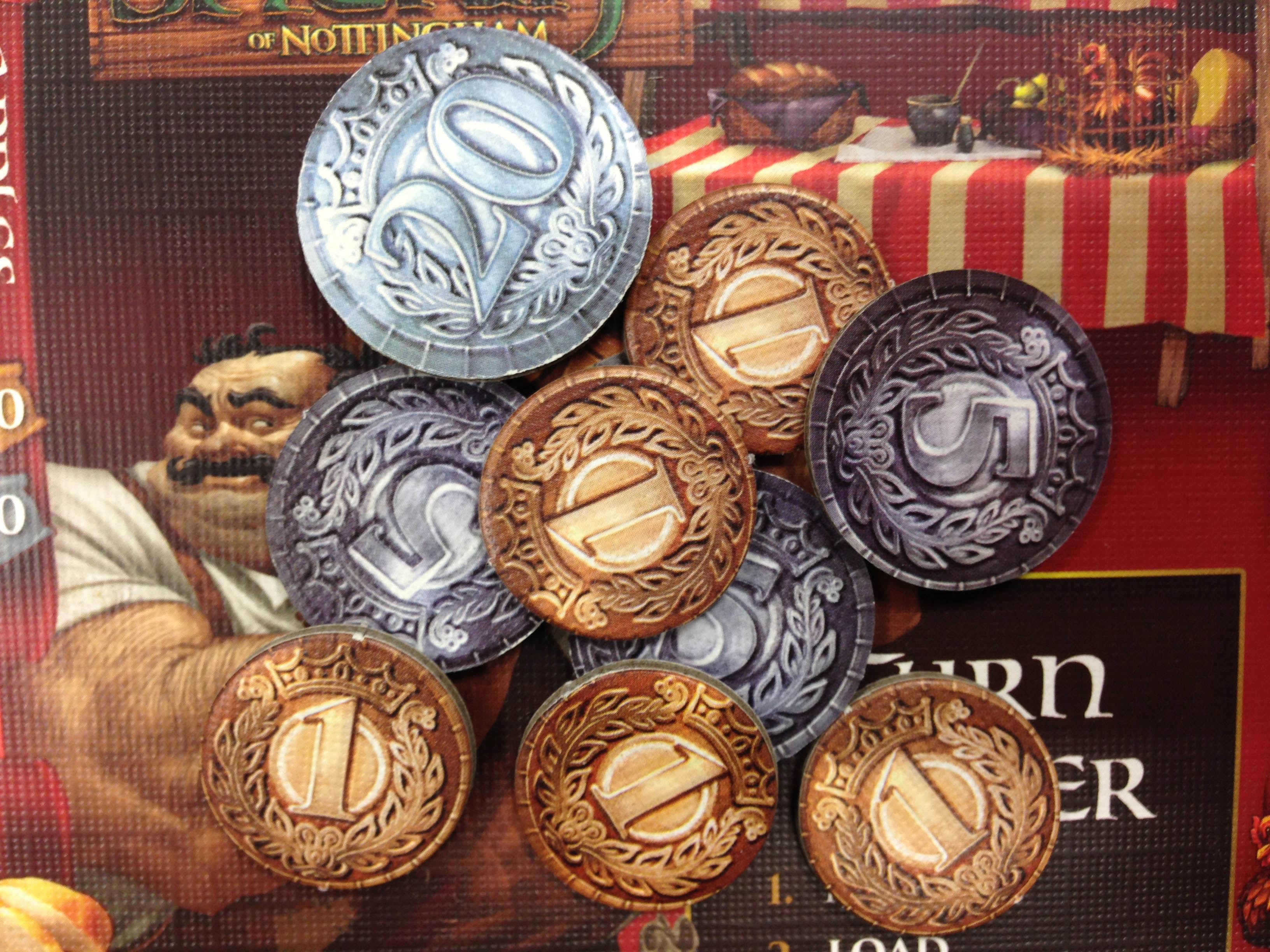 However, to try and counter the Sheriff’s questioning gaze, the player can offer to grease his palm and turn a blind eye. But the way he can bribe the Sheriff is another super element of the game. Instead of just saying ‘here’s five coins to give me back the purse, he can say ‘here’s 20 coins to ignore my purse but perhaps you want to have a gander at the player next to me because I’m sure I saw a crossbow in there’. If the Sheriff agrees he must inspect the next player’s bag because of the deal. All deals that can be completed in the same round must be honoured, although any deals that rely on a following round can be reneged. It makes for some wonderful negotiations and betrayals.

Sheriff of Nottingham is certainly a game that brings out the best… and worst in people. If you really engage in the part of the merchant or Sheriff then you’ll have an absolute blast. In particular it’s interesting to see how different players take to the role of Sheriff. In our playgroup one was very kind, believing most of the merchants and only accepted the slightest bribe, to ensure that she didn’t have to hand over any fines. However, the following player was the proverbial Bad Sheriff to her Good Sheriff, refusing to believe anyone and opening every purse, only to discover that everyone was telling the truth. It was one of those circumstances when everyone knew how that player would approach the game, so kept things straight for that turn.

Of course, you’ve got to really get involved with Sheriff of Nottingham and the amount of fun you’ll have will depend on the crowd because, after all, it’s a fairly simple premise for a game. But if you immerse yourself in the role and get involved with the dirty dealings or multi-level bluffing then this is a title that will have you coming back again and again.

Unfortunately, one of the elements where Sheriff of Nottingham falls down is at the end of the game. Throughout the rounds it’s likely you’ll have had an absolute blast, laughing, shouting and potentially swearing but once the dust has settled you’re left adding up all your goods up using a slightly complicated mathematical system. Now look, we’re not one to complain about a little adding up, but in Sheriff of Nottingham it seems to go against the raucous fun everyone else has been having. Instead it’s heads down and pens out to work out the scores. Things are made more complicated by the fact there are bonuses for the players who have delivered the most and second most amounts of particular goods – so there’ll be a gold and silver award for apples, cheese, bread and chickens. Obviously it’s not impossible to add up all the scores but it’s just a downer compared to everything before it. We tend to house rule the scoring to forget about the awards for delivering certain goods and only go on the gold and amount the goods are worth.

It’s the picky scoring system that stops Sheriff of Nottingham being an amazing game but it’s still a great game, particularly as an introduction to tabletop gaming. It’s one of those titles that really rewards those people that throw themselves into it and really play the roles. You’ll quickly learn to dread or delight in that magical ‘pop’ of the purse being opened because it either means you’ve been caught out or you’ve just made a huge mistake. Either way, you’ll still be having lots of fun.