An offputting choice of visual style lets this game down

If nothing else, Shardhunters provides a great test case of how a game that plays pleasingly can be let down by its choice of theme. As a quick-play battler, it works well, with some neat twists introduced by its wide selection of hero cards, each with its own rule-tweaking power. Each player starts with a hero, hoping to earn Bloodshards from winning monster hunts and spend them to recruit further heroes to their party. If you win a hunt with five heroes in your roster, you win the game. But only two heroes can be active at a time, encouraging you to think hard about which powers you activate per hunt.

The hunts involve playing down monster cards from a hand of seven, across four combats. Each has a value between one and four, with four categories of monster: undead, pirates, rats and lycanthropes. In the first and fourth combats everyone simultaneously plays a single card; in the second two cards; and in the third three cards. The aim is to play the highest total value, with a majority of coloured cards breaking ties (undead have no colour). However, any played rats switch the win condition to the lowest value — unless a lycanthrope is played, which negates that power.

It’s as simple as that, offering some lightweight tactical fun that should make this game ideal for playing with children. But Shardhunters’ creators settled on a dark fantasy theme which apparently required many of its female heroes to be portrayed as bosom-thrusting (or revealing) sex objects, from Shena The Damned to (ugh) Natasha The Seducer. It’s a bit sad really, and you don’t need to be a prude to find it offputting. With a very different visual style (what’s wrong with cute and cartoony?), this could have been a commendable family-friendly game. 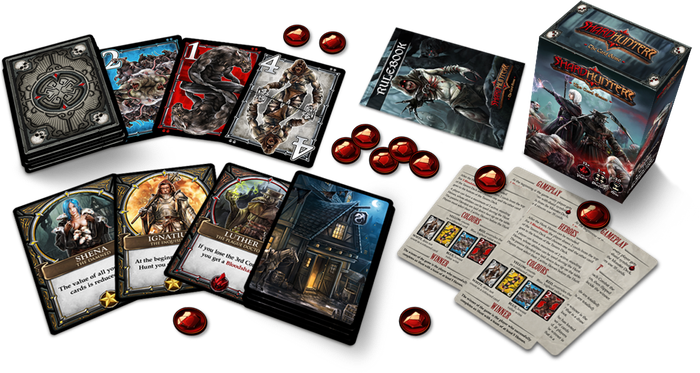