Perhaps what makes the humble zombie such an enduring monster is his inevitability; no matter how many you kill, they’ll always be more behind him shambling relentlessly forward. Run, Fight or Die: Reloaded attempts to capture this with frantic, fast-pasted action that sees players fending off never-ending waves of undead hordes. A reboot of 2014’s Run, Fight or Die! from Greyfox Games, Reloaded brings a streamlined rules system and a more cartoony art style. Having not played the original title, I can only judge the game on its own merits, though the basic premise remains the same between both.

At its core Run, Fight or Die is about taking calculated risks and allocating resources. Each player gets a board divided into three areas representing distances from the survivor; zombies that make it to the player’s character do a single wound each. During their turn the player rolls six d6s with different results on each side. The undead die spawns a zombie, a baseball bat kills two in the nearest zone and a gun kills one in any zone. A run shifts zombies back a pace, and players can shunt them onto another player’s board if they’re on the furthest zone. Loot results let players draw follower or item cards, whilst maps force players to draw a new location. Depending on how many map results are rolled, a new location will confer a negative or positive effect, or both. A player can make up to two rerolls per turn, except for zombie dice, and at the end of a turn all zombies will shuffle up one zone. Players may also accidentally unleash the mutant zombie, who’ll generally make life more difficult. A game ends when one player dies, the mutant zombie reaches the bottom of his hit point pool or when the Town Line card is drawn from the location deck.

This, in a nutshell, is the game, and it can be picked up within the space of five minutes. It’s clearly been made for lovers of the zombie genre, and it takes every opportunity it can to reuse the old familiar tropes with bare-faced glee. The characters are all iterations of stock archetypes – the grizzled army vet, the prom queen, the sexy ex-cop – whilst many of the cards and tokens pay overt homage to The Evil Dead films.

Where Run, Fight or Die occasionally stumbles is in its execution. As simple as the rules are, a number of omissions and ambiguities leave them feeling slightly slapdash at times. It’s not clear, for example, how character special effects that show only two lines of dice work, and it took a thread on boardgamgeek.com to reveal the answer (the bottom result is changed to the top). Nor, again, is it clarified whether discard decks are reshuffled when the main deck is exhausted, although it seems obvious to assume they are. Though flaws like these aren’t game-breaking, you get the impression that they’re likely down to the game being Kickstarter-funded, and that the designers have assumed players will already be onboard with the mechanics as a result. 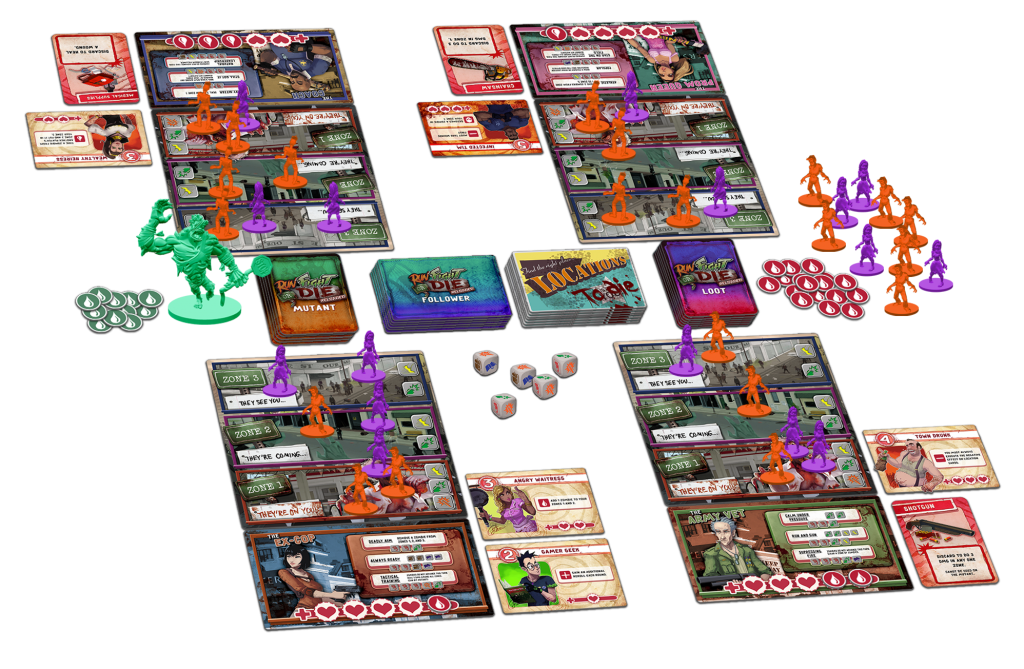 Other niggles include the fact that you’ll likely run out of zombies by the late game if you’re playing a full four-player match, and that the game’s solo campaign mode requires additional purchases to play, which both come across as a bit cheap. One missed opportunity as well was not having the mutant zombie spawn in on the following player’s turn when activated, which would have sped up play by incentivising players to draw map cards more frequently.

It’s hard to let these negatives detract from the game too much, as what Run, Fight or Die offers in spades is sheer, addictive fun. It’s a light-hearted affair, and it makes a great afternoon killer with some friends if you’ve got nothing planned. This is in spite of the fact that there’s really only one way to play Run, Fight or Die, which is to always use loot rolls to draw followers whenever feasible. Since followers not only offer the main way of scoring victory points but also a supply of ablative wounds, in the vast majority of cases it makes sense to hoover up as many as you can as quickly as possible and tank the negative effects of the sucky ones. But its lack of playstyles is made up for by the tactical planning it offers on a moment-to-moment level, and letting players choose what order they activate their dice results offers a great deal of strategic flexibility. Besides, there’s something childishly appealing about mowing down the legions of zombies with a well-played card or dice roll.

A zombie-killing splatter-fest that’s rough around the edges with plenty of heart, Run, Fight or Die: Reloaded apes the zombie B-movies that inspired it in the best sort of way.

Despite some loose threads in its rules design, Run, Fight or Die: Reloaded provides an experience that can truly be said to be… Groovy.

TRY THIS IF YOU LIKED… ZOMBIE DICE

If you’re itching for more ways to dice with the dead, this beer-and-pretzels zombie game puts you in the scuﬀed shoes of a shambling ghoul as you roll bones, munch brains and try not to get shotgunned.