Welcome back to a broader, more dangerous Midgard

Reavers of Midgard sees Grey Fox Games storming back to the vibrant viking world established in 2015’s acclaimed Champions of Midgard. Taking the key elements of worker placement and dice rolling from Ole Steiness’ first game, and giving them a fresh twist, new designer JB Howell has ramped up the complexity and scope, to deliver an impressive blockbuster sequel.

As masters of battle scarred longships, players will traverse both sea and land seeking fame and riches. Your heroic crew will come and go as you face off against both man and beast in brutal sea battles, and plunder through the various villages and keeps across the land. There are territories to subdue and destinies to fulfil, all whilst building an admirable haul of pillaged treasure.

Whilst Champions of Midgard sat comfortably at the lighter end of worker placement games, alongside titles such as Lords of Waterdeep and Stone Age, Reavers elevates itself to somewhere between mid and heavyweight. Despite a total of only six action spaces to place a single worker each turn (two workers in the two player game), the game still manages to offer an often overwhelming level of choice. Add to that elements of set collection and engine building, Reavers quickly joins the ranks of other crunchy, weighty Euros.

This jump in scale is notable in the game’s setting too, with the action departing from the small harbour town of Champions to Reavers’ wider, more dangerous lands. Indeed, there are loftier goals to pursue here on your path to glory, exemplified by the game’s generous wealth of choices and rewards. This generosity comes through in the sheer volume of riches players will receive throughout the game, with each turn regularly doling out dozens of cards and dice. Whilst overwhelming at first, this abundance quickly leads to a satisfying and evocative sense of progress. 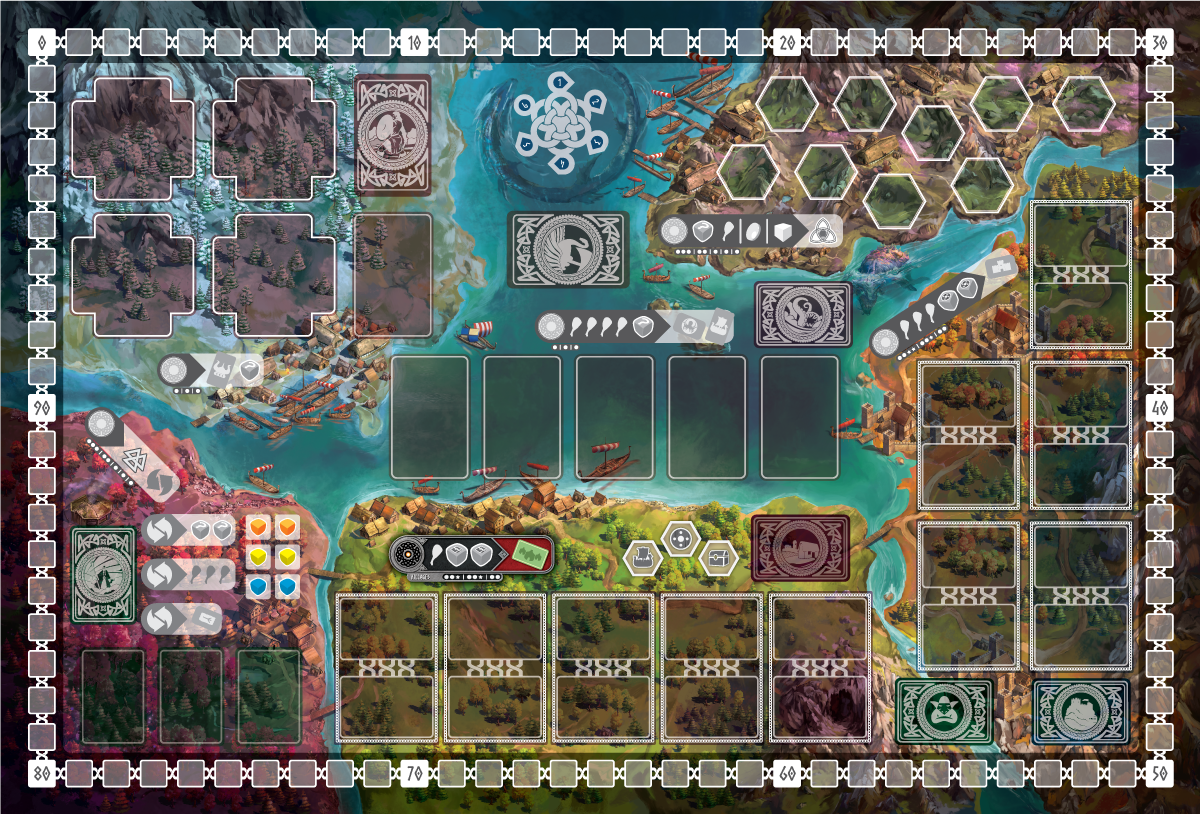 The path to becoming a successful Reaver plays out largely through the use of dice and cards acquired through a neat spin on worker placement. Each round will see the starting player choose a space on the board with their longboat meeple, before taking that space’s action and receiving a generous bonus. All other players have the option to take that same action, receiving sequentially lesser bonuses until the next player places their meeple and the process repeats. It’s a great mechanism that reduces downtime and keeps everyone invested.

Action spaces typically dish out cards used for set collection, monster cards to fight, and Reaver cards to gain crew dice, alongside resources and end of round scoring territory tiles. Reaver cards are collected in pairs and immediately give players a specific number of coloured dice to roll. The results are placed on personal ship boards, ready to be spent on future action spaces or combat resolutions. The multi-use Reaver cards are then chosen to be either discarded for more dice, promoted to leaders for immediate bonuses and dice mitigation options, or added to players’ ‘engines’ beneath their personal board, making actions more powerful.

Occasional splashes of theme come through in the form of Terror. These negative point scoring tokens are bestowed upon those feeling dastardly enough to pillage that little bit extra from villages. Of course, there’s always the option to settle for less, but what aspirational Reaver would succumb to such timidity? Aside from this, the game’s mechanics do little to truly justify the viking theme. Thankfully, the gorgeous artwork from Yaroslav Radeckyi brings Midgard to life upon the tabletop.

Reavers of Midgard proudly possesses that perfect combination of easy to learn but tough to master. Exciting and unexpected moments of intense decision making are regularly thrust upon players. Clear cut paths to victory are suddenly thrown off course, encouraging the pursuit of new ones or the interruption of an opponent’s. It is this level of dynamism across the game’s relatively swift six rounds that sets it apart from other similar sized but more gently paced Euros. Pair this with an enticing setting and a bright aesthetic often missing from Euro-style games, and you have a recipe for game-night success.

Reavers of Midgard is a triumphant sequel, stepping up the complexity and strategic options whilst still remaining accessible to casual players. The exciting uncertainty of how your game-plan might play out, paired with how the game generously churns out cards, dice, and options without feeling bloated is a testament to its careful design.

TRY THIS IF YOU LIKED… CHAMPIONS OF MIDGARD

If you’re looking to venture into the heavier side of Euro games but don’t fancy swapping your mighty warrior lifestyle for that of a Mediterranean trader, then Reavers of Midgard is a safe bet.