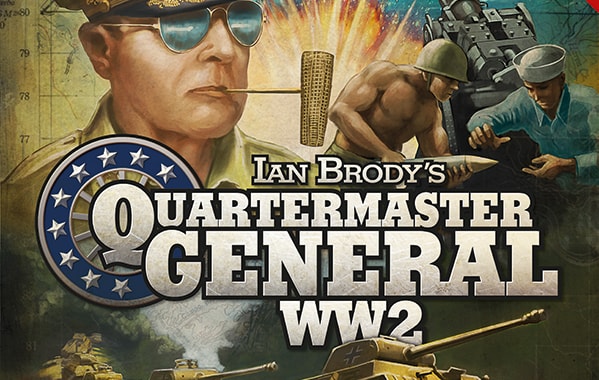 An army may march on its stomach, but this game is no crawler

Logistics, as the old adage goes, is the lifeblood of war. For every plane, ship and soldier there exists an entire network of complex organisational chains designed to keep them supplied and in the field. Quartermaster General WW2 Second Edition acknowledges this essential truth and creates a lean, fast-paced game out of it.

The game approaches the Second World War at a grand strategic level, with players assuming the roles of nations fighting across the world stage. This premise – and the game’s admittedly rather stodgy name – initially call to mind the kind of sprawling, token-laden affair that’s more of a lifestyle choice than a game, but this couldn’t be further from the truth. Instead, Quartermaster General WW2 is essentially a card-driven game with a map that has players making crucial tactical decisions without any bookkeeping or referring to tables of any kind. 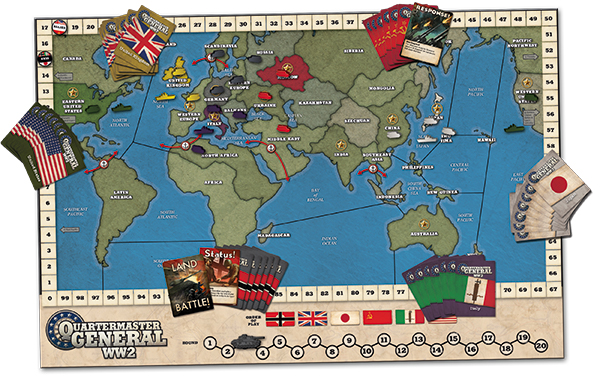 Each nation is equipped with its own deck of cards and armed forces comprised of tank (land force) and ship (sea force) tokens. The sizes of these armed forces vary in keeping with the historical realities of the conflict; Germany and the United States have the largest militaries, whilst Italy has the smallest. Likewise, the decks are tailored to each country, and consist of cards that allow them to perform one of eight actions – build a navy or army, fight a sea or land battle, conduct economic warfare or play a status, event or response. Events usually result in something happening the turn they’re played, whilst response cards are played facedown and can be triggered during an opponent’s turn. Status cards are used almost like passive buffs, and have to be played first before their effect – either one-off or continual – can be used the following turn.

The crucial thing to understand about Quartermaster General WW2 is that it’s not really about the battles. Fighting is as simple as playing a battle card and removing an enemy token in a space adjacent to one of yours, unless your opponent triggers a response card to prevent it. Instead, the real meat of the gameplay comes from resource management and timely decision making.

Several mechanics are chiefly responsible for this. First, army and navy tokens represent just as much a link in a logistical route as they do a fighting force, and after being placed can’t be moved around the board. As a result, players have to daisy-chain their way around the map with what tokens they have their disposal. Key nations in the conflict are marked as supply spaces, and forces that get cut off from them disappear the following turn. Secondly, a country’s deck is itself a resource. A new deck isn’t created from the discard pile when a deck runs out, so each nation only has access to a limited number of actions in a game, making choices about which cards to use and discard, and when, vital. Lastly, that the effects of response and event cards only occur after they’ve been placed from a hand means players are forced to devote time to forward planning.

The result is a game that captures the titanic feeling of the Second World War, where victory comes down to a mixture of preparation and making tough choices at the right time. Thanks to the smart design of the decks, the size of the various militaries and a fixed turn sequence that determines which country goes when, each nation follows the broad brushstrokes of its historical counterpart in terms of how it plays and the challenges it faces.

The second edition of the game adds only minor tweaks, the most significant being making the formerly optional rule of giving victory to the side that’s 30 points ahead at any time standard, further speeding up play and avoiding a drawn-out defeat. With this new version out, anyone who’s ever wanted to play a game about war in the big picture owes it to themselves to play Quartermaster General WW2. The game is a tight, polished experience that emphasises strategising and planning whilst providing gameplay that feels weighty and realistic, without having to rely on a tome-like ruleset or cumbersome minutiae to do so.

Quartermaster General WW2 is an extraordinarily well-designed game, successfully capturing the feeling of playing out all of World War Two in the space of an hour and a half.

This entry into the venerable World War Two strategy series is a slightly lighter affair than other versions, providing an entry point for those looking to assume the mantle of command again.