Rory O’Connor describes himself as a designer of “games with heart”, which makes sense if you’ve played 2018’s emotional heavy-hitter Holding On: The Troubled Life of Billy Kerr, or even his hugely popular debut Rory’s Story Cubes (see page nine). So it may come as a surprise to learn that his latest title is… An arena battle game?

In Prisma Arena, two-to-four players each control a character who must triumph in a swift, slick sci-fi battle royale, involving grappling, energy blasting and powered monster sidekicks. Yet even the swiftest scan of the game’s art and style will tip you off to the fact that it’s not gonna be awash in blood, gore and testosterone. The characters are big-eyed, anime-ish youths (none of whom, incidentally, are either white or specifically gendered), while their monstrous companions are cute and colourful, looking more like Pokémon or the cast of a trippy, ’80s Saturday-morning kids’ cartoon, with barely a tooth or claw between them. Meanwhile, the arena in which they scrap resembles a cosmic disco, complete with obstacles that appear to be gigantic glow-sticks.

Despite its combative core, Prisma Arena brims with positivity. The setting is the world of Beacon, where young Guardians train to become ‘protectors of Hope in the Time of Despair’. The eponymous battleground is a training camp, where you spar with pals to master the art of Prismakata, by which Guardians learn to channel their inner light. And the monsters? They’re actually manifestations of different emotional states, such as the affectionate Grawva who has a ‘hug’ ability, or the confident Dawna, who can buff your hero through encouragement. The message here is that any emotion, even a negative one (such as jealousy or anger), can be embraced and moulded into a beneficial effect.

As such, Prisma Arena feels ideally pitched as a family game, or one to introduce younger players to tabletop combat in a supremely safe environment. Accordingly, its rules are simple and straightforwardly presented as ‘Lessons’ which gradually ease you into the game. It also sidesteps the potential frustrations of dice rolling by focusing on a slick, card-based combat system, which allows you to chain pleasing combos using cards drawn from a small personal deck. And in the interests of fairness, any of your played cards are passed to the next player to join their deck, meaning it’s impossible to dominate by hoarding the most powerful moves. Oh, and no-one dies; they just bounce back during their next turn, with the winner decided by points.

In a really lovely touch, the character standees can be customised using reusable stickers, while levelling up your hero rewards you with new outfits to dress them in (these can be kept in a personal character ‘locker’, while resealable pouches are included to store all your character’s bits and pieces). So in this welcome import from the videogame world there is an element of creativity and personalisation, too.

Given its family focus, some older players may find the game lacking in the kind of gritty, tactical depth they usually expect, and it does feel like it’s begging for further scenarios and expansions – as if it’s just the pilot episode in a possible animated saga. These would be welcome, though. While Prisma Arena’s beaming, teenie-toony upbeatness won’t be to everyone’s taste, it does feel like a refreshing change to the genre that deserves to be embraced.

A light, bright kid-friendly combat game which feels like a blend of Avatar: The Last Airbender, Pokémon and Pixar’s Inside Out.

TRY THIS IF YOU LIKED WILDLANDS… 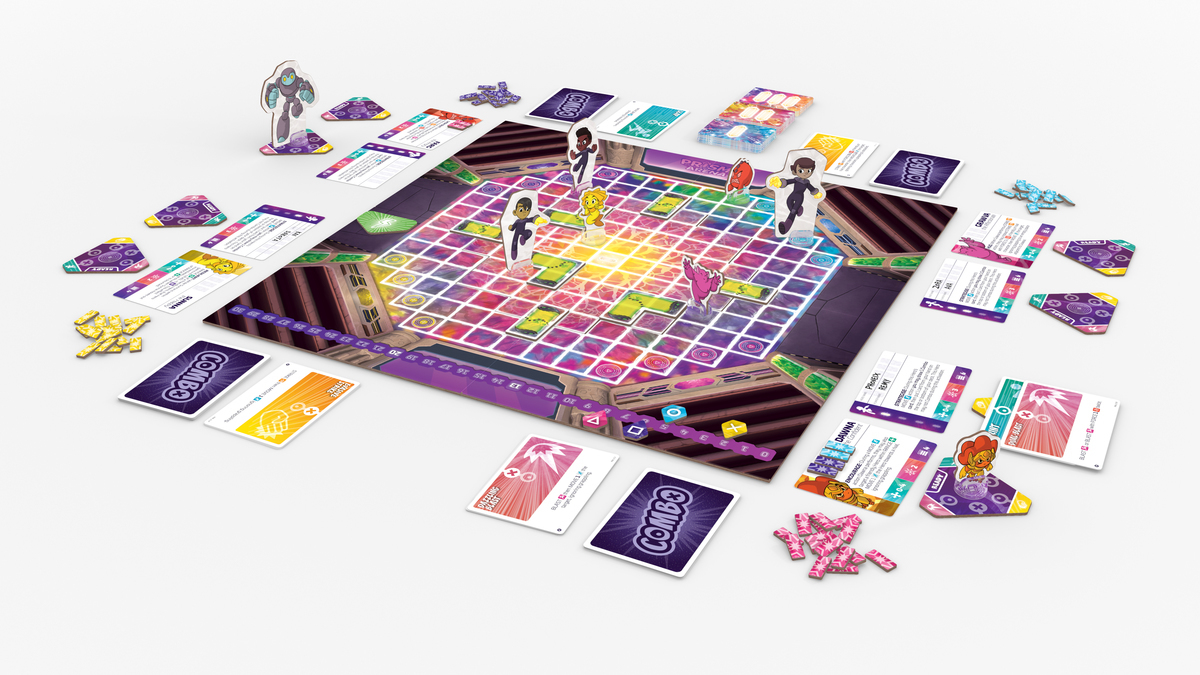