Is this energy-themed spin-off a bright spark or lump of coal?

If the original Power Grid is a slow-burning coal fire, Power Grid: The Card Game hopes to be an electric heater, providing almost the same level of warmth and enjoyment with a fraction of the time and cost required.

Power Grid: TCG’s gameplay operates essentially as a condensed variation of Power Grid, stripping away the need to purchase cities and manage their network on a central map board. Instead, the focus is placed on the bidding and auction mechanics of the first two rounds, as players compete to acquire power plants, purchase the resources necessary to generate electricity and earn the in-game elektro currency. As such, play time is effectively halved, dropping from an estimated two hours for a match to under 60 minutes.

The art style on the plant cards will be familiar to those accustomed to the game’s bigger tabletop sibling, with the same loose cartoon aesthetic and vivid colour-coding to clearly identify each key resource: coal, gas, oil and uranium, plus the green eco-friendly plants that require no resources to run.

Players take it in turns to bring one of the four power plants in the current market to auction, outbidding each other until someone claims the plant – though with only one purchase per player permitted each round, choosing when to place a bid and when to sit out can be key. The cheapest plant of the set always costs just one elektro (signified by an adorable wooden ‘1’ marker), meaning a bargain can be nabbed with tactical bidding – or enough cash to see off your rivals.

As in Power Grid, elektro is represented by different denominations of Monopoly-like paper bank notes – amusingly thematic, but likely to end up torn, crumbled and looking the worse for wear after one too many plays. Perhaps more conventional – if less physically satisfying – cardboard makers would have been a more robust material choice. 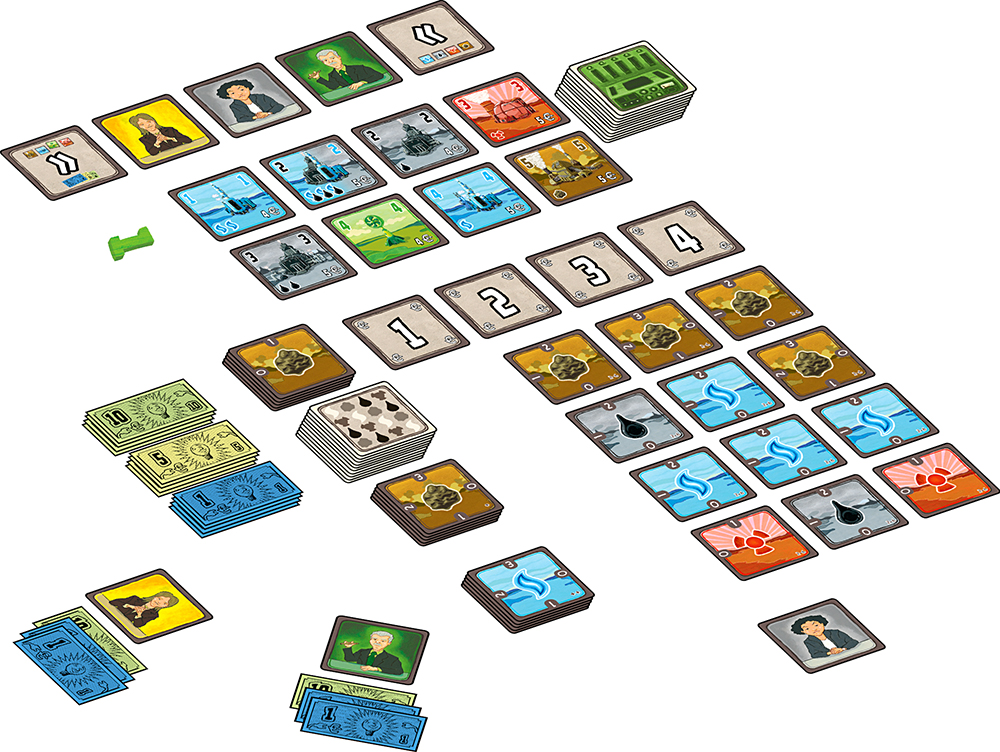 The player turn order – decided by the earnings of the previous round – runs backwards for the second phase, in which vital resources are purchased in order to run each player’s plants. The square resource cards are shrewdly designed with decreasing figures on each of their sides, meaning they are simply rotated to represent the exhaustion of resources as plants are powered up and generate income.

Play proceeds until a final round is triggered, final plants and resources are purchased and plants generate victory points instead of elektro, with any leftover cash also having the chance to earn VP.

As with most bidding titles, the core of Power Grid: TCG shines with larger groups – a two-player duel involves the use of an AI ‘Trust’ player who eats up plants and resources without generating money, which helps introduce variation but fails to match the unpredictable actions and strategy of a fellow living rival.

An included gameplay variant allows players to reclaim some of their money from scrapped plants, with the amount recovered rising with each discarded plan. In a particularly nice touch – and highlighting the strong similarity between the games’ mechanics – the expansion can also be used with the original Power Grid.

Power Grid: TCG ultimately finds itself in an awkward position. Without the map management elements, it’s unlikely to be deep enough to satisfy the wants of seasoned Power Grid fans (who are better off playing the original if they have time), while the bidding mechanics, despite being solid and enjoyable, aren’t strong enough on their own to tempt in newcomers to the series. The theme remains strong and the gameplay engaging enough to fill 45 minutes – but don’t expect to hanker for a second match.

The energy-generating theme is still a winner, but Power Grid: TCG’s bidding mechanics aren’t sturdy enough to serve as the solo foundation of this spin-off. Existing fans may relish the chance for a more time-friendly and portable way to enjoy part of the game they already love, but it’s hard to see anyone else being drawn in.