Does this lightweight marble-matcher have the formula for success?

Given the massive money-spinning success of match-three video games such as Candy Crush and Bejeweled on mobiles, it’s perhaps surprising that few tabletop games have attempted to cash in on the booming market.

In steps Potion Explosion, a smart translation of shifting coloured pixels around a touchscreen to the satisfying physicality of cardboard and marbles, wrapped up in a pseudo-Harry Potter theme.

Between two and four players are plonked in the pointed hats and oversized black robes of students taking their final potions exams at the Horribilorum Sorcery Academy for Witty Witches and Wizards.

Each is then equipped with a cardboard brewing desk, complete with two slots for potion flasks and a spare storage container.
The flasks are divided into up to four coloured sections – black, yellow, red and blue – with an accompanying number of holes poked out. (Seriously, get ready to pop out hundreds of tiny card dots the first time you setup – it took us around 15 to 20 minutes with three adults on the task.) The holes are there to cradle matching coloured marble 'ingredients', which sit in four channels running down a cardboard dispenser placed in the middle of the table.

Every turn, players can pick up an ingredient from the visible rows and pop it in a corresponding slot on one of their potions, or store it for later use.

Here’s where things get interesting. As the dispenser's rows are angled, the remaining marbles will roll down once a space is made. If two marbles of the same colour that weren’t touching before bump into each other, they ‘explode’. (Not literally – no need for protective goggles here, unless a sore loser starts throwing marbles around.)That player then picks up all of the matching ingredients that ended up together. This can cause subsequent explosions and handfuls of marbles collected, quickly filling up potions. Any leftover ingredients – the storage flask only has room for three marbles – are dumped back into the dispenser’s tank and cycle back around, with completed potions removed, replaced with an empty card and placed underneath. 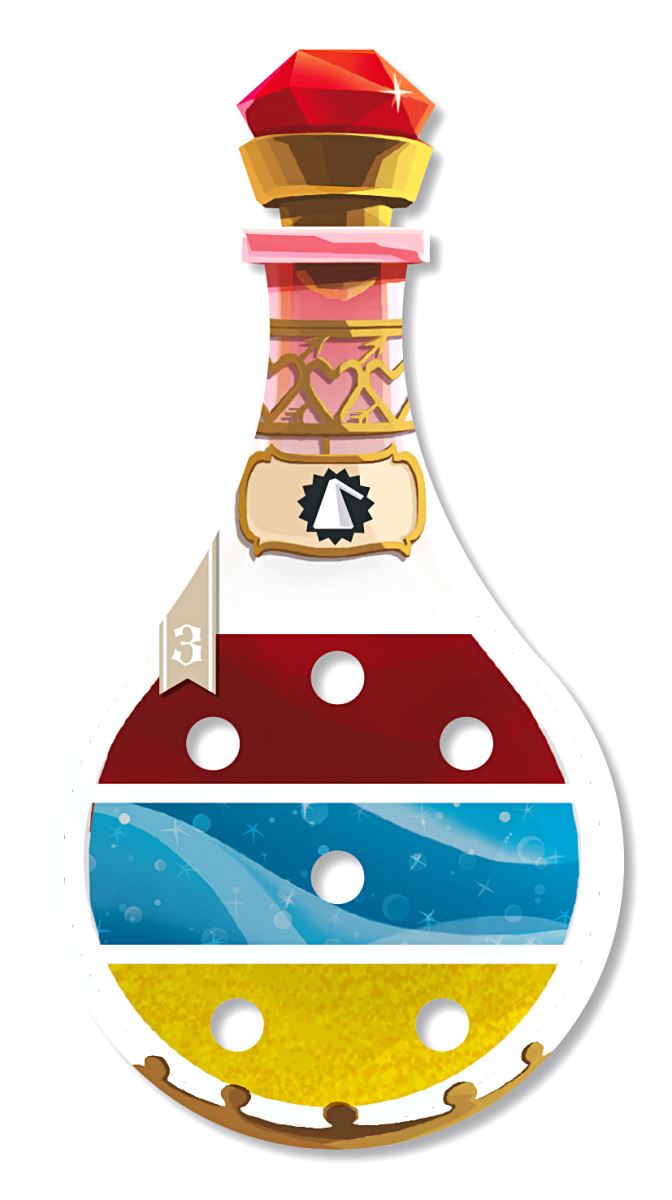 Each successfully concocted potion card has a point value, with – you guessed it – more required ingredients resulting in more points. At the start of the game, a specific number of separate skills point tokens are placed to the side as a ‘countdown’ stack. (We used five.) These extra tokens are earned by either completing five potions of any kind or three matching types of potion – distinguished by the decorative corks in the top of each – and grant an extra four points apiece. When the stack runs out, the game is over, and players tot up their final score to decide a winner. Two points are deducted for each ‘Little Help’ token that players have used, which allow them to collect an extra marble from the dispenser at any point during their turn – but explosions do not occur. At least in the games we played, nobody felt the urge to use a Little Help token, but they make sense as an additional risk-reward mechanic.

Brewing potions wouldn’t be much fun without being able to drink them but, luckily, Potion Explosion doesn’t take the joy of necking a mysterious bottle of bright purple liquid away. At any point during their turn, players can choose to drink a finished potion without losing the points they collected for completing it. The card is rotated upside down and one of eight powers kicks in immediately, ranging from the simple ability to pick up a single extra marble to allowing stored ingredients to be used as any colour – although none of them can directly trigger an explosion. With only cryptic icons on the neck of each bottle and a full explanation at the back of the rulebook, powers can be a little awkward to understand and remember to begin with, but quickly become the strategic crux of the game as players learn to tactically set up multiple chain reactions.

It’s a relatively fun, if straightforward, affair, and an ideal way to hook younger children who might be glued to Candy Crush on a daily basis into understanding core tabletop mechanics such as forward planning – although bear in mind that the game is rated 14-plus, presumably to avoid the risk of swallowed marbles by smaller witches and wizards. With more than two players, gameplay can drag a little and become somewhat of a waiting game in the middle if certain ingredient colours become scarce but, with a rough playing time of around half an hour, it’s never long enough to become a big problem.

What is more of an issue is the quality of the components. On first open, the box is stacked with sheet upon sheet of cardboard pieces that require pressing out. So far, so board game. For us, trouble arose when removing the sections needed to build the ingredient dispenser, which include various tabs and slots to hold the construction together. Edges weren’t fully pre-scored, leaving fuzzy cardboard mess along many of the more fiddly bits and – in some cases – peeling or tearing some of the printed graphics away, leaving ugly patches of white. We suffered similar issues when pressing out the 64 potion tiles, several of which also ended up with peeling sides or ripped images.

This lack of polish sadly extends to the marbles; while an extra handful of replacements are included with the 80 required to play, many were misshapen with flat sides and inconsistent colouring. At one point, a warped marble held up play by becoming stuck on its flat edge inside the dispenser, leading our group to tap the tank until it dislodged and rolled down the channel as planned. Despite the rulebook’s fun magical aesthetic and vibrant images, it too suffers from an overall dearth of finish, with some printed images stretched to the point of pixelated distortion.

Having said that, once the dispenser is built it feels reasonably solid for a cardboard creation and – when the marbles roll as planned – there’s a very satisfying physicality to the gameplay. That's something that a screen can’t quite match.

The magical theme is sure to be a cute crowd-pleaser and the use of marbles as a real-life counterpart for mobile match-three games makes Potion Explosion a fun, if shallow, blast. (Pun intended.) It’s just a shame that the quality of the components lets the overall package down.

Publisher: Cool Mini or Not