Plague Inc: The Board Game review Plague Inc: The Board Game

Wiping out humanity has rarely been so much fun

Have you ever found yourself playing Pandemic only to think, “I know we’re trying to save the world and all, but I can really relate to these diseases’ attempt to eliminate humankind”? Even if you’re not quite that misanthropic, there’s an amusing gallows humour to Plague Inc: The Board Game’s turning of the Pandemic formula on its head, as players take control of the killer infections and try to send billions to their unfortunate demise.

If you’ve played Plague Inc on mobile, PC or console, the gaudy colour palette of the board game will be instantly familiar. The vibrant hues make for an arresting tabletop vision, and the design resembles the video game’s user interface, with stripped back yet clear icons and layouts that beg to be prodded with a finger. The similarities extend past looks – the board game’s snappy and simple gameplay captures the feel of playing on your iPhone, with the same benefits and drawbacks.

The crux of the game is controlling countries, which earns DNA points. These neatly double as both victory points and currency to purchase traits for your evolving disease, such as the ability to infect locations with specific environmental barriers, such as airports or extreme climate. There’s not a great mechanical variety in these traits, but the use of DNA points as both game-winning score and currency is clever as a concept, forcing you to consider whether paying for an improved trait later in the game is worth the potential points catch-up required.

Killing fully infected countries is the key way to obtain DNA points – but there’s a catch. Once all of the cities in a region are infected, the player who has the most cities and therefore controls the country must roll the blood-splattered death die to see if the region is wiped off the map, earning all of the players in the country bonus points and event cards. There’s an interesting duality to eliminating countries, as holding certain countries can make infecting connected regions much easier – so it can sometimes pay off to keep a country on its knees instead of swinging the sword. 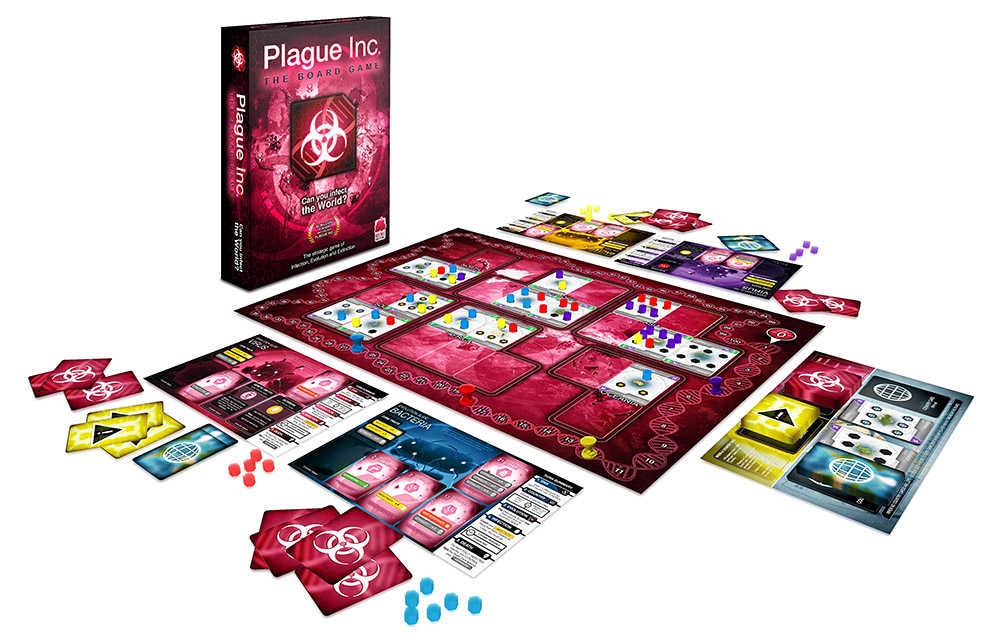 At the same time, players are punished if all of their disease tokens are wiped off the map, which can make forcing a rival to kill their last habitat a potentially advantageous move. It’s a simple but effective way of introducing more risk-reward strategy decisions and player interaction. This is aided by the event cards, which offer the opportunity to impede your opponents more directly. The manual suggests removing them for a less confrontational match, but we’d argue they’re key to making the game a deeper and more fulfilling experience.

Although it shares little in common with Pandemic beyond the theme of global infection, Plague Inc is another fine example of a gateway game – especially if the tabletop newcomer is already a fan of the video game. There’s enough theme, strategy and competition to make for an engrossing hour, without becoming bogged down in complex mechanics or potentially off-putting over-aggression from experienced players. The box includes several options to customise the game, including the chance to play as a virus with altered rules, randomise players’ starting locations and adjustn the game’s length slightly. They’re little touches, but highlight the game’s welcoming nature.

Plague Inc is likely a little strategically shallow for those who have already played medium-weight strategy titles or have no investment in the video game. That doesn’t discredit its achievement in accurately bringing its inspiration to the tabletop – much like the video game, this is a fun way to spend an hour or two indulging in an entertaining theme, eye-catching design and simple gameplay. Only now you can enjoy it all with friends. The importance of that shouldn’t go understated.

Whether you’re a fan of the video game or not, Plague Inc is a solid and worthy addition to the strategy genre. The macabre theme goes a long way, helped along by the colourful visuals and easily-understood gameplay – but there’s also a good bit of depth to keep it returning to your tabletop.