A charming gateway game for the younger generation

Designed and illustrated by Tristam Rossin, Pebble Beach Delivery Service is an all-ages pick up and deliver game, positing players as vital members of an adorable island community. At the helms of their trusty vessels, two to four players will assume the roles of cute animal folk, delivering packages and passengers around the archipelago. Along the way there will be run-ins with pirates, sharks, and whirlpools, as well as Maisy, the friendly whale. With luck and a bit of careful planning, one player will emerge as the winner.

Before we get into gameplay, attention must be drawn to Pebble Rock’s gorgeous production. Tucked inside this small and staggeringly affordable box is a wealth of sturdy cardboard, including a ginormous circular, puzzle-piece board and a dazzling pile of standees. All of this is illustrated with Rossin’s serene and inviting depictions of the various islands, characters, and boats that pepper the seascape.

The quality components and a nostalgic sense of child-like wonder the game exudes, gives Pebble Rock Delivery Service the feel of a pre-existing world – like stepping into a beloved children’s TV programme. Combined with the board’s jumbo scale, the production as a whole has a toy-like feel that should prove irresistible for most kids with a thirst for adventure.

With their curiosity piqued, Rossin wastes no time getting players young and old up and running, thanks to a humorous and well thought out rulebook. Basic turns can be explained in seconds, allowing for other circumstantial rules to be straightened out as they crop up, whilst the actual aim of the game remains as simple as ‘deliver as many packages as you can.’ With that end-goal in sight, players will be taking turns rolling dice and moving their boats between the islands, making sure to refill their cargo as they go.

Keeping things interesting for older players is the element of choice offered when rolling dice. Careful sea captains may wish to stick to the green dice which grant helpful bonuses at the cost of a potentially shorter move. Red dice on the other hand can transport players further but carry the risk of attracting the attention of Larry the Shark and the Dreaded Pirate Roberto, who will snatch precious fish and cargo. Thought has been put into catchup mechanics too, with lagging players being able to roll a combination of the best dice, ensuring there’s no tears at the table.

Three delivery cards placed next to the scoreboard will detail where packages are to be sent and how many, with each one scoring points and being replaced upon completion. For savvy players, aspects of strategy come in to play here when figuring out the most efficient way to deliver cargo and get back to Pebble Rock to restock.

Players can also keep in mind the various areas available for stocking up on fish or items, with the former granting extra movement points and the latter granting various one-time or ongoing powers.

Light as it all may be, these minor changes to the basic roll and move formula are just enough to keep experienced players invested in the game. Furthermore, it’s just a joy to see aspects of more advanced games – such as player boards, dice mitigation, and personal end-game scoring goals – crossing over into a family game so naturally. 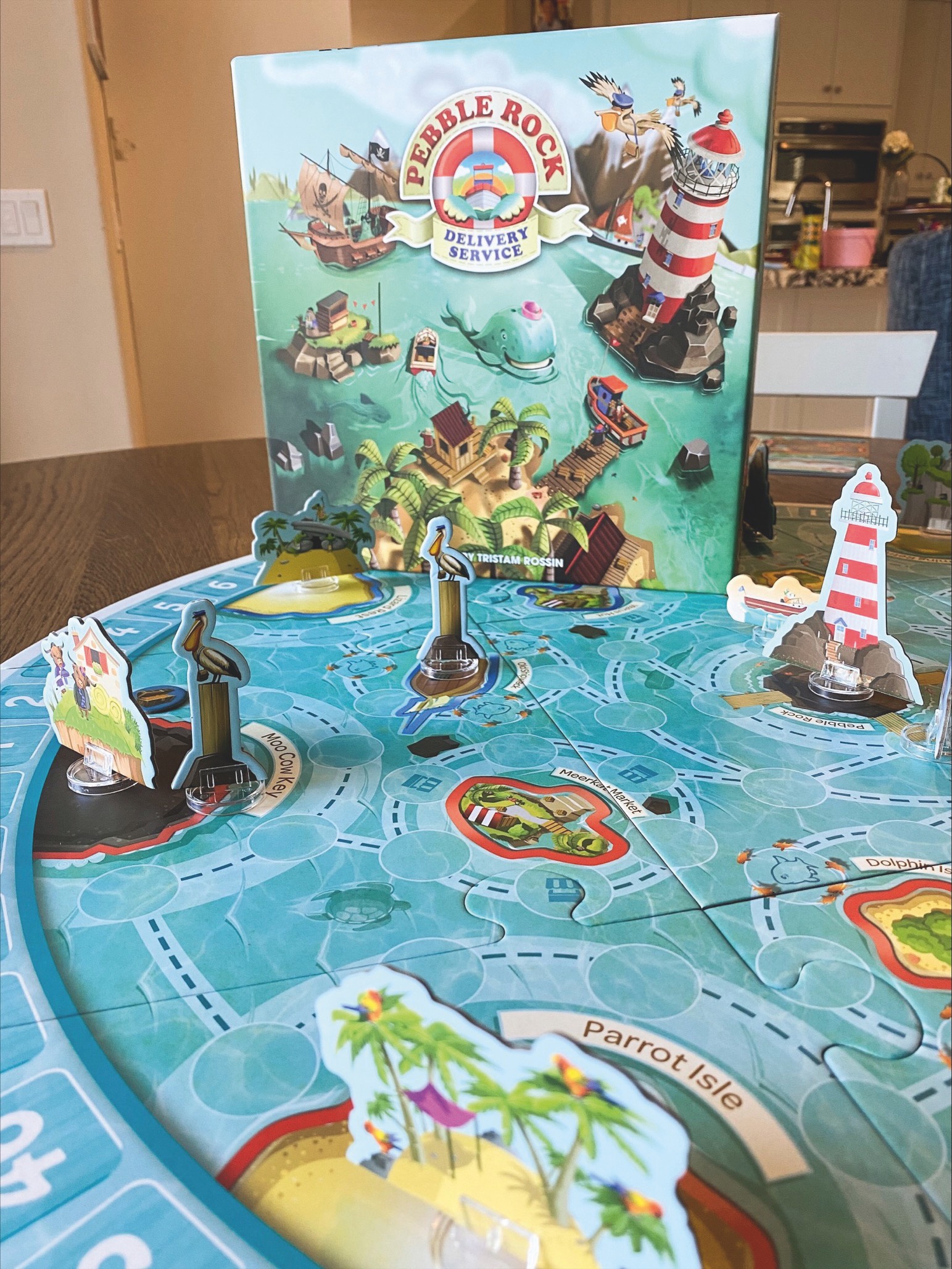 A gorgeous world that proves to be an excellent stepping stone for a future generation of gamers.

TRY THIS IF YOU LIKED ZOMBIE KIDZ EVOLUTION

You can’t go wrong with this pair of excellent entry-level games, made with both adults and children in mind.