Life can be better down where it's wetter...

A first glance at the box and artwork for Oceans suggests a tranquil game. Warm swashes of watercolour (naturally) depict a gentle, whale-like giant gliding beneath a calmly rippling surface, while colourful fish graze amid a colour-burst coral reef. However, much like nature itself, there is viciousness beneath all that beauty. Similar to its land-based counterpart Evolution, this is at heart a game of fierce survival on the most epic, eon-spanning scale imaginable. A game of life in the truest sense.

The bones of Oceans will be familiar to Evolution fans, but this is a separate and distinct entity. Each player must create and evolve subaquatic species using a six-strong hand of trait cards. These are initially played down one per turn, either added to an existing species or used to spawn a new one. Essentially, these sets of cards form an organic engine, whereby species can leech, predate or bottom-feed off each other – or, with careful arrangement, off other players’ species.

You don’t have to play aggressively. If your cards allow, it is possible to get by hoovering up the appealingly colourful fish tokens from the trays at the centre of the table; primarily through foraging at the reef, but also using certain card abilities to gain fish from one of three deeper ocean zones. However, the reef will quickly empty, and it requires the discarding of a potentially useful trait card to repopulate it by migrating fish from the ocean zones. Also, as each zone empties, the game escalates, triggering scenarios (for example, 'Large Predators' which makes any predators on the table even more deadly) and the Cambrian Explosion. This 541-million-year-old evolutionary watershed moment increases the number of cards played per turn to two, doubles your species’ aging rate (which increases your game-end points but also the risk of a species going extinct), and allows you to play cards from the game’s second deck of traits, the Deep deck.

You don’t have to play with the Deep deck, either. Oceans is enjoyable enough with just the Surface cards, which contain all the core traits. But it is so much more fun and challenging once the Deep cards come into play, each unique card offering more advanced traits and raising the stakes considerably. Especially if someone plays 'The Kraken'... 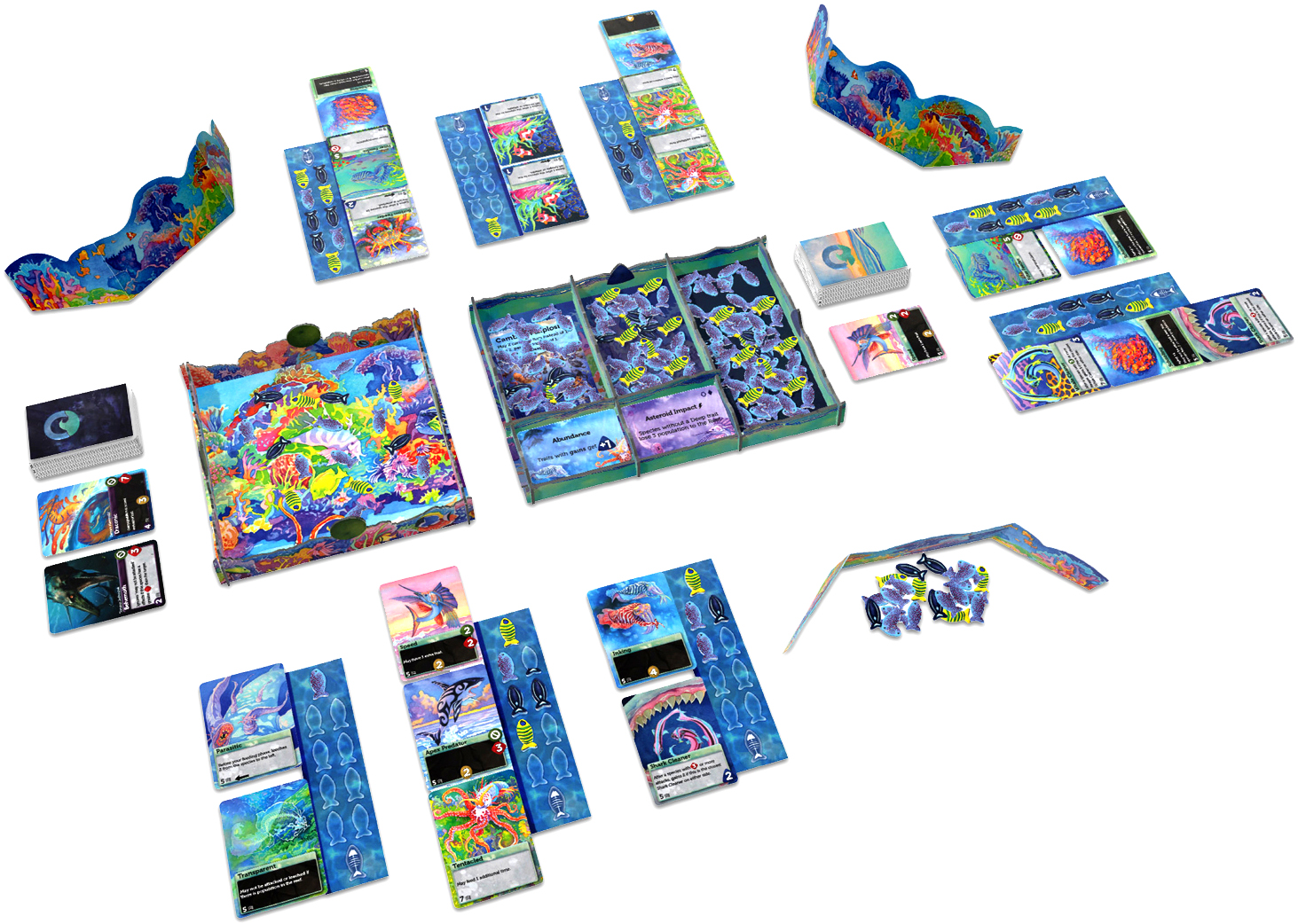 Which brings us back to aggression. Nature thrives on violence, and Oceans really comes alive as all these lovably bizarre sea monsters start picking on each other. Just as species evolve in relation to each other – perhaps developing hard shells after generations of sharp-toothed predator attacks, for example – so Oceans’ gameplay requires flexible strategies and carefully responsive play. If one player’s huge filter-feeder is gaining tons of points per round, it would be rude not to evolve one of your species to an apex predator and get chomping on them. Or maybe turn parasite and lazily leech off them. Of course, they may, in return, evolve transparency and mess your plans up. Which means it’s then up to you to figure out a response to that, before your species' population dries up and it suffers extinction.

The interaction between the cards, both within and between tableaux, is simply ingenious. Once players grow familiar with the Surface traits (and, more gradually, the Deep ones) every game will become a thrillingly close-run contest, each of which requires a different approach to the last. The theme is not only compellingly immersive, it also seeps through every pore of Ocean’s mechanisms. Although ‘mechanism’ feels the wrong word here. Far too inorganic. Everything about this game feels so, well, alive…

Easily one of the best games published so far this year, and you don’t need to be familiar with the Evolution games to appreciate it, either. Go on, take the plunge

TRY THIS IF YOU LIKED EVOLUTION…

Oceans is, after all, part of the same series, even if it doesn’t have the word ‘evolution’ the titles. Lovers of the Blue Planet series should check it out, too.