No Honor Among Thieves Review Dastardly Dealings in the Dark

Sometimes, it’s fun to be the bad guy. Some games let you revel in villainy, with the biggest consequence being someone walking off in a huff. This game lets you be so bad, your table is in danger of being flipped.

No Honor Among Thieves is a card tableau heist game for 3-6 players. Each player is aiming to be the wealthiest criminal gang in the kingdom, as players gather up thugs, pickpockets and gadabouts in order to steal the riches of the upper crust.

Players have up to three actions on a turn, which can be used to recruit or rest characters, draw or playscheme cards and most importantly, go on a heist. Whilst trying to break into jail to gain a new rogue might be a simple enough task (though not entirely without risk) it’s the larger heist tasks which often require two or three players working together to succeed.

Every heist objective will have defences, either printed on the obstacle or drawn from a deck. Most defences have multiple options, such as a locked door that can be overcome with a lot of strength, or a single point in tinker, ensuring that various character combinations are possible. As each player can commit up to two characters to a defence but are limited to four characters at most, it’s vital to ask for assistance, offering a cut of the loot to whoever helps. Making things harder are scheme cards, ways to tweak the difficulty in and out of your favour, as such it's vital to prepare for inevitable spanners in the works, either by bribing others to not interfere or keeping counteractions to thwart them. 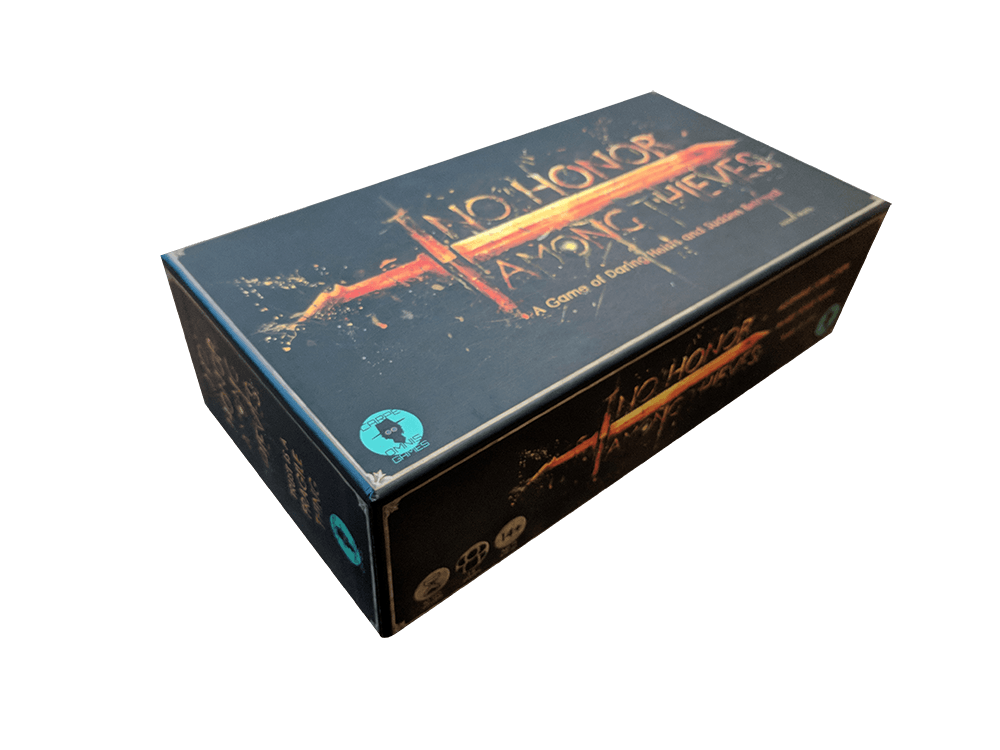 Once the dust settles and players have stopped slinging cards at one another, if the heist team is still capable of defeating every defence, there is a “the moment a truth,” where each player in the heist must choose one card from their hand. If one or more players to reveal a Betrayal card, they snatch gold before it’s shared out as agreed, plunging the game into a “no honour” state. This unlocks nefarious abilities on characters that allow players to steal from one another or even murder characters outright.

This is a game of tension and backstabbing throughout. Money is all that matters, but given that everyone also has two hidden agenda cards that score bonus coins at the end, it’s impossible to know exactly who’s winning. No-one can be trusted and you have to hope that your threats or bargaining skills were enough. Betray too early and you put a target on your back, don’t betray at all and you may find a game-winning pot being snuck away by someone you thought was your ally.

What surprised me most when playing is how often it pays to be reliable. If you stand by your promises (be them good or bad) then players build a grudging respect, which only builds the anticipation for whenever the first betrayal card will get played. Unlike a lot of “gotcha!” mechanics in other games, it’s possible to prepare and foresee a lot of what can happen; if you went on a heist without fortifying your hand with responses, you’ve only yourself to blame.

Still, it cannot be denied that this style of game is very much an acquired taste. If players still hold grudges for past losses or get upset when their plans are squashed utterly, this game will bring you nothing but heartbreak. For those relish in those actions, No Honor Among Thieves may prove a popular choice for an evening of dark deeds.

If your play group likes to get cutthroat and backstabby, few other games deliver on this theme better. A great night of tension and betrayal awaits.

TRY THIS IF YOU LIKED Survive: Escape from Atlantis!

Both games balance negotiating and lying with little time between betrayals, Survive may be a quicker to complete but No Honor uses it’s longer time frame for a greater build-up of tension.