Night of the Ninja Review Gather your mercenary powers and get ready to take out enemy ninjas… just as soon as you can work out who they are. 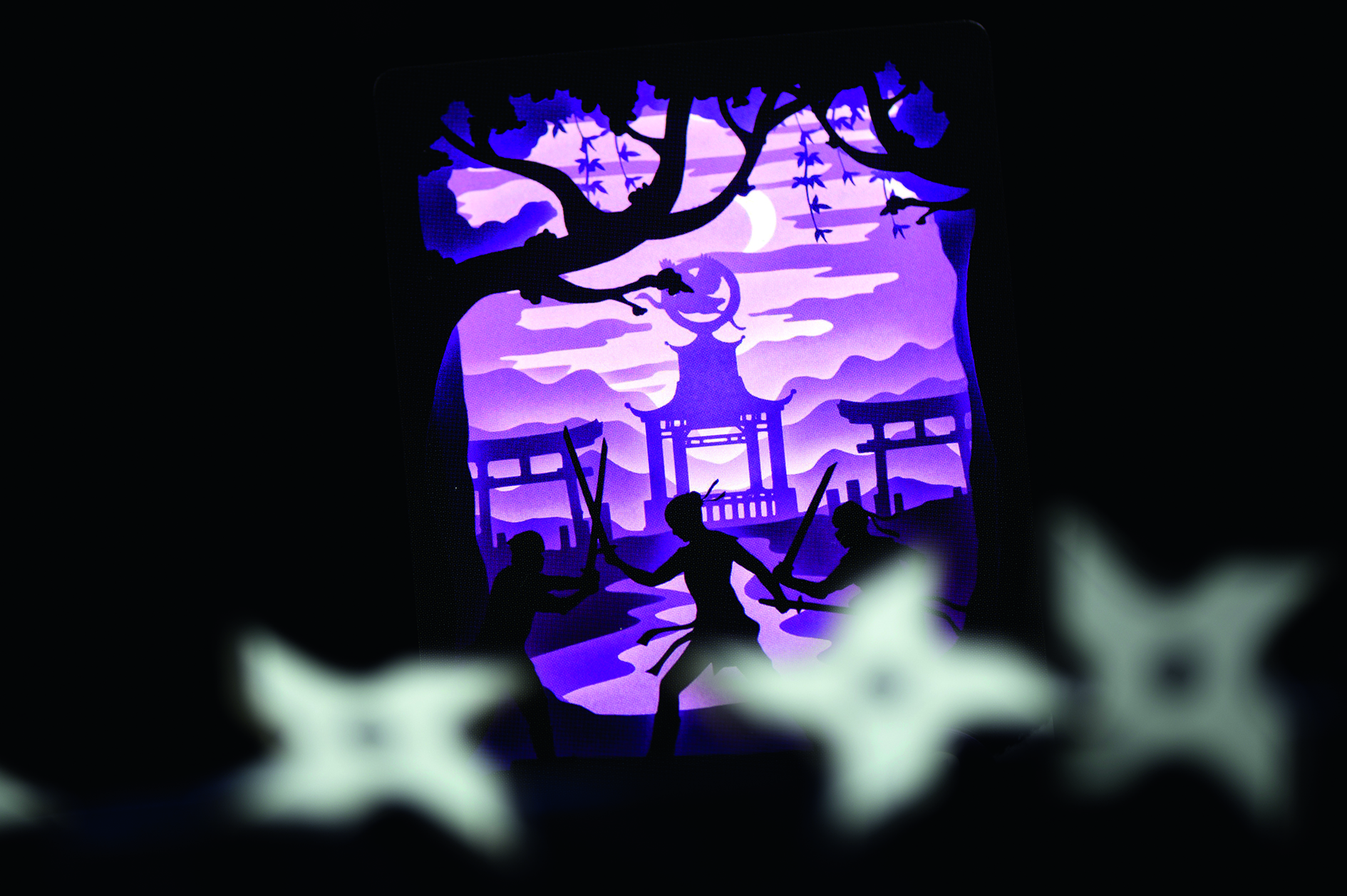 Night of the Ninja earns its place in the crowded social deduction genre. This is a competitive game and ultimately it’s every player for themselves, but different teams are created each round and forging alliances will help you triumph. The game splendidly dances the line between team and solo play, hurling you close to some players before throwing everything up in the air again.

Each round your House card indicates your allegiance to Lotus or Crane and the rank denotes your status within that house. The team with the highest ranked player still standing at the end of the round, wins. But brilliantly, even dead players on the winning team will get points. So sacrificing yourself for the good of the house is a valid and potentially fruitful strategy. With an odd number of players, the Ronin is added. The Ronin’s aim is simply to survive the round.

But surviving is not always simple. Every player drafts two Ninja cards, which fall into five categories – Spy, Mystic, Trickster, Blind Assassin and Shinobi. Spies and Mystics let you look at other player’s cards while Blind Assassins and Shinobis can kill other players. Tricksters are all different, providing variety and causing chaos. Ninja cards are numbered within each category and played out in a specific order, so it’s perfectly possible for a player to dramatically assassinate you just before you were planning to assassinate them.

Ninja cards may be retained instead of played, which adds nuance and aids bluffing. You may convince others that you have the power to kill in a future phase, or that you hold one of the two special cards that allow you to benefit from an attempted assassination. These reaction cards – along with the Mastermind card, which causes your house to win if you’re still standing – provide delightful twists of fate and dramatic reveals accompanied by evil laughter.

You can play Night of the Ninja without any table talk, just by quietly selecting cards, which is useful while learning the game, but is really missing the point. The richness of play emerges through unscripted sharing of information and searching for the strands of truth that run through the intricate web of lies.

A player may look at your card and then say they’re on the same team… but are they? A player may choose to announce their house to the table… this could be a move designed to provoke enemy attack, drawing attention away from higher ranked members of the house or it could be an outright lie. As with many social deduction games, you can’t rely on any information shared verbally. Suspicions are raised as soon as a single word is uttered and layers of deception erode trust. Lie too much and you may burn your bridges.

Players in the winning house each take an Honour token – worth two to four points – at random. There’s already so much hidden information in the game, which is a race to 10 points, that making the points secret as well is rather annoying. But – and it’s a big but – the game is fast which reduces the sting significantly. If you lose a game, just play another one.  If you die in a round, the round will soon be over and you’ll pop back up to play again. Even when dead you can take part in discussions and influence decisions that other players make, so you don’t feel excluded.

The unusual papercut silhouette style artwork is absolutely stunning and helps to draw players into the ninja world. The gameplay is slick and simple making it easy to onboard new players; but there’s also surprising strategic depth which will keep this little gem coming to the table.

TRY THIS IF YOU LIKED:  Coup

Coup is tighter but this game still has the same delicious interplay between character cards. 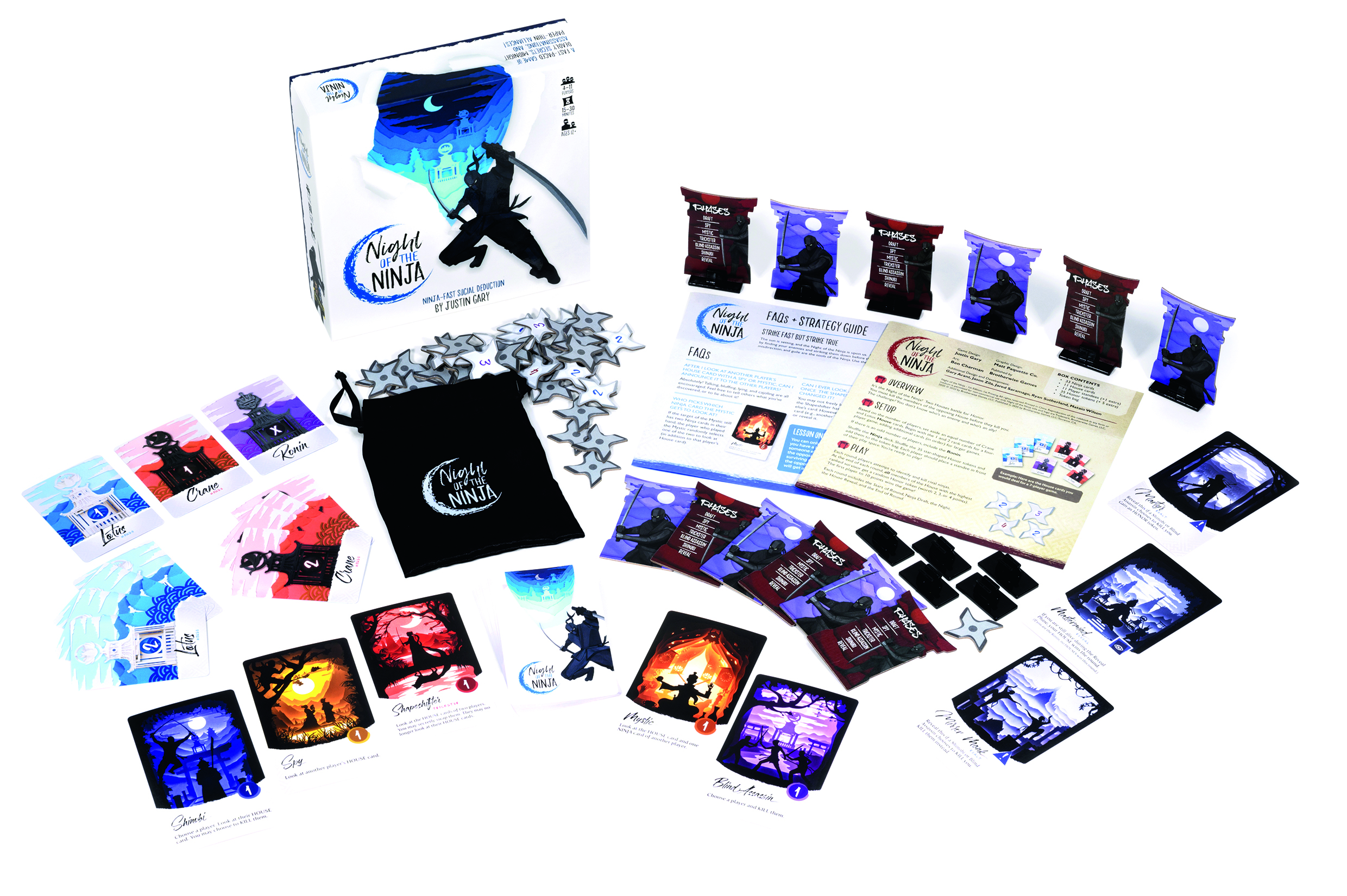