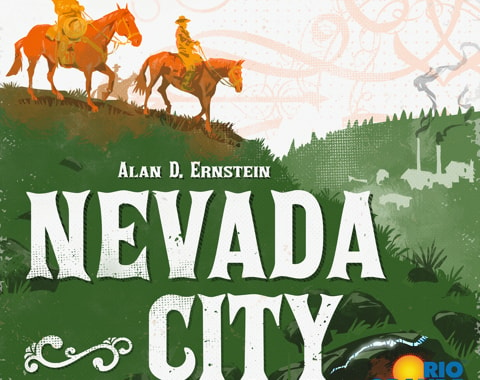 Lay the foundations of the unforgiving west

There’s plenty of games drawing on the oft romanticised elements of America’s Old West: gunfights, train robberies, ranching, it’s all been done. But what of the whole experience? 2018 saw Western Legends released to great acclaim, offering an adventure-filled sandbox experience – but for the more euro-inclined audience, options are slim. Thankfully, Rio Grande have stepped in to fill those spurred boots in the form of Nevada City, a sprawling worker placement game chronicling the early years of this frontier town.

Whilst the framework is familiar; place a worker – gain resources, Nevada City exudes its setting through a dynamic sense of interconnectedness between its actions. Points will largely be gained through the construction of buildings. In turn, these become additional action spots, with the owner requiring payment whenever another player uses them. This mechanic is hardly new, but in the context of this blossoming town – there’s a satisfying illusion of a living economy.

Adding further touches of realism are the founding families players will be managing. Each family is composed of four worker cards, each detailing their particular strengths and number of actions. Players will need to exhaust all of a character’s actions before choosing another next turn, requiring some thought as to who will best suited to carrying out particular strategies, and importantly, when they should be used.

The decision to not make all workers equal extends to the hired help too, who can be picked up from the board’s Hotel space for a cost. Choosing whether to spend that little bit extra for a worker with plentiful actions or a cheaper one replete with building discounts or farming bonuses is an interesting conundrum, that feels genuinely unique to Nevada City’s take on worker placement. As a little bit of added theme, the advanced game also posits all un-hired workers as troublemakers, needing to be dealt with through a separate gunslinging deck.

Putting a nice spin on Agricola’s family growth mechanic, are Nevada City’s rules for marriage. For the price of two spirits tokens and a couple of resources (basically party booze and a dowry of cows) players can marry one of their temporary hired workers, permanently increasing the number of actions available each year. Ignoring the rulebook’s odd insistence that this is a strictly heteronormative arrangement, the rules for marriage serve as another example of Ernstein fusing theme and mechanics to create a dynamic and lived-in setting – no mean feat for a Euro-style game.

These many thoughtful touches undoubtably make Nevada City stand out in a crowded market, but it’s not without its faults. Games are arguably a tad too long, and getting your first play-through up and running can be a bit of a chore thanks to its many pieces and a flawed rulebook. Typos and contradictions do pop up occasionally, leading to a need to consult forums and the game’s official errata. As for the game itself, players will often find themselves lacking direction and relying on tactical responses to punishing random events, over long-term strategies.

That said, Nevada City is a grand and immersive simulacrum of the old west, propped up by a mostly solid set of rules. With its mix of the good, the bad, and the ugly, the game won’t be for everyone, but for fans of the theme, it’s a joy.

Nevada City brings its unassuming looks to life with an elaborately woven mashup of smart mechanics and unexpectedly rich theme. Whilst it never feels groundbreaking, its gameplay is certainly engrossing enough to warrant attention.

TRY THIS IF YOU LIKED AGRICOLA

Lacking the longtime classic’s depth of strategy, Nevada City nonetheless conjures a similar feeling with a dash of exciting randomness and a strong theme.