Congratulations, we can add Neuroshima Hex to the list of fictionalised apocalypses with outdated start points. We can enjoy this lovely anniversary edition of this long standing hex-based wargame for two or more players, instead of getting crushed under the 2020 mechanical uprising.

Each game starts with players placing their base hexagon on the board. Whoever can pile on enough damage to destroy their opponent’s base first, wins. Players take turns drawing up to three tiles, then choosing to either play them, discard them or hold them for a later turn. Each army in Neuroshima Hex is comprised of exactly 34 hexes and one base, each with their own unique pool of units, actions and modules.

Units are the cornerstone to your play, each one printed with universal symbols to denote its abilities, from soldiers able to fire rifle shots across the board, to hulking brutes who cave in skulls with melee damage.

Units often only have one health and can only attack from certain sides of their hexagon, making it important to consider when and where you place each one for maximum impact. Units also have a number representing their initiative; when fighting breaks out (either due to a battle action being played or the game board being full) all units of the same initiative act simultaneously, starting from the highest value and working down to zero. This means that a quicker unit might be able to dispatch an adjacent foe before their get a chance to strike, with battles seeing huge swathes of units getting swept off the board whilst bases take a pummelling as well.

Actions don’t just start fights, but can also let you manoeuvre units to better positions, or snipe out troublesome enemy units without plunging the whole board into fighting. The third hex type, modules, are often weak on their own but can supercharge attached units, offering more attacks, more damage and even shielding units from harm.

The back and forth nature of the game sees you acting and reacting to not only what’s happened, but what you’ve drawn now and what foes await you in the future. This set contains the four starter factions, each with its own fighting style. The Moloch’s represent humanity’s greatest threat, as the machines take advantage of highly specialised unique units to overpower their foes. The Borgo are comprised of supermutants, who fight faster and harder than humans in the hope that sheer force can overcome their foes. The Outpost are humanity’s last standing army, with plenty of mobility options and ranged units to pepper foes to pieces from a distance, whilst the Hegemony gangs prefer to take the fight to the enemy’s face, with modules that magnify their melee potential.

This edition also swaps out the solo puzzle mode from past sets for a two-player campaign, with each of its five missions offering twists on the standard gameplay that will happily entertain for a few evenings or a rainy weekend.

Everything about this edition’s production feels luxurious, from the deep-set game board that lets you slot in hexes to the resin life counters printed in your faction symbols that track along the board, even the fact that this set contains space and components for every faction ever released for the game, this box is a celebration for the fans and a great starting point for newcomers alike.

In short, games are fast on action and consequence, an easy recommend for fans of wargames provided that they don’t mind a bit of grim future in theme with gameplay that slightly favours lucky draws over pure strategy. 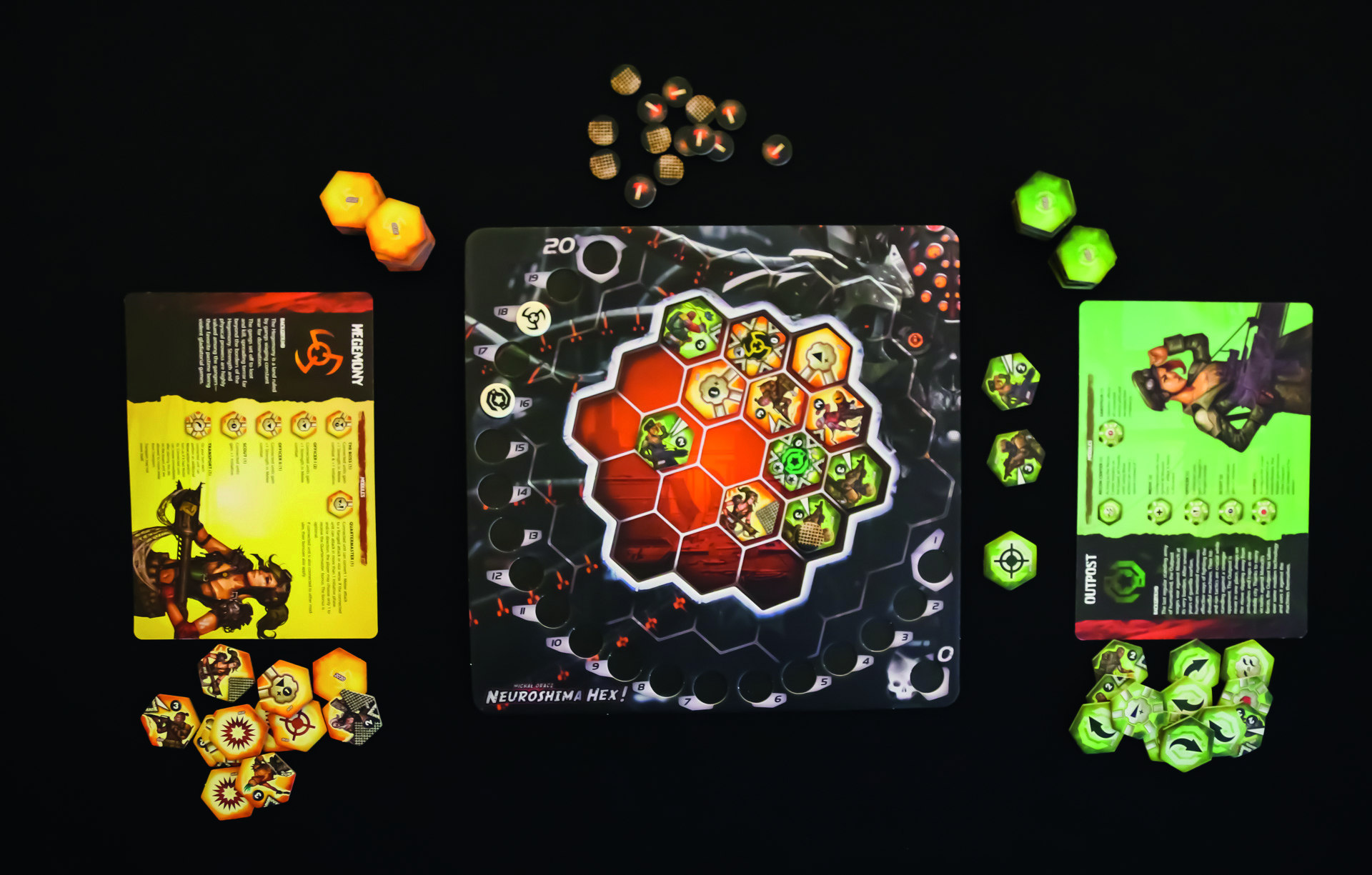 A must have for fans and a great stepping point for beginners, this war game offers strategic position with a dash of luck for a fun-filled end of the world.

TRY THIS IF YOU LIKED Hive

Both games have wonderful hexagonal tiles and a deep layer of strategic play, if you like a little chaos over perfect bug management, Neuroshima Hex is the game for you.