Nessos is a game based on the Greek myth where the hero captures various classical monsters and imprisons them in clay jars to offer to the gods, but slips up and gets ferried to the Underworld as punishment. This myth, with others by the writer Spurios of Themes, was recently discovered by archaeologists on the island of Iello wrapped around an abstract bluffing card game.

If you come to Nessos hoping for classical derring-do and sandal-based escapades you’re in for disappointment. This is old-school bluffing and lying, a game of tricksters and trust. If the designers had gone for a Norse theme instead then the subheading on the review would have been ‘Are you feeling Loki, punk?’ because that’s the gist of it: how well can you lie to someone’s face?

Each player gets a hand of cards, mostly numbered 1-10 with monsters from satyrs to medusae, and most likely a few green Charon cards too, with no number. When the first-player marker (a wooden amphora) is in front of you, you pass one of your cards face-down to the player on your left. If it’s a monster, you must say its number. If it’s Charon, you must lie, giving a false number.

The receiving player has three options. They may tell you that you’re a transparent charlatan, forcing you to take the card back and place it face-up in front of yourself. Or they may accept it, placing it face-up in front of themselves, or – and this is where it gets interesting – without looking at the card they can add another one from their hand and pass it on to the next player, speaking a number which may be true or a lie depending on the card they’ve added. This third player can then refuse, accept or add, as before; and the fourth player can only accept or refuse.

Charon cards are the risky ones. Get three of them face-up in front of you and you’re out – and it’s possible to get three in a single hand, if you’re at the end of the chain and can’t tell you’re being sold a three-headed pup. So there’s a big element of calculating risk and pushing your luck, as well as spotting truth from myth.

It’s a great deal of fun, but it has weak spots. Play is always to the left, so you’re always going to be giving a card to the same player, which is a problem if you’re sat to the right of someone who can read you like a book. The rules for fewer players require you to take out some cards, which feels like a fudge and spoils the game when someone offers you a 6, having forgotten they’re all in the box. And there are unnecessarily fiddly details in the rules.

But it zips along with energy and pleasant tension, somewhere between Poker Dice and  Sheriff of Nottingham writ smaller and faster. There isn’t much in the box but it hits that sweet spot where novices will have fun and more experienced gamers will crunch the numbers and plot the tactics, and still most likely lose to someone who’s spotted that funny sniff they do when they lie.

‘Greek deduction and bluff’ it says on the cover. They should have used the poet Virgil’s one-line summary of the Trojan war, ‘Beware of Greeks bearing gifts’ because it sums up the game perfectly, but if someone gives you a copy then it’s one gift you shouldn’t turn down. ∗

There are more intricate games of bluff and chance out there, but Nessos has a stripped-down simplicity and speed. A few fiddly details spoil what’s otherwise an elegant and very enjoyable opener.

TRY THIS IF YOU LIKED SKULL…

Nessos is not the same as the (supposed) biker game of bluff and luck, but they share a style, a dynamic, and really good-looking cards. 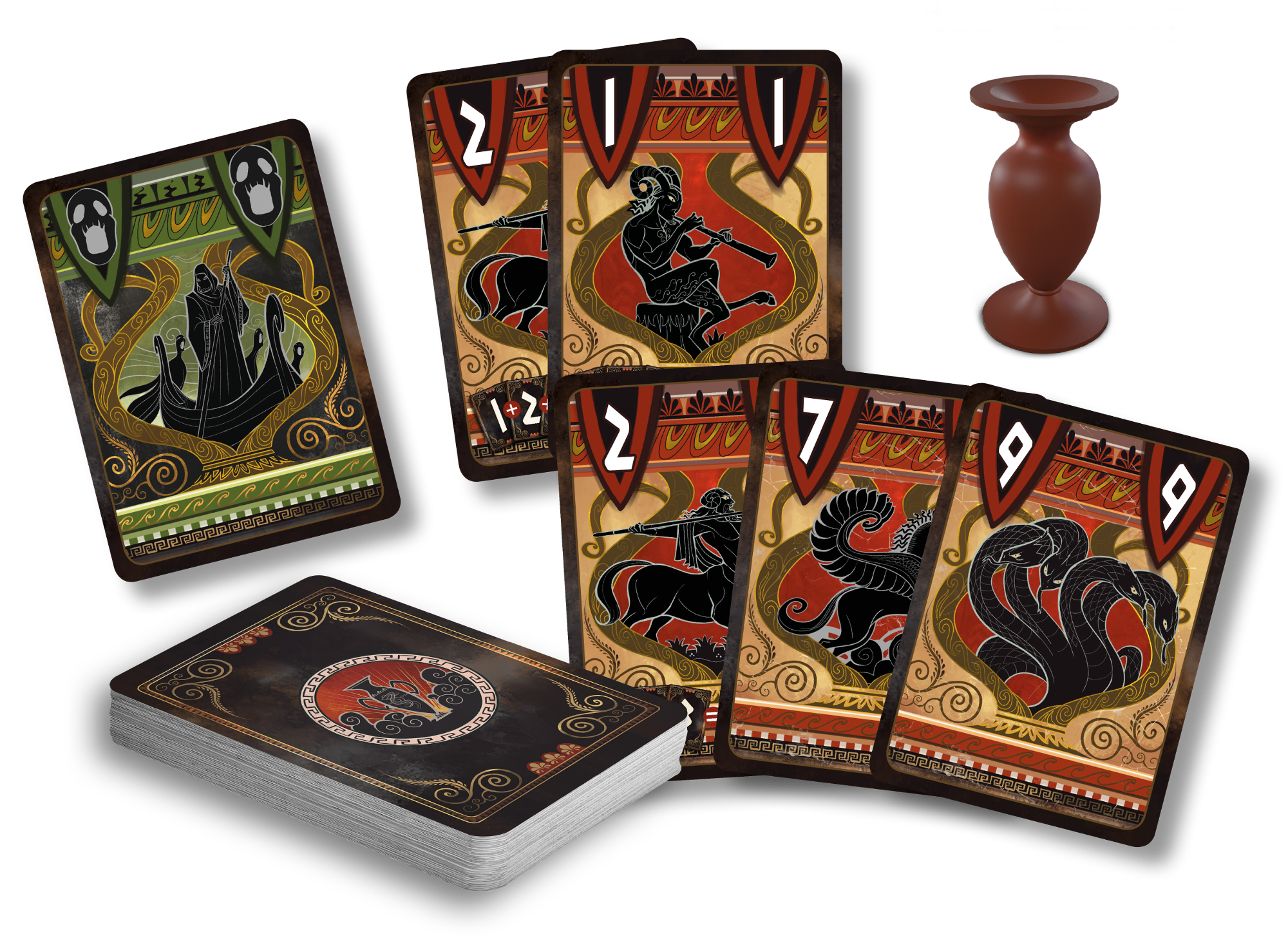