Amidst the clanking machinery of the manufactorums, the soot-streaked back-alleys of the lower hives and the stinking sewers of the city’s underbelly, something sinister is afoot. Hulking, savage cultists jibber and howl in service to fell powers as a full-scale rebellion breaks out. With typical ruthlessless, the Imperium responds with the long arm (or more aptly, fist) of the law, attempting to bringing order to the chaos through a rain of shotgun shells, bolter rounds and shock maul blows.

Thus is the setup for the latest expansion of Games Workshop’s popular skirmish spinoff of Warhammer 40,000, and they’ve spared no expense in pulling out the stoppers. For many, the box’s main draw will be the contents first and foremost, but it’s worth spending some time looking at rulebook as well. A massive 124-page tome, the book spends considerable time establishing the lore of the uprising, in particular the new faction the box introduces – the brutal Corpse Grinder Cult.

It’s with the Corpse Grinder Cults that the biggest complaint lies. Former workers from Necromunda’s corpse recycling industry, the Corpsegrinders are cannibalistic maniacs in service to the Chaos God Khorne (the lord of bloodshed and war), who’s sole aim is killing and consuming others. Though the Warhammer 40,000 universe has always defined itself by its famous ‘Grimdark’ tone, the fluff for the faction comes across as being in poor taste (no pun intended). It is not particularly pleasant to read endless accounts of victims both alive and dead being torn apart into bloody chunks, and the vivid prose often pushes descriptions to pornographic excess.

It may seem arbitrary to draw a line in a setting focused on mass conflict, but the tone is a marked departure from the slightly tongue-in-cheek approach Warhammer 40,000 has taken to violence in the past, and not for the better. 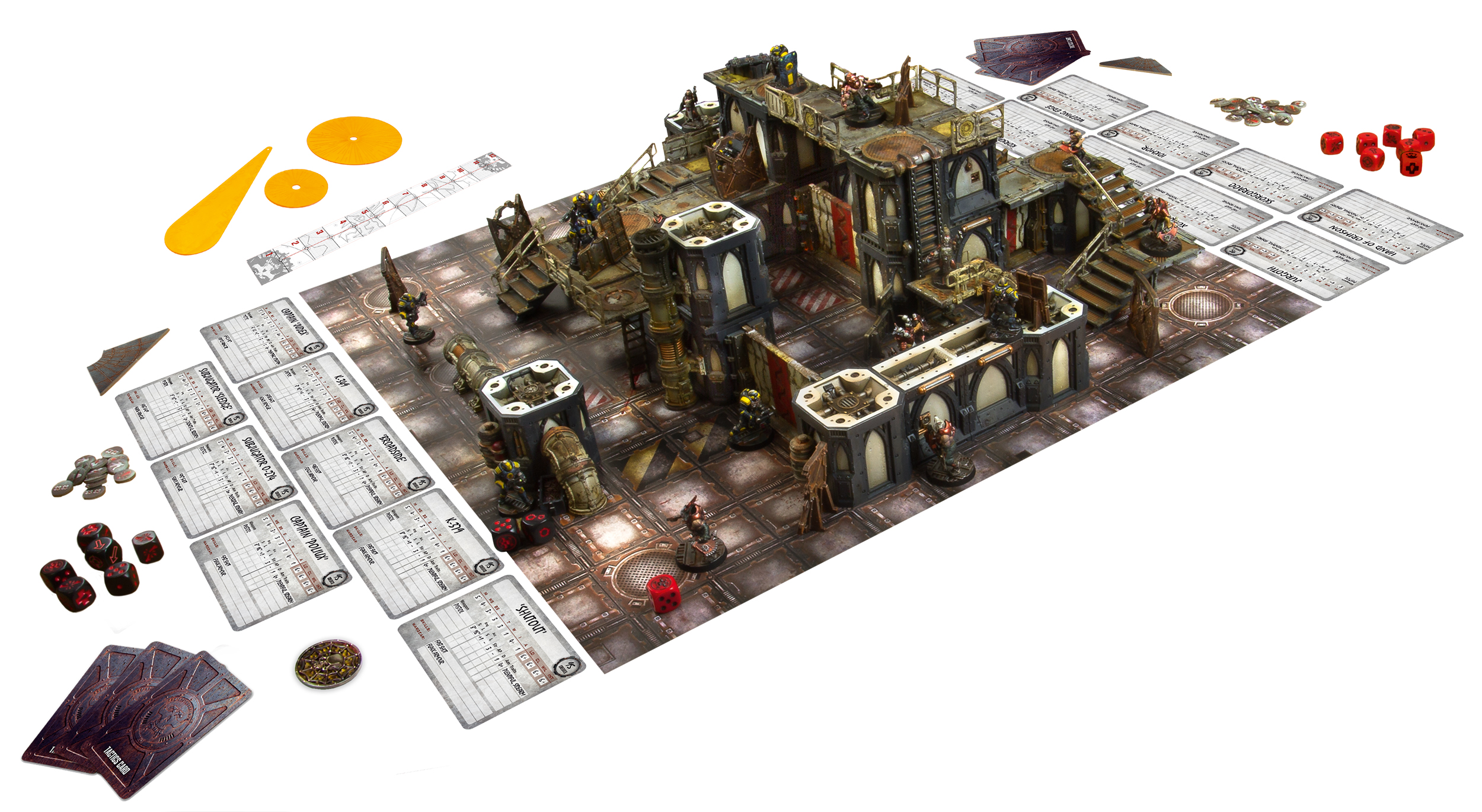 The rules themselves are broken down into several chapters, covering basic principles of play, game rules, campaign play, scenarios, faction composition lists for the Enforcers and Corpse Grinder cults and weapon and skill lists. The rules themselves remain unchanged from the base Necromunda system and the campaigns and varied scenarios offer a meaty (again, no pun intended) amount of variety, though it’s a singular shame that for a box of this size and price rules for the other Necromunda factions weren’t included as well.

Additionally, whilst the Enforcers have a large arsenal of tactical weaponry at their disposal, on occasions the Corpse Grinder cults feel comparatively limited, being focused squarely on melee only.

Finally there’s the miniatures and scenery. In contrast to their vivid descriptions, the Corpse Grinder miniatures themselves are a rather bland affair, consisting of muscled behemoths in skull masks wielding chainsaw axes, a look that by now is pretty much de rigueur for the Warhammer 40,000 setting. The Palanite Enforcers, by contrast, are an existing faction based on the old Adeptus Arbites miniatures, though they’ve swapped the barely concealed Judge Dredd knockoff look of their predecessors for a more ‘tacti-cool’ look with bulky ablative amour, grenades and weapon rails. Both sets of miniatures are up to the usual flawless Games Workshop standard, though the big hook is the vast amount of plastic modular scenery the game comes with. It’s a truly massive amount, though there are times when you can’t help but wonder whether cardboard might have been a more feasible option. Then again, from a certain cynical perspective, it seems that both Games Workshop and its core customer base have come to a tacit agreement that large amounts of plastic terrain are a best seller, and the core attraction of boxes like these.

Necromunda: Dark Uprising is one of those games most clearly aimed at existing Games Workshop fans, and it should always be borne in mind that there exists non-Games Workshops games of a comparable physical size and price that offer far more depth than what’s offered here. If you’re onboard with Games Workshop and Necromunda this’ll likely be a blood-soaked wonder of plastic, though if you’re new to the world of Warhammer it may be worth looking at other, cheaper starter sets to begin with.

A Games Workshop signature style plastic extravaganza, Dark Uprising is a super weighty expansion to Necromunda that’ll appeal to fans of the setting, but whose price may prove too rich a meal to the unconverted.

TRY THIS IF YOU LIKED…WAR CRY

Another weighty Games Workshop box set, Warcry contains a comparable amount of miniatures and terrain to Dark Uprising, and oﬀers a fast, tactical and satisfying fantasy conﬂict experience to boot.

- Frame of Necromunda barricades and objectives