There’s something strange, in the Carnival

Come one! Come all! To the mystical magical delights of Mysterium Park, the carnival that came to town with a spooky spectre attached. Thankfully, they pitched up in the right place, because you’re able to travel to Mysterium Park as a psychic to find out what really happened to the disgruntled deceased, in this standalone Mysterium game.

It’s almost impossible not to immediately compare Mysterium Park to Mysterium. Whilst the ominous clock tower that spells your failure after thirteen hours (though, gratefully there are no pumpkins from carriages at the twelfth) has gone, as has the longer game board and huge box, the game is essentially a reiteration of mechanics that work really well. It adds in some refinement that – though wasn’t needed to enjoy the game – is surprisingly welcome.

One player will assume the role of the ghost, offering hints through cloudy ‘visions’. These visions are in fact abstract artwork that they hand other players to consider. Ideally, these will point the other players directly to the location they need through clever deduction (though of course, in reality, what you notice in this artwork will frequently differ from the intention of the ghost player), and so psychics will cooperatively determine which of the options is correct, for mutual glory (or failure), and some enjoyable hilarity at the potential far-fetched deductions. 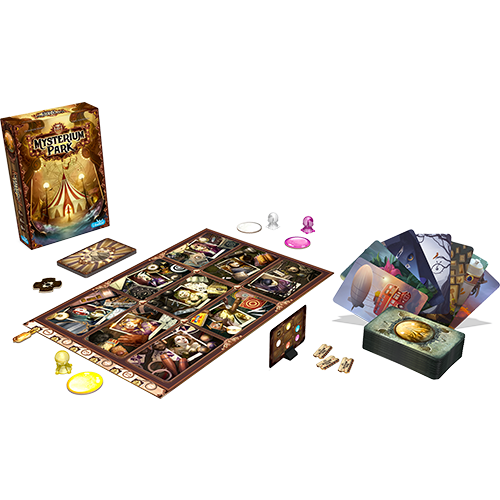 This of course, is interchangeable with the description of Mysterium, so what really has changed in this new box?

Firstly, instead of progressing through a track-like home as you would in the Mysterium Manor over thirteen rounds, now, you’ll be trying to guess the position on a board over six rounds. You’ll play only to find the character and location. The cards containing the guesses are now laid out on a three by three grid on the game board, and the ghost picks a card that mimics the grid with the players’ colours prefilled, which remains hidden from the investigators. This tells the ghost what each of the players will be searching for, rather than requiring individual cards for each one. It’s neater and works really well. There are little extra additions, like the use of a witness card, and the final round uses one row of the collected cards based on roman numerals all of which fit fine.

The vision cards are also replaced now, this time with a little added modernity, as it is now the 1950’s instead of the 1920’s. The artwork was always a really praiseworthy part of Mysterium, and it continues to excel here. How do you make a black cat in a night time scene in front of a house in the middle of a field, seen through a cat head shaped window tell your players to pick a ‘study’ on a ‘boat’? Answer: you either correctly anticipate your fellow players thought process, or hope that with a one in nine chance of guessing correctly, they somehow find their own logic and get it right regardless.

Overall, the changes aren’t huge, so if you liked Mysterium before, you’ll pick up Mysterium Park quickly, and it feels like you’re getting more of a good thing. However, those changes make it feel like a pleasantly condensed version of Mysterium. A smaller box doesn’t mean less gameplay, but a tidier one. As Mysterium sits in a sweet spot – a tiny bit heavier than a gateway game, but not heavy enough to pull itself out of the party genre – and as does its new arrival, Mysterium Park is a really solid recommendation for both new and veteran players.

Forget Ghostbusters, you’ve got this one covered. Tidier mechanics make for an all-round great rework of a classic.

Try this If you liked: Codenames...

These sort of guessing games sit within their own category, but this mixture of Codenames, Cluedo, Dixit, and the original Mysterium means you’ll love Mysterium Park