Go…by the grace of gods

War would be a lot less messy if we settled our quarrels by ascending our most accomplished warriors and tacticians to the magical fields of the gods for a bloodless battle of wits. But alas, war never changes. Thankfully though, Timewarp Labs have harnessed this lofty idea for their successfully Kickstarted area control game Mitropia.

Off the bat, I can confidently shower the designers with kudos for not plaguing their Kickstarter with miniatures, as the real beauty of Mitropia lies in its simplicity. Indeed, its grand thematic backdrop belies a refreshingly simple design heavily inspired by the classic game of Go.

Much like Go, players are aiming to claim the most territory by surrounding areas with their playing pieces whilst capturing those of their opponents. Mitropia’s aim though is to repackage this ancient gameplay for a contemporary audience, upping the player count, supplanting grids for hexes, and layering on some modern mechanics.

Players will be choosing from one of five tribes before placing their oversized chieftain token upon the randomised hex-based map. From here turns will flick back and forth as more and more wooden warrior discs populate the board until either a chieftain is captured or there are no more valid moves. 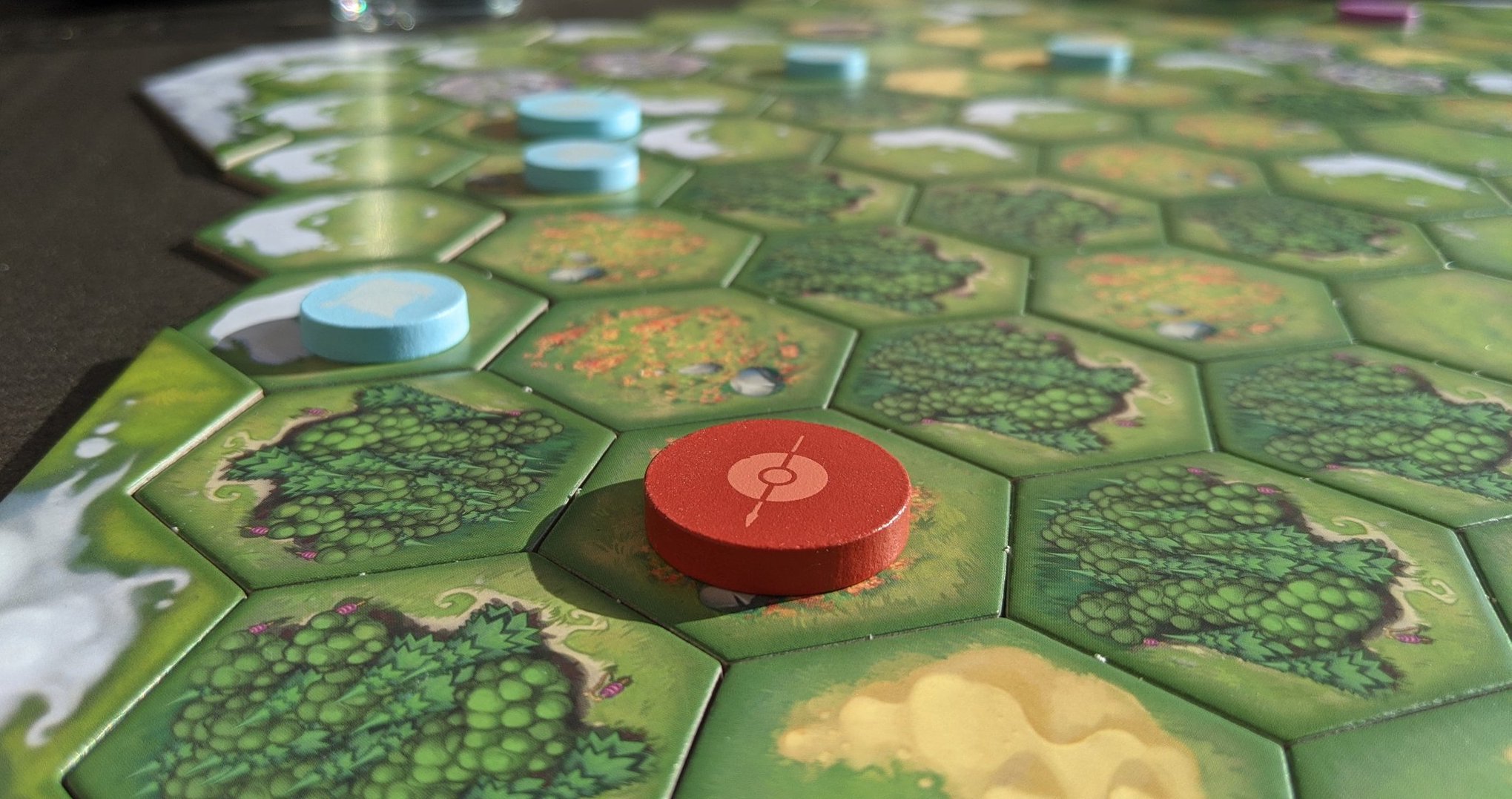 One of the first mechanical innovations is in how warriors enter the board. Rather than taking Go’s liberating if slightly overwhelming approach of allowing placement anywhere, Mitropia chooses to employ the use of Pattern Cards. Not dissimilar to Onitama, these pattern cards will dictate where each new warrior can be placed. The central, grey icons represent any of your own fielded warriors, with the surrounding blue icons being potential spots for your next. There’s also a number of special action cards – ideal for springing warriors in unexpected places – and occasionally allowing the deployment of multiple discs.

There are no universal rules for movement upon the board – as warriors will typically remain in place unless captured – but, somewhat confusingly, the rulebook repeatedly refers to the effects of each card as a ‘move’ or ‘movement’. There’s also an editorial mix up in the special powers of a couple of tribes and a failure to mention that one tribe’s particular power is incompatible with two player games, but elsewhere the rules are clear and well visually demonstrated.

The first forays into Mitropia are enveloped with tension and excitement as players fervently scan the board state, consider their cards as they gradually seep warriors toward rival tribes, establish temporary alliances to capture a common enemy, and eye-up impassable terrain as an inanimate ally for encircling opponents. Games are surprisingly quick and the scoring refreshingly simple too. Furthermore, the core, card-based deployment mechanics are great and figuring out optimal placements is consistently rewarding, but unfortunately all of this starts to diminish as the board fills up.

The game isn’t broken per se – there’s still a decent degree of tactical fun to be had here – it just simmers down its strategic depth sooner than you’d expect. It may not be perfect or wholly original, but Mitropia nonetheless presents an interesting take on area control which abstract fans should appreciate.

Mitropia is smart and oh so mechanically smooth but ultimately falters in the shadows of ancient, strategy classics.

TRY THIS IF YOU LIKED: GO

An undoubtedly quicker alternative to this ancient game, with enough modern touches to make it approachable for contemporary abstract fans.