It’s not often you can call a game fully family friendly, and in such a way it might appeal to the niche side of board gaming, but Mickey and Friends: Food Fight does it rather nicely. It’s a game that benefits significantly from its theme – a mixture of nostalgia for Mickey Mouse, and the associated professional art style that comes with it – that elevates it into a surprisingly fun game.

Simply, you select a tray based on your character, where you hold food. You’ll then roll dice, which will allow you to fling (or place, depending on how adult you’re feeling), the relevant food pieces in the quantity and direction confirmed on the dice themselves. You’re aiming to have no food left on your plate, by passing it to your fellow players, in order to win. There’s no tactics to be had, it’s simply about how the dice roll, but the satisfaction of clearing your plate first can’t be ignored.

The game is themed around the ‘No Service’ Mickey Mouse short – which descends into a food fight, but is actually around Mickey and Donald failing to meet the dress code (by being fully dressed, as neither are), and arguing amongst themselves in the hope at least one of them can collect enough from the others to get food. Whilst that element doesn’t come up, instead the game utilises the artwork of it, a modern yet retro style that’s been controversial amongst Disney fans, but is inarguably bright, clean, and expressive. The subsequent components are of decent enough quality for a game of its price, holding its own without overly standing out. 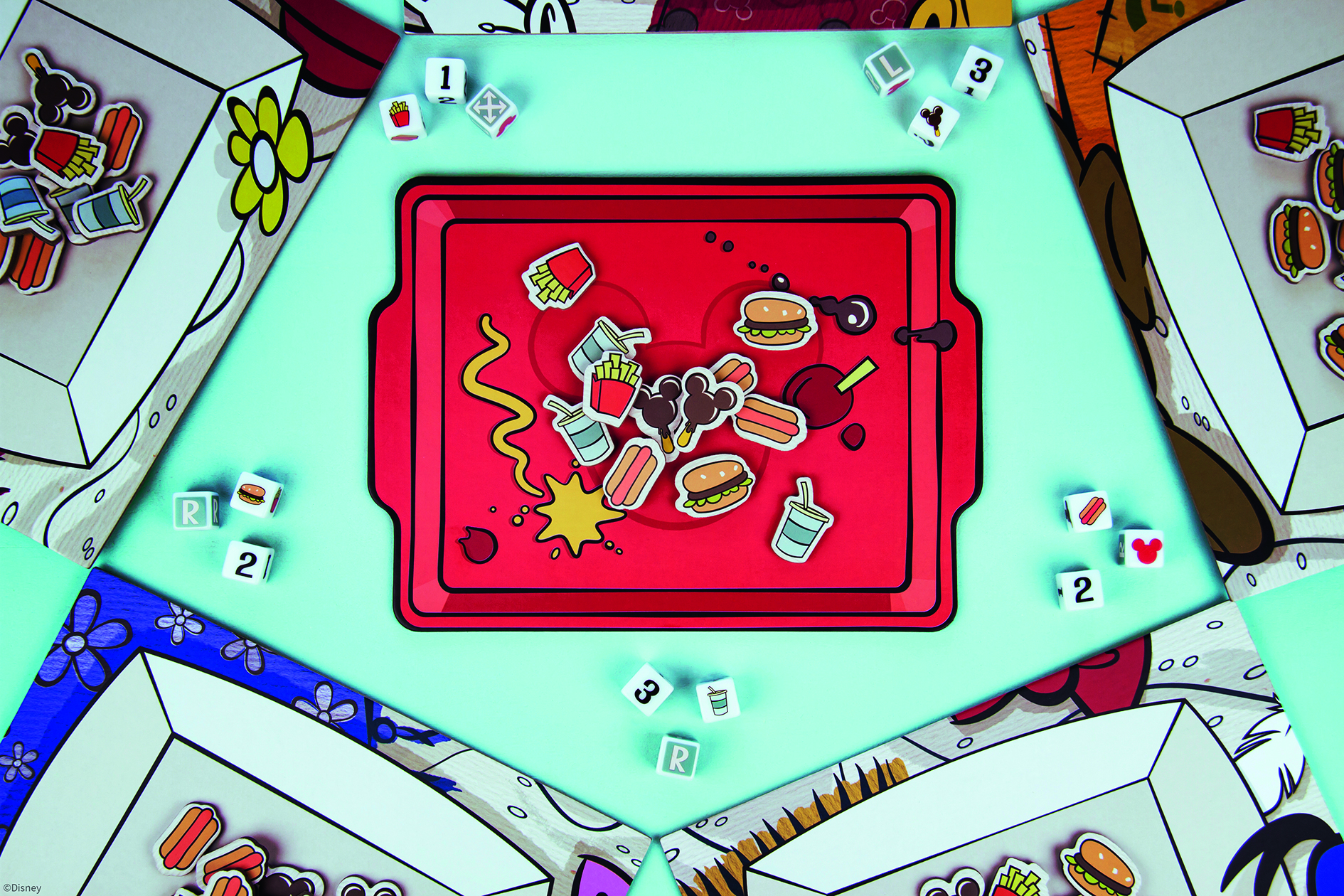 It’s nice to have a game that can reliably be played with younger family members with little to no adjustment (ours was merely a left and right sticky note to nudge which side was which when the L or R came up on the dice). Perhaps the only other Disney themed game that regularly makes it to the table is Villainous, but that has a recommended age rating of 10+. Others available fall straight into the children’s game market, as opposed to the hobbyist.

There’s plenty of opportunities to play the game differently, as listed in the rulebook. Once you’ve played the standard version, you might prefer their pot-luck version, where a certain combination of dice sees you passing your tray on to your fellow players, leaving you with theirs – whilst trying to still get rid of all food on your tray. Alternatively, you can play the collecting version, where you poach food from others trays to complete the set, using the same rules in reverse. These were an enjoyable change, and a welcome opportunity for something a little different once we’d played the standard rules a few times.

Whilst these alone are certainly sufficient to recommend it for families to play together, given a low barrier to entry, good fun to be had, and general competitiveness, the game really steps up when you add a timer into the mix. It’s not a rulebook recommendation, but became our homebrew rule quite quickly. The game plays in around fifteen minutes most of the time, but should we set a ten-minute timer, (or less if feeling particularly mean), the dice rolling becomes a lot more frantic, the movements faster, and the frenetic energy of a food fight much closer to the theme. It has a little more of that urgency you get from games like Escape: The Curse of the Temple, as well as the delight of repeatedly throwing dice within a time limit, all whilst exaggerating the fun parts of Food Fight.

With this, the game came down from the shelf more often than needed for the review, and indeed its short playtime meant that it could be used as a quick palette cleanser between other games – or a great distraction for disgruntled little ones.

Oh boy, a fun family game getting everyone involved (and learning their left and right!).

Frantic dice rolling, but without the food for thought.