A trading game that goes a bit overboard

Sometimes a game can just be a bit too much. So much that even the most enthusiastic tabletop hobbyist would take one look at it and start to feel tired. For all its ambition to capture asymmetric variety in a single box, and for all its impressive production value (featuring numerous 3D elements and some fantastic artwork from The Mico), Merchant’s Cove is one of those games. A table-hogger. A shelf-creaker. A rules monster.

Where to begin? Well, in all honesty, it is not essentially that complex a game. We are not talking Vital Lacerda levels of mind-tenderising crunch. The hub of the action is a big ol’ board which impressively depicts the cove of the title. Here, in the role of fantasy merchants, players will fill lovely 3D boats up with meeple adventurers (warriors, wizards, nobles, rogues), and bring them in to one of three different piers to sell them appropriate, colour-matched wares. Players will also recruit townsfolk to work in their stores, curry favour with the different guilds, and manage their time-costly turns via a clock-like track. It is, as the title suggests, a very Euro economics game of creating supply and meeting ever-shifting demand.

But there’s more. Like Root, each player is effectively given their own, individual mini-game to play, with its own rulebook, board, components and product-creating mechanisms. The Alchemist tinkers around with marbles in a Potion Explosion-y style. The Blacksmith forges weapons and armour using a dice-placement system. The Captain sends ships around a map to fish and find treasure, using a spinner to determine their moves. And the Chronomancer strategically places and moves tiles to create a timestream of portals, through which he and his halfling assistant can grab artefacts. 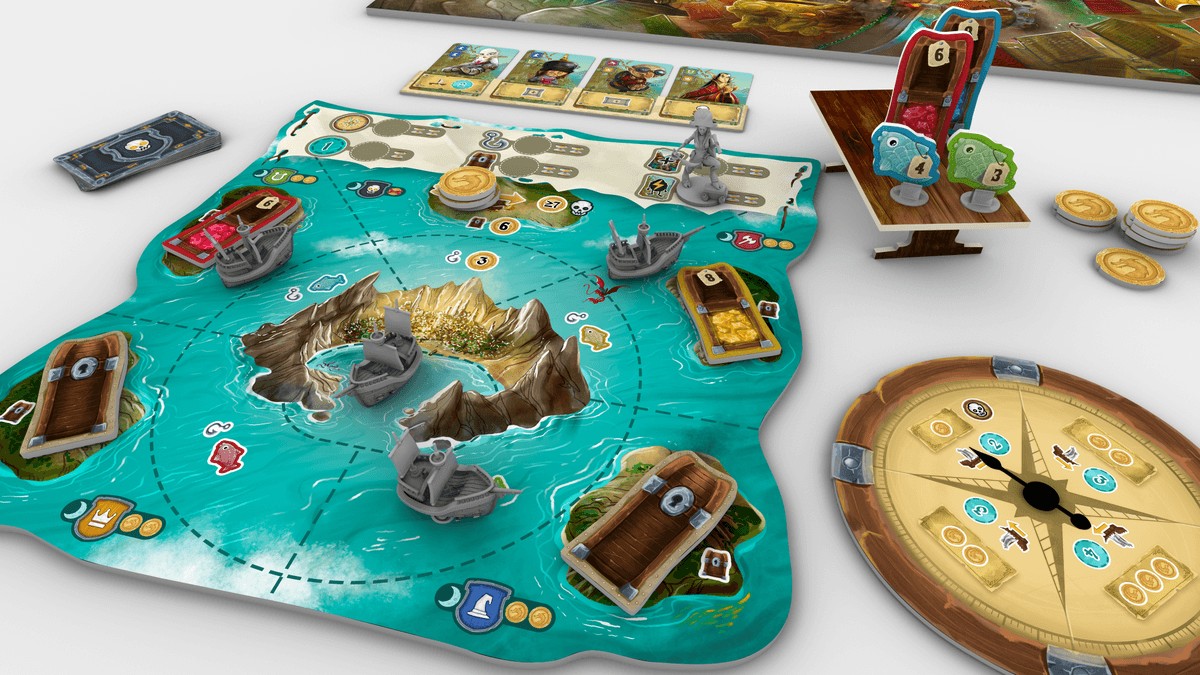 If your table is big enough to fit all these elements (five boards plus trimmings), it is pretty amazing to behold. But unlike Root – admittedly a tough act for any asymmetrical title to follow – it doesn’t all snap together as smoothly as you’d hope. The balance feels a bit off. For example, with that spinny thing, The Captain is far more dependent upon luck than the other three characters, and in our plays always lost by quite a wide margin. Meanwhile, the Chronomancer enjoys an action-cost reducing flexibility the other characters will crave, meaning they won more times than anyone else.

Furthermore, where Root keeps your attention focused on its central board, where all the real action happens, Merchants Cove tugs you away to your own patch on the periphery, doing your own thing in your mechanistically distinct silo. The central, shared board, feels like a secondary consideration which offers a relatively limited amount of interaction.

There is a lot to like: the chance to replay with totally different characters, the quality of the components, the lively thematic backdrop. But with all the required setting up/breaking down and multiple rule-books to consume, you have to seriously ask yourself whether in such a crowded market it’s really, truly, worth all the effort.

It’s big and impressive, with a lot going on. But it’s tough to teach and tricky to learn, while its asymmetrical elements detract from the interaction and feel in need of fine-honing.

TRY THIS IF YOU LIKED ROOT…

Another game in which each player has their own mini-game to master, but Root does it so much more elegantly.