Meow: The Cult of Cat Review 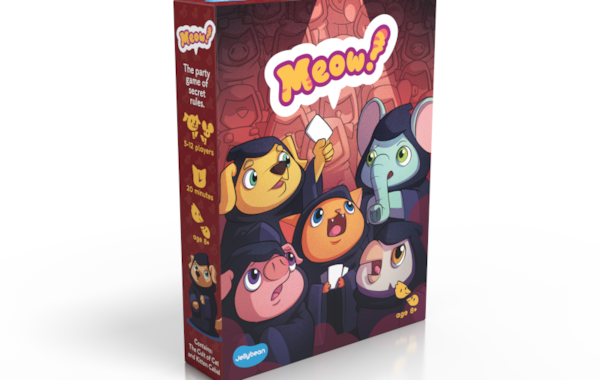 A solid game for all ages

Meow: The Cult of Cat is loosely based on the game Mao. Within it, you’re trying to enter into the Cult of Cat, and this game marks the final test to gain access. This premise doesn’t come up a whole lot, but it’s nice to have a story at least, if a little flawed in the number of other animals that make an appearance on the cards.

Regardless, each player will receive two cards with rules on. On your turn, you’ll look to follow those rules, and then any of those held by the other players. You’ll know the players rules from either watching the actions they take on their turn, or from receiving and remembering their hand, as at the end of the turn, cards are passed on. If you can complete a full and correct ruleset, you’ll automatically win the game.

At its simplest, it’s a memory test with silly actions. However, it’s been done particularly nicely. The art is bright and friendly, and matches the feeling of the game, and there’s several different characters offering you several different options. The cards are of a high quality that suggests they’ll last the test of time, and as you only use a few cards in each hand, your games will play differently each time.

In addition, there are two decks included, of different difficulties. If you’re playing with younger family, stick to the blue for a more straightforward game, or the red (or a merger of red and blue) for a more difficult play through. Whilst the game shines for the family audience, and is perhaps aimed at the younger players, it’s still a solid game for all ages.