Meadow is a tableau building game of habitat creation and careful planning of sustainability from designer Klemes Kalicki and nature artist Karolina Kijak. It feels like a game that might not have existed without games like Wingspan becoming as well regarded as they have. This certainly seems true on the sheer amount of art in the game, all lovingly created by Kijak. And while Wingspan might have the bird market cornered, and games like Oceans and Evolution have their own variety, Meadow feels somewhat unique in its attempt to present the rural world where people and nature meet somewhat happily. It’s a game of idyllic settings that not only says suggests that animals and plants are cool and interesting, but in fact, the way people can live in harmony with them can be portrayed positively. Humanity isn’t always just ruining things.

The game plays out using a grid of cards on a board representing the various flora and fauna of the world. Players take their signposts, each marked with a number to describe how far “in” on that slot they’re going, and use that to select the card of their choice. These slots run around three sides of the grid, so there’s multiple routes to get to a single card – one in from the end row might be the same as three in from the bottom of the grid for example. But there’s only so many of these slots, and even in two player games, it becomes difficult to grab the exact cards you want with the signposts you have left in your hand. 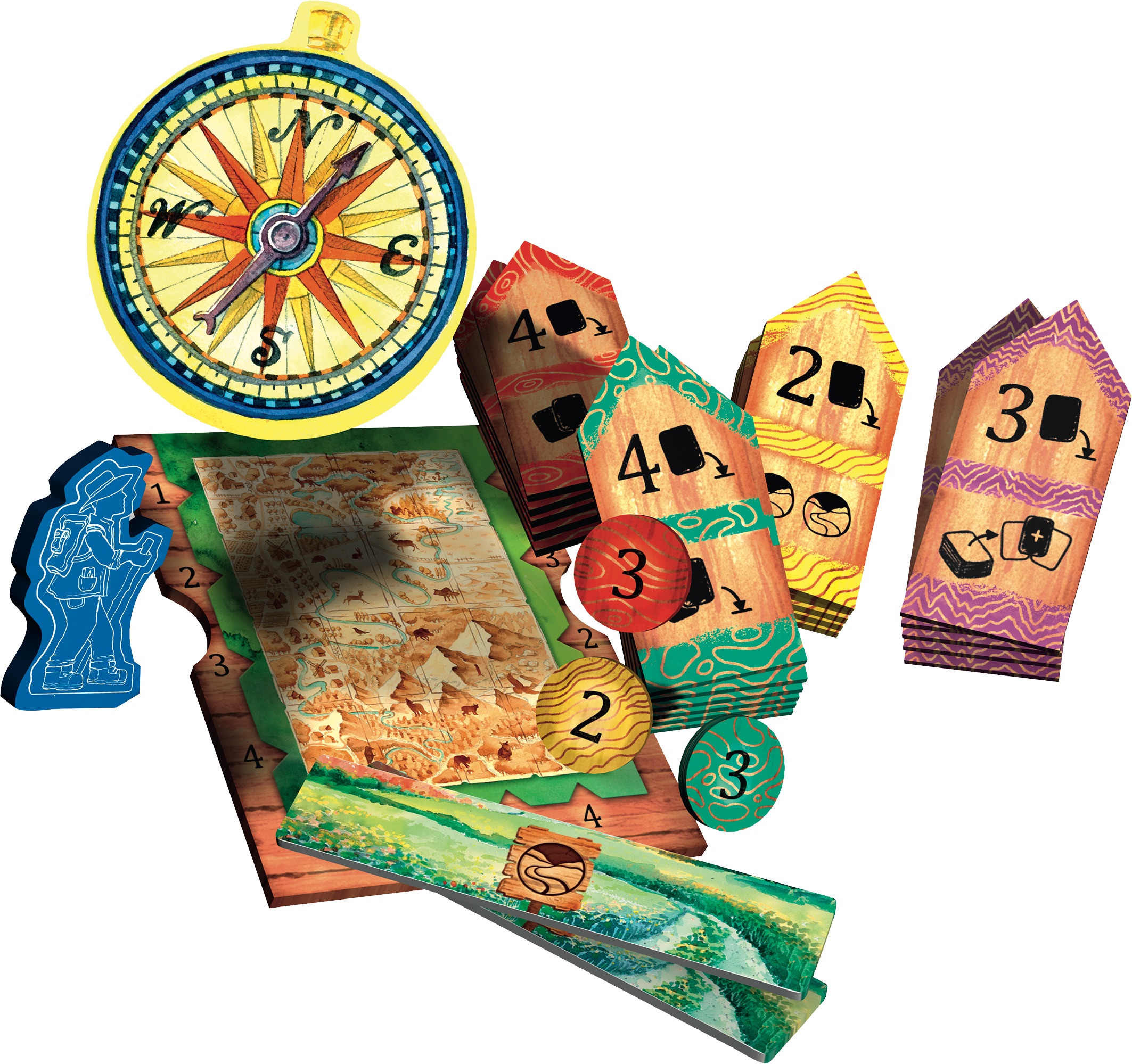 Usually you’ll be able to play one of the cards you’ve collected from your hand as part of your turn. This can be as playing a basic habitat card, the foundational blocks of your player area, or an animal, plant or human construction. To play the latter of these you need to be able to ‘pay’ for the new card by being able to see all of the requirements at the time you lay a card. While you never cover up a basic land or habitat card, you will be covering up the icons generated by other creatures and plants. This suggests a kind of food chain or dependency within the tableaus we were creating – and also asks the questions of sustainability in the mechanics “I can support this kind of bird right now, but will that block me off from others in the future?”

Ultimately, the answer here is a flat out “yes” – a completely abundant nature is impossible in Meadow. Everything is balanced on minimum viability, and once that is internalised by the players, the game becomes an easier one to grasp.

Aside from this main mechanic of picking from the grid, there is also end game scoring available on the campfire board that you can take advantage of while your player area displays various high scoring card types – predators and birds for example. Additionally, players can buy the road tiles that are required to pay for their landscape cards. These cards are designed to represent the wonder of exploring nature, and can be built on in the same way as other cards in your habitat by adding discovery cards for even more points. Taking these campfire actions is a tricky choice though, as players will be spending their signposts here too. Is it worth giving up the chance of a card from the grid, where you might get blocked, to plan for later?

In a game of creating a delicate balance that will let your habitat thrive, there are some downsides. There can be a struggle to get the perfect cards onto the board, and if you’re not up and running by the mid-game deck switch (bringing in a set of higher scoring cards for the central two columns of the grid) then you can struggle to build. It’s a game of timing in that respect, and something most players will forgive.

And once it’s all settled, and you have a small, but unique, habitat before you, there’s something to be proud of.

A wholesome, tricky game that lures you in with the beautiful artwork, and keeps you around for your engine building kicks.

PLAY IF YOU LIKED Wingspan

While Meadow doesn’t have Wingspan levels of mechanical fireworks, it does have a particular charm to it that it shares. 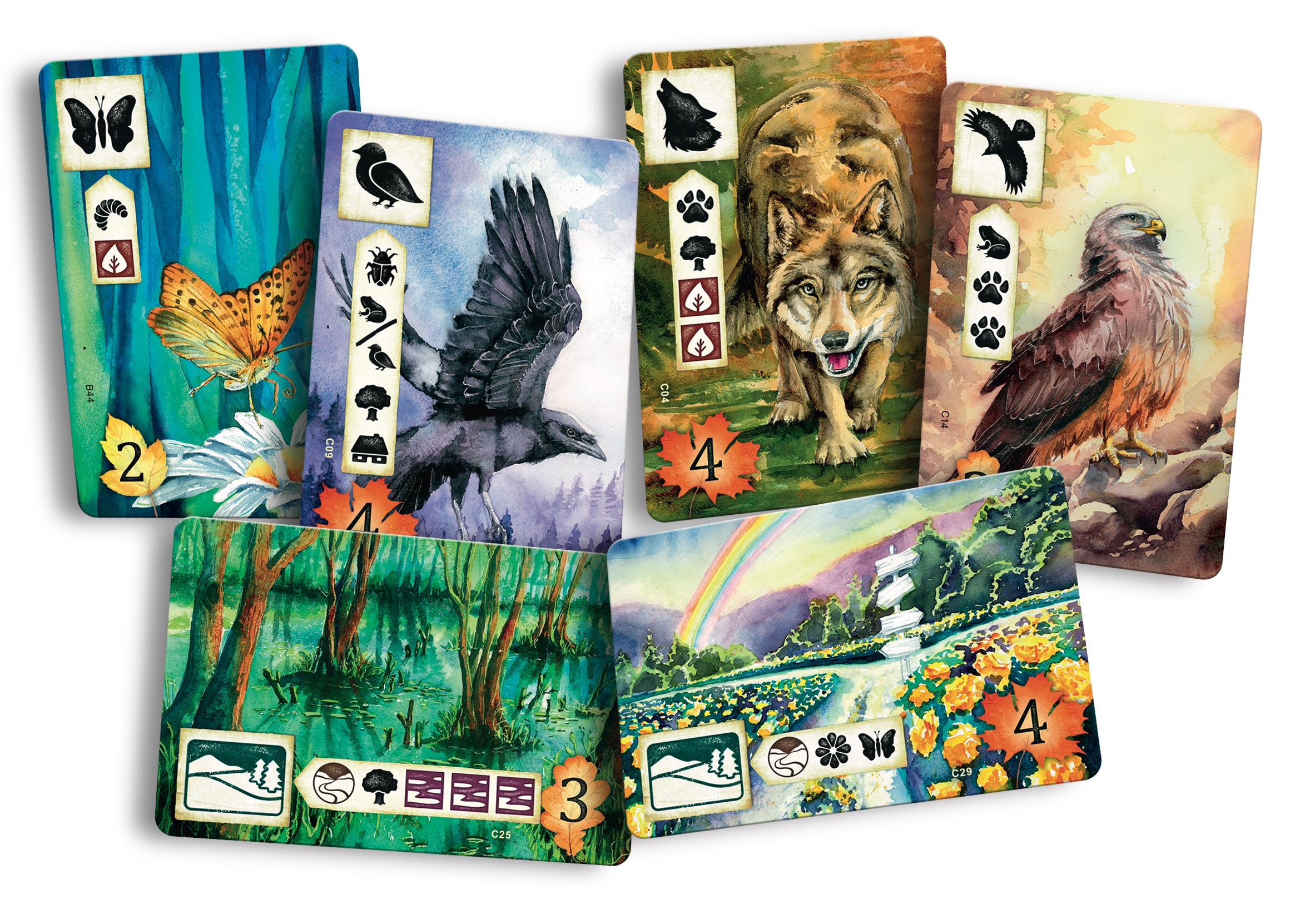 Meadow was sent to us in a beautiful way - see our Editor Chris here unbox it for a first look!

Sometimes we get very nicely wrapped packages, and then there’s sometimes this. Meadow, published by @PL_Rebel pic.twitter.com/AXlMhZTKTw