So good they gamed it twice

You may well have played the original Machi Koro, a popular gateway game that always felt like it just missed out on making the pantheon of breakthrough classics. The heart of the game is simple: you’re all building cities, made up of cards with different ‘establishments’ on, like cafes, orchards, bakeries. Roll one or two dice. If one or more cards in your city have that number at the top, you get some coins. Use those coins to buy more cards for your city. The first to build four landmarks wins.

There’s a dash of strategy in terms of what establishments you buy, and whether you roll the single die or switch to two dice and buy buildings in the 7-12 range accordingly. But largely Machi Koro is a game that welcomes young, casual and hungover players alike. It’s extraordinarily easy to teach, undemanding, and constructing your little spread of farms, mines and family restaurant feels satisfying.

Why are we talking about Machi Koro? Well, because Machi Koro 2 substantially is its predecessor, with a couple of tweaks and refinements. The rules are mostly the same, most of the art assets are the same – it’s better understood as ‘MACHI KORO, Second Edition’, rather than a true sequel in the Azul mould.

So what’s changed? Instead of choosing from the entire range of establishments when you buy, a marketplace of ten cards is created from two decks. Every time you buy one, it gets replaced with a new card from the top of the deck. Before game begins proper, each player gets 5 coins to buy starting establishments.

A third deck provides a marketplace of five monuments. Instead of winning by building four predetermined monuments, you win by purchasing three monuments from the marketplace. These offer small one-off or ongoing bonuses, some of which benefit all players. Several of the establishments from the original have been tweaked and given different numbers, and there are a few new ones.

The result is a game that shaves about ten minutes off the original’s play time, and that offers a little more variation in terms of starting tableaus and the monuments you buy on your path to victory. But is it better?

Um. On paper, variable starting establishments and a continually shifting marketplace ought to mean each game feels different. In practice, it means less choice. If you draw a card that’s already in the marketplace, it goes on top of the first. A new card won’t be drawn for that space until both are sold, thus, as the game goes on, cards are less and less likely to be replaced, and your options grow increasingly fixed.

Marchi Koro 2 is certainly quicker than its predecessor, thus solving a problem literally no one thought was a problem. Sometimes it can feel like the game ends when you were just getting started.

Grumbles aside, the production is high quality throughout. The artwork on the cards is distinctive and charming, the big, chunky wooden dice feel satisfying to roll, and the plastic coins are functional and hardwearing. Whether the changes to the original are improvements or simple differences, Machi Koro 2 remains a smooth, playable experience, accessible to a wide audience but with some fun interactions hidden inside.

Sure, you won’t find huge depth here, in the same way you can’t access the internet with a banana. To look for deep strategy is to miss the point, and the fun. While this falls some way short of being an essential purchase for fans of the original, as a jumping on point for newcomers, and as a casual game to fill twenty minutes on a rainy afternoon, you could do far worse. 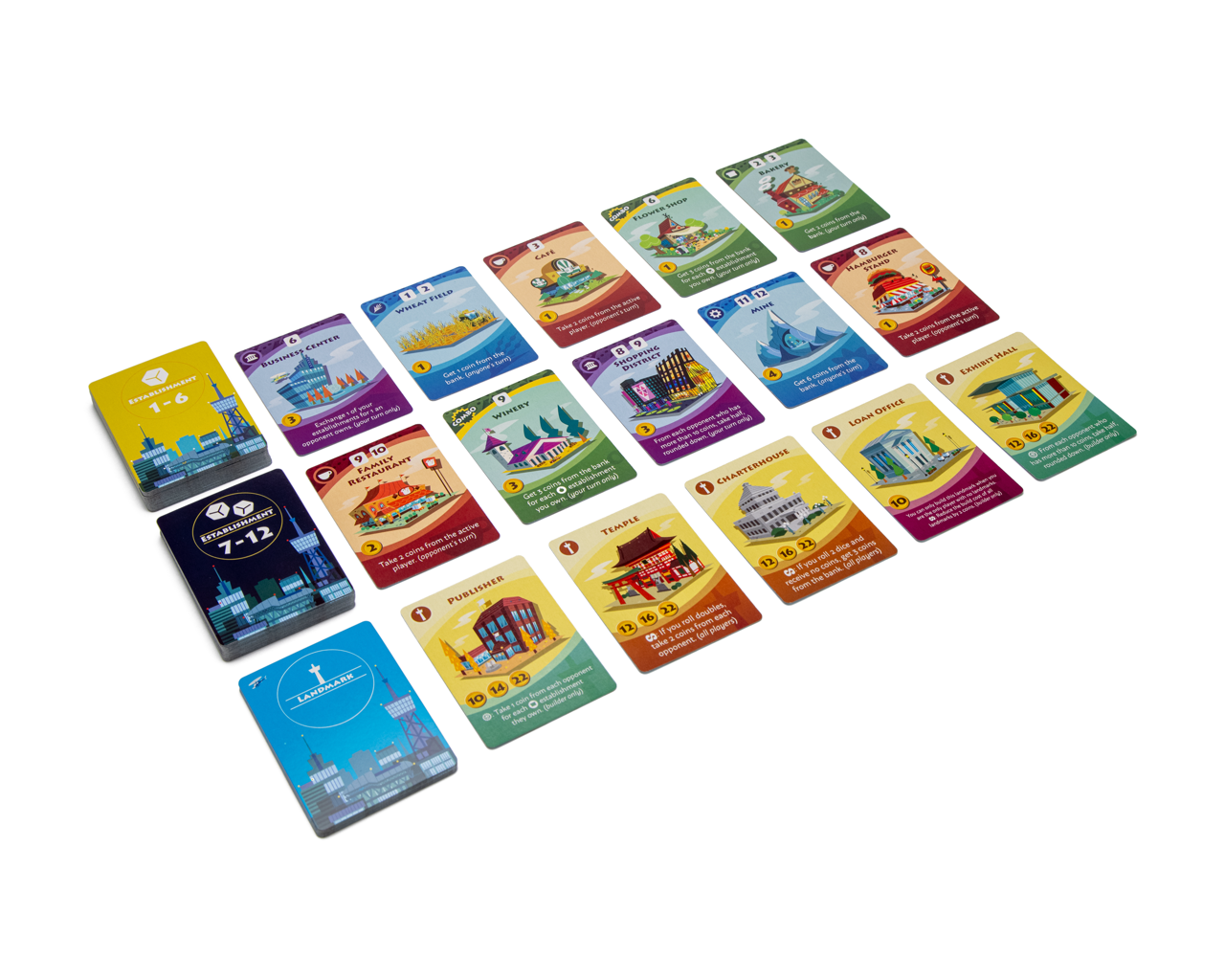 TRY THIS IF YOU LIKED Space Base

If you liked dice-roller Space Base, or if you like the feel of building a card tableau that serves as an econ engine as in Splendor and It’s a Wonderful World, but want something light that you can teach to anyone, Machi Koro 2 fits the bill.