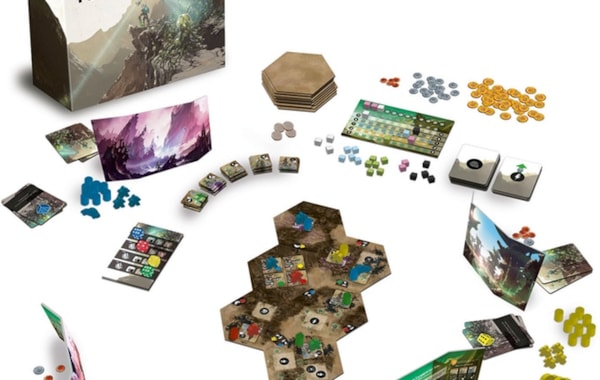 A cautionary tale of alien worlds and magic mushrooms

The year is 2755, and the Earth is dead. Its inhabitants have drained it of its resources, leaving it a barren, inhospitable husk, and humanity has become a spacefaring species, endlessly drifting through the void in search of a world which can sustain them. Now, at last, they’ve found it.

The atmosphere of the planet Myceliandre isn’t conducive to human life. But this newly discovered world offers an incredible resource – a species of mushroom packed with nutrients and possessed of incredible healing properties. It instantly becomes a valuable commodity, and rival corporations dispatch teams of scientists and explorers to harvest the fungus in pursuit of massive profits.

Living Planet sees players become the leaders of these money-hungry companies, and while at its heart it’s a game all about cold-hearted and hyper-efficient capitalism, it soon becomes clear that this planet isn’t going to allow itself to be strip-mined for its resources without a fight.

As you play you’ll explore the surface of Myceliandre, gradually growing the board by building a network of hex-grid tiles showing different locations, all with their own opportunities for development and exploitation. You’ll build mines, factories and power stations, manipulating a separate stock market board to increase the price of resources you own while tanking the value of your opponents’ goods.

It’s a sharp-elbowed, card-driven economic battle reminiscent of its designer’s 2012 game Archipelago, and with each passing round you and your rivals will find yourselves hauling in ever-greater quantities of cash as you develop the planet. But you’ll also have to deal with a constant stream of natural disasters: raging tornadoes, violent earthquakes and giant acid-spewing geysers. The more rapaciously you exploit this new world, the more devastating these cataclysms become, killing your crew and destroying your equipment. Eventually you’re forced to conclude that Myceliandra itself is alive, aware of your presence, and doing its best to rid itself of you.

Living Planet, it turns out, is a game with a deeply environmentalist bent. Mechanically, it’s all about turning raw resources into hard cash as efficiently as possible. But from the planet’s perspective, you’re parasites – a threat that triggers an ever-increasing immune response. Your insatiable drive to maximise profits is no different from a virus’s impulse to spread and reproduce, a bit of mindless evolutionary programming with the potential to kill your host organism.

It’s a game with a point to make, and it makes it in no uncertain terms. But mechanically, it can feel a little dry for its space-spanning theme. It also hands one player the role of the leader for each round, making them responsible for some in-game admin. If it’s your first time playing, it can take some time to understand the process of play, and the result can be a few long, drawn-out games and a jolting stop-start pace while you get your head around each step in the round structure. If you aren’t already a fan of resource-wrangling Eurogames, there isn’t enough that's new here to make you change your mind.

Living Planet paints a bleak picture of the future, and its depiction of humans as a ravaging plague says as much about our own environmental crisis as its imagined far-future corporate society. But despite its ambitious sci-fi backstory, it won’t appeal to anyone who isn’t already into this kind of resource-wrangling Eurogame.

TRY THIS IF YOU LIKED… AUZTRALIA

Martin Wallace’s game of Lovecraftian horror in the outback also blends economic development with an antagonist which actively fights to thwart your efforts. But it's quicker and easier to get into, and comes with a dedicated solo mode.