Battle forest fires with the dead-eyed stare of a porpoise

For a lot of us, forests provide that perfect place to escape from the noise, stress, and claustrophobia of urban modernity. Ancient, mysterious, yet accessible to most, these spots of wildness are the salve to life’s more organised chaos – that is, unless, they’re on fire.

Living Forest confidently thrusts us within this devastating pairing of fire and foliage, casting players as Spirits of Nature willing to repel the destructive flames of Onibi and save the forest. Yet, despite a common goal, only one spirit will succeed at becoming Grand Protector.

There’s a fair bit of setup required here for what, at first, seems like a light, breezy game - particularly when acknowledging the game’s enticingly low price and approachable aesthetic. Consequently though, Living Forest presents an engrossing amalgamation of push-your-luck and deck-building that is perhaps more navigable for players with some familiarity with these mechanics.

Players will begin each game with their own personal boards and identical starting decks before blazing on toward one of three game ending win conditions – planting twelve Protective Trees, collecting twelve Sacred Flowers, or extinguishing twelve fires. Along the way they will enlist the help of Guardian Animals to add to their deck, purchase and place tree tiles on their board, and gain bonus actions by manoeuvring their spirit standee around the central Circle of Spirits.

Unlike traditional deck builders, Living Forest doesn’t restrict the number of cards drawn each turn. Instead, players will draw as many cards as they please – forming what is amusingly known as the Guardian Animal Help Line – and are only forced to stop once the third card displaying a Solitary symbol is drawn. There is a smart use of push-your-luck here as stopping before that third symbol is drawn rewards players with two actions in the next phase instead of the usual one.

The actions themselves are dictated by the Help Line, with players tallying up the totals of one of the five symbols on their cards and performing the relevant action. Having a total of nine sun symbols for example, will permit a player to buy additional cards from the display up to the value of nine, whilst six sapling symbols allows for the purchase of a single Protective Tree tile of value six or less. Trees already planted will also add their symbols to every subsequent Help Line.

Living Forest spices up the often repetitive process of deck-building thanks to a refreshing sense of flexibility within its gameplay. In one play-through I started out gearing my deck toward a firefighting team of tortoises, beavers, and flamingos, propped up by the irrigational powers of a few select trees. Soon though, I realised I had propagated a canopy diverse enough to push me towards an alternative win condition.

Furthermore, Living Forest’s elements of deck-building never feel overly solitary thanks to a clever system that ties the number of cards taken from the display directly to the amount of fire added to the board each turn. This simple design choice enhances interaction and adds a touch of threat and tension on top of the usual ‘Oh. You took the card I wanted.’

Aside from the intelligent design and engaging gameplay it has to be noted that Apolline Etienne’s artwork and particularly the card illustrations are wonderful, falling under the same aesthetic – which I’ve personally coined as ‘eco-whimsy’ – that charmed players of Everdell, Meadow, and Photosynthesis. Although, and this may just be me, I do find the glazed and glowing eyes of each Guardian Animal amusingly sinister. 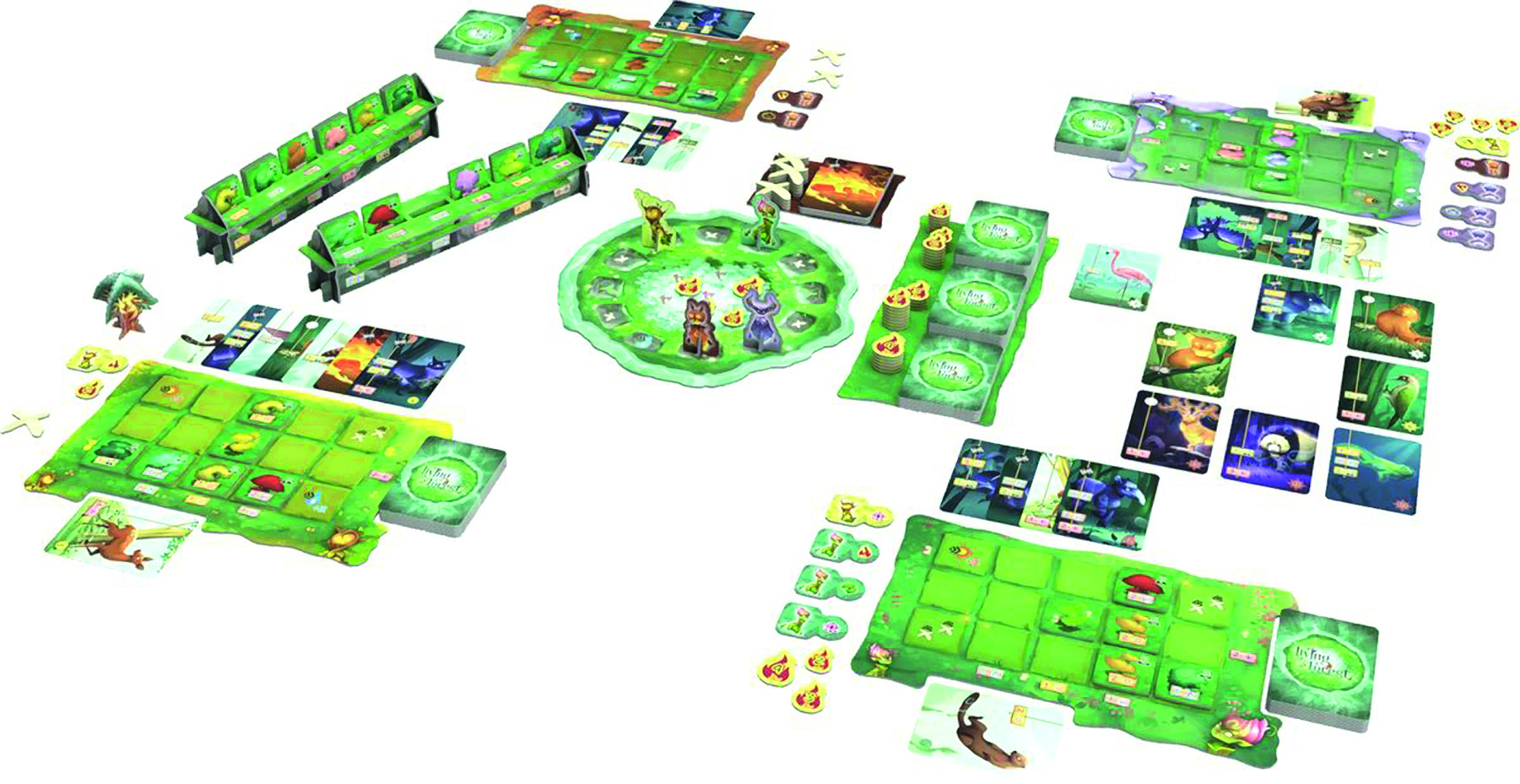 A gorgeous game and a clever design, packed with engaging decisions.

TRY THIS IF YOU LIKED EVERDELL