Famous superheroes in the palm of your hand!

The life of a superhero is one of excitement and adventure, racing against time to save the city from the latest evil-doers master plan.  Now you get to experience that excitement using characters made popular from the recent film franchises such as the Avengers and X-Men with this deck building game from Upper Deck.

Initial setup is straightforward and is based on the number of players which helps maintain the game balance which often leads to nail biting finales.  Players start with a deck of basic S.H.I.E.L.D. agents who can either provide attack power to defeat villains or recruit points which allow the players to recruit more powerful super hero cards to ‘build’ their deck.

The main driver of the game however is the Villain deck.  This deck is drawn at the start of each player turn and can result in the appearance of a villain or a henchman who then move through the city and eventually escape if not defeated.  It can also produce cards to move the Mastermind’s scheme a step closer to fruition, or even allow the Mastermind to attack the heroes directly. The game is co-operative at heart with all players losing if the Mastermind is not defeated, but during the game players are also gaining personal points by defeating villains and rescuing bystanders, which are totalled at the end of the game to determine who the ultimate winner is.

To summarise, if you want a game that closely resembles taking part in a comic book adventure, this is one of the best deck builders currently on the market.  With plenty of expansions available you will soon be creating your own teams of heroes to face the deadliest villains in the Marvel Universe. (Paul Webster) 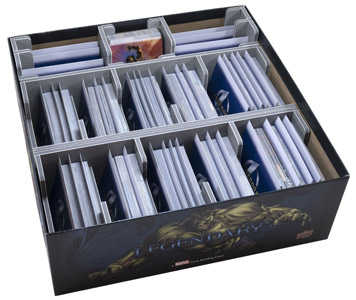 Compatible with Legendary: A Marvel Deck Building Game®, with space for over 1,450 sleeved cards, or 2,000 unsleeved cards.