Kickstarter really needs a Caveat Emptor warning. It’s a website of wishes that’ll sell you mountains of plastic and cardboard based on a single hook.

League of Infamy’s hook is very enticing: a dungeon crawler where you are the villains! Rather than heroes venturing into a dungeon, you play bad guys breaking into an elven keep to kill, smash and plunder. The box is stuffed with charming miniatures as well as custom dice and a small tree’s worth of cardboard. They’ve certainly squeezed in enough stuff to justify the cost, so for those of you who like to reuse the miniatures for roleplaying, this might be an ideal pickup.

For the rest of us, you may want to steer clear.

The game’s biggest disappointment to me is that you never feel villainous. Yes, you’re breaking in, stealing crap and sometimes assassinating, but it’s entirely cosmetic. Each villain player’s turn is spent using three actions to move, kill and loot, in whichever combination they deem fit. After all villains have played, the Keep Master goes, using a hand of cards to play extra abilities and spending alarm tokens (generated at the start of round and by certain villain activities) to add more defenders. This is explained over 35 muddled pages of rules and still would’ve been the same game if you’d been “heroes” staunchly breaking in to do justice, with the only unique feature being “The Infamy deck.”

This deck of cards is comprised of ways to be an arsehole. Each villain has one or two of these secreted away, with the option to play them when certain triggers happen (for example, one card let’s you shove another villain you move past, potentially losing them an action or putting them in harm’s way.) Every infamy card earns you infamy points (which are also gained by killing defenders and certain scenario actions) that are spent to gently nudge dice rolls, as well as being an endgame scoring system. In play, this is just being a prat for the sake of it, as you still need to co-operate to overcome the Keep Master, especially as every infamy card played gives them more alarm tokens, so you better hope your straw wasn’t the one that breaks the villain team’s back.

The base set comes with two game modes that both use the six game scenarios. Campaign plays through all scenarios in sequence, with breaks in-between each mission to divvy up loot and gain upgrades, starting with whoever stole the most and earned the most infamy respectively. The game encourages you to be selfish, but you need every villain to be doing more to succeed later missions. Plus, after the final mission is played, there’s no narrative conclusion. All that infamy you’ve been earning and betraying each other for? Doesn’t matter, just kill the boss and your whole team wins, with no reward for being the biggest arsehole.

Standalone games are slightly better, as they have a win-condition which anyone (including the keep master) can achieve, incentivising the use of infamy cards to stop one villain from storming ahead. But then the game’s other weakness (the reliance on dice rolls for combat and checks) means a player can be stomped into the dirt through no fault of their own, leading to the closest this game gets to a “feel bad” moment.

In short, the game barely delivers on its main selling point and there’s too many other games out of there that better reward the large amount of time League of Infamy demands you commit. One for miniature collectors or backstabbing enthusiasts only.

There is a playgroup who loves miniatures, dice rolling and backstabbing who will get a kick out of this game, but all three are crucial in getting the full value out of this. If just one doesn’t describe you, don’t buy this.

TRY THIS IF YOU LIKED Zombicide: Black Plague

Both games love nothing more than filling a board with miniatures for you to maim and plunder, if you’ve ever wanted a gameplay reason to screw over a fellow player, League of Infamy might be your cup of poison. 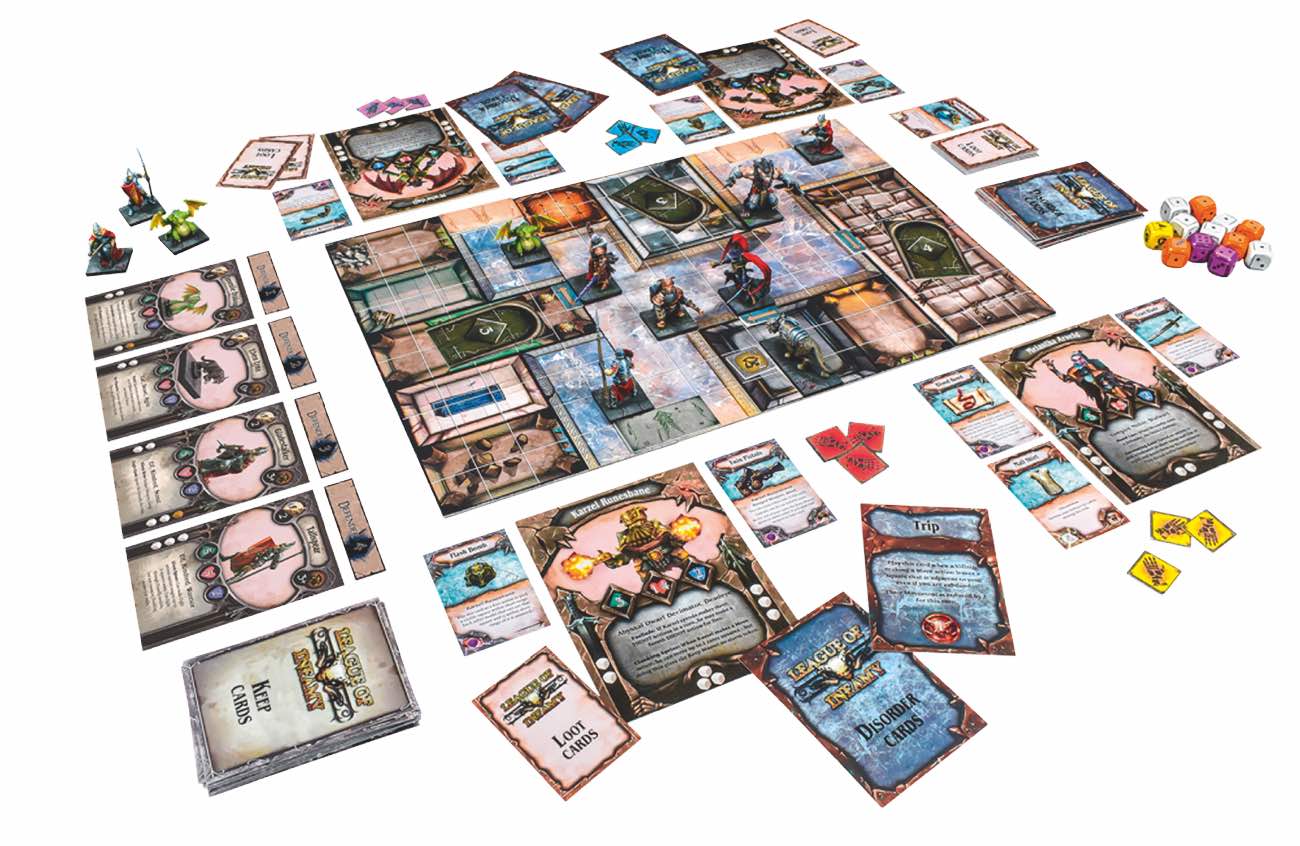