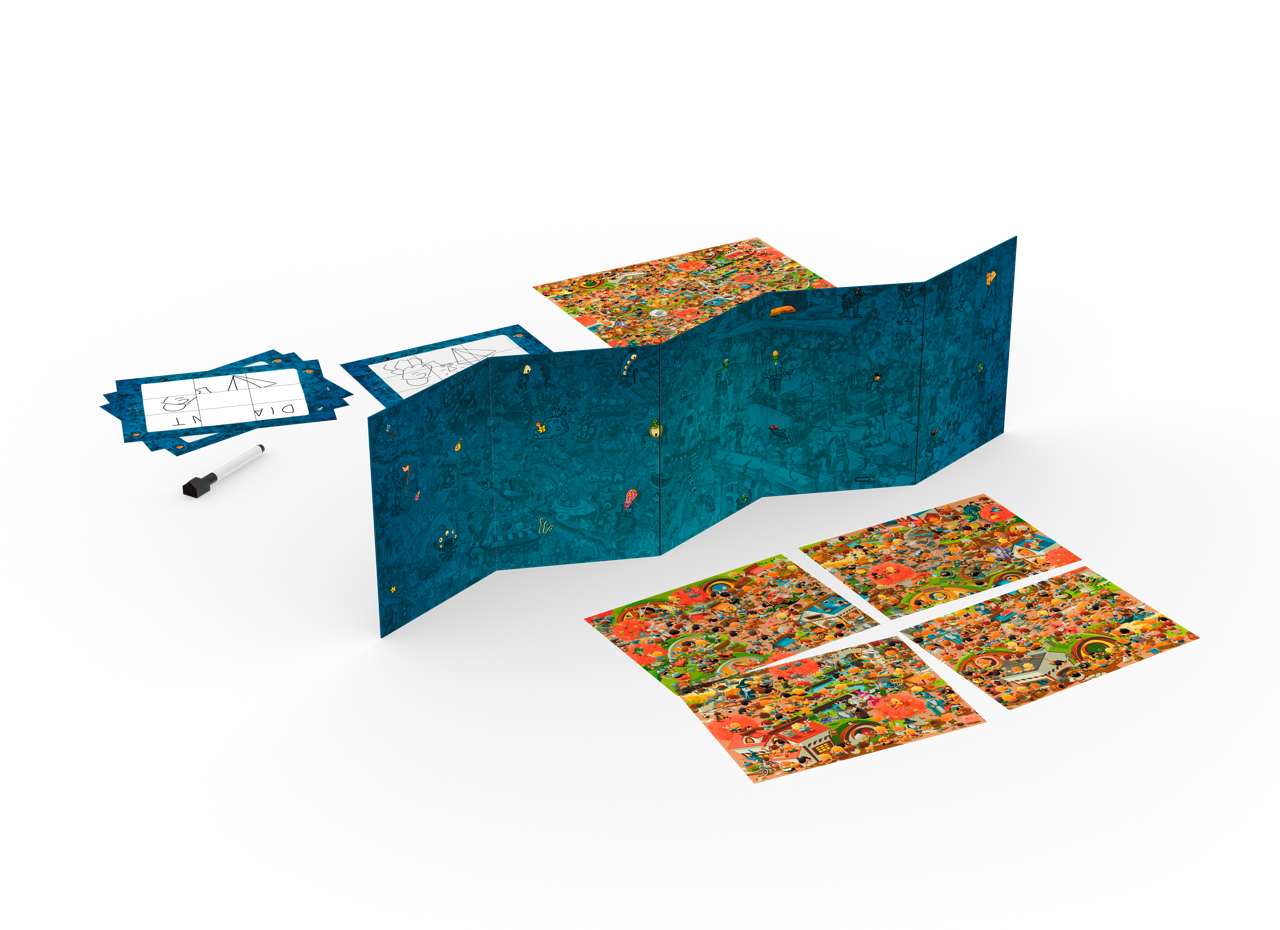 Hats off to the artists behind the sprawling landscapes that make up “hide and seek” activity books. We’ve all spent hours staring dumbfounded at scenes crammed with zany individuals and action, trying to spot bespectacled individuals in striped clothes. It’s surprising it’s taken this long for a board game to capture this challenge, especially one that delivers on it as well as this.

Last Message is a social deduction game like no other, requiring a minimum of three players to take the roles of Victim, Criminal and Detectives (the latter being the role all other players take.) Each game starts with the Victim and Criminal sitting behind a screen and choosing one character out of a sea of hundreds from one of six different pictures. These range from an alien bonanza in outer space to a city full of superheroes and criminals, with a diverse array of themes to keep games fresh for a long time.

Once the Criminal has chosen their character, the victim player has 30 seconds to draw as many clues as they can on a three by three square grid. These can range from single word or image clues, to a complete drawing of the character. Once time is up, the Criminal then gets to rub out a number of squares based on the round, with five squares in the first, decreasing by one each round. Only then is the drawing revealed to the Detectives, who must try to figure out who the garbled mess of incomplete scribbles could be pointing to.

Each round only ends once a character is chosen – get it wrong and you’ve three more rounds left to find the actual suspect, with no idea of how close you were with your last guess. The difficulty curve ramps up nicely to make the Criminal really sweat, as not only can they rub out less and less, but all previous clues remain in the detective’s hands for the rest of the game, letting them build a stronger picture from consistent clues. 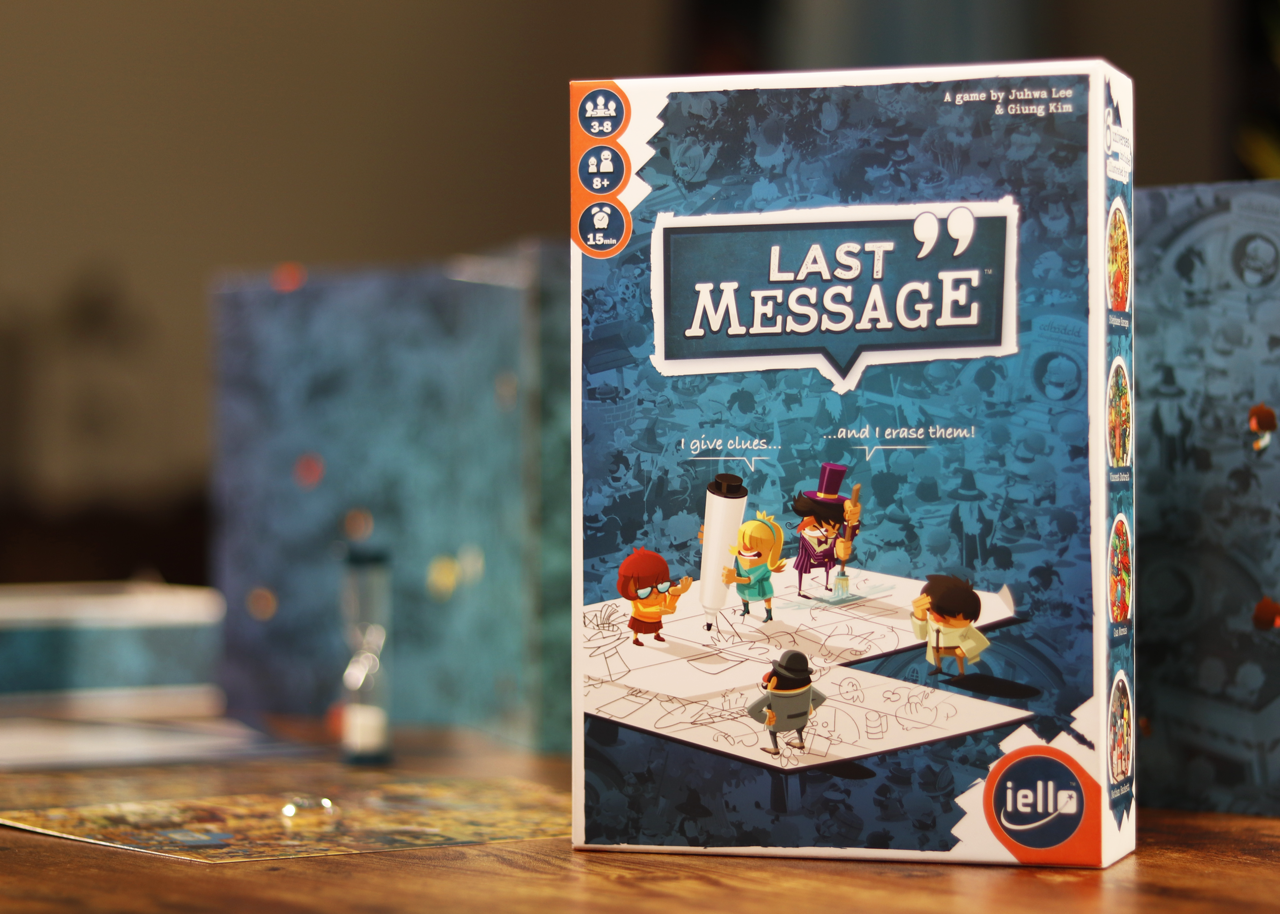 Laughs are loud and often, as players try to figure out which caveman is the culprit when all have to go on is what appears to be a bush, some sort of stick and the word “beard.” The Victim and Criminal are sworn to silence, but it’s practically impossible to avoid groaning in frustration or cackling in triumph. The moment when the Victim goes from being confident in their drawing, to swearing as the Criminal deconstructs their doodle, are the reason why I can never turn down a party game with a great gimmick.

And I use the word “gimmick” both affectionately and a little bit judgementally. This is a game that really needs the ideal crowd to get the most out of it. Whilst playable with up to five detectives according to the box, I wouldn’t advise much more than three for an engaging time, as too many people shouting out ideas and arguing over who to choose makes the novelty wear out fast.

As mentioned earlier the six different maps provide plenty of replay value and a lot of work has gone into creating these madcap bustling scenes. Personally, I would’ve appreciated a ‘difficulty’ scale, as some of the maps are definitely harder to scan than others and make for a less enjoyable first game, whereas by having one map that’s slightly less populated it would be a lot better at easing players in.

You won’t be playing this game all night, but as a quick warm-up game to get your descriptive skills in gear, Last Message is worth looking out for.

While not perfect and certainly capable of causing frustration, the sheer uniqueness of the game and amount of laughs I’ve heard whilst playing it make this a great pick up for fans of light and silly party games

TRY THIS IF YOU LIKED Codenames: Pictures

Another great guessing game where your mistakes only make things more entertaining, if you prefer your games one-versus-all then Last Message may prove the more popular game