Going back in time to tweak a design

Kingdomino is a modern classic. It may only be five years old, but this Spiel des Jahres winning, tile-laying delight is hard to beat as a gateway game or light filler, and its cheerful aesthetic pop and chunky production has become almost iconic. There’s been a few expansions, re-themes, and spin-offs over the years – most recently with the child-friendly Dragomino – but could this latest take on the game be the perfect iteration?

Kingdomino: Origins is very much the game we know and love, albeit transferred to a new prehistoric setting amidst a number of cle 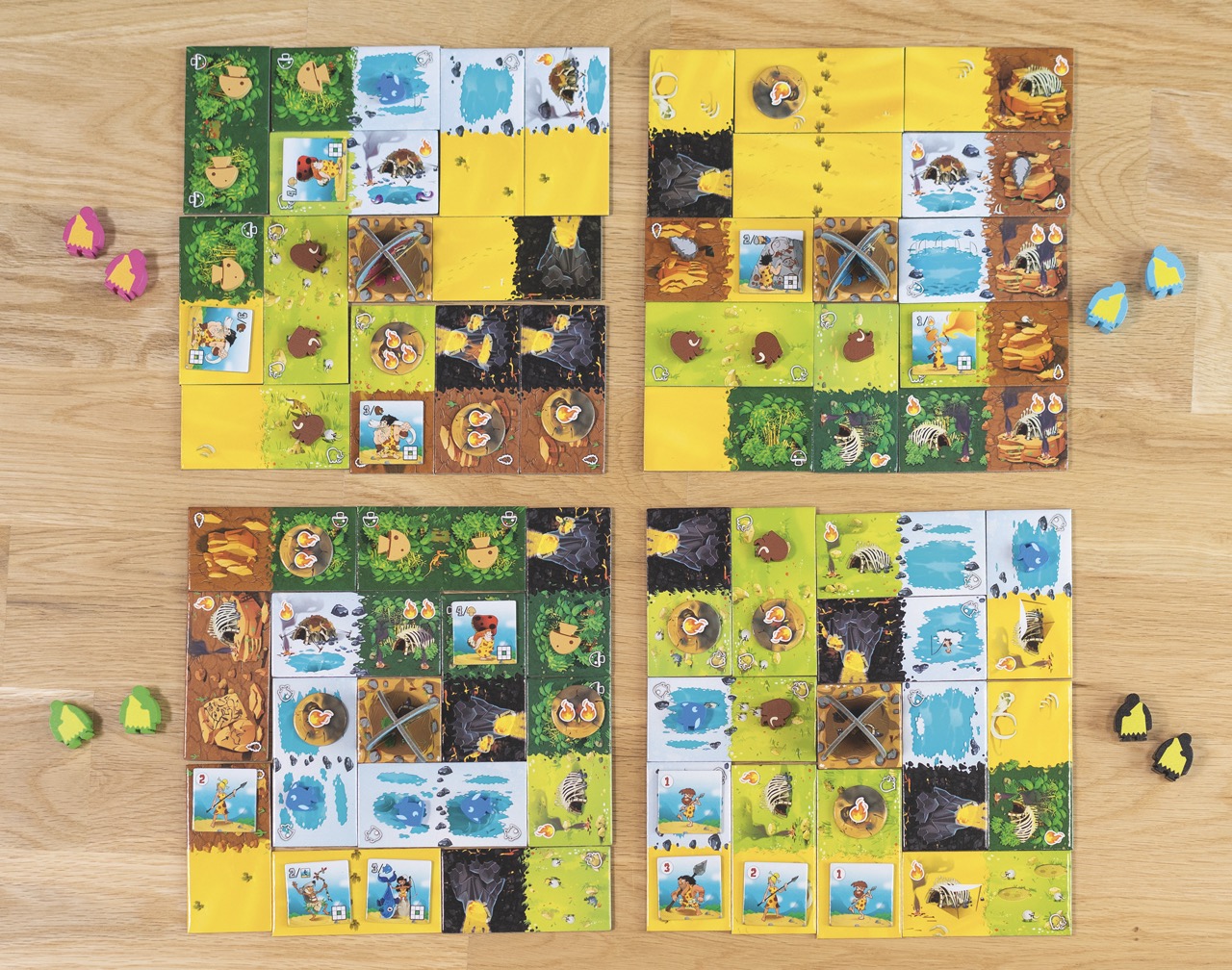 ver changes. Players will still be competing to lay down the best five by five grid through the drafting of contiguous terrain types, but there’s now the option of layering on some subtle changes to mix up the experience.

Clearly understanding the game’s appeal to both novice and more experienced players, Bruno Cathala has given us three separate ways to play: Discovery Mode, Totem Mode, and Tribe Mode.

Discovery Mode will be the most familiar with the only notable changes to gameplay being the addition of volcanoes. These special terrain types won’t score like other regions, instead giving players fire tokens to place on nearby tiles to further boost their score. Fires in Kingdomino: Origins are the suitably thematic equivalent of the original game’s crown symbols, and having this extra element of control over their distribution is a smart design choice. Furthermore, despite this added depth, Discovery Mode doesn’t feel like it’s straying too far from the accessible gateway formula established in Kingdomino.

Totem Mode adds dozens of adorable wooden resources to the game, each worth a point and capable of granting players’ extra points if they hold a majority. Despite the slightly tedious job of placing resources on their matching regions before each draft, Totem Mode is ultimately very simple, resulting in an aesthetically pleasing and gently tactical addition to the game’s core gameplay.

In Tribe Mode resources act as currency for recruiting tribe members. Hunter-gatherer and Warrior Cavemen tiles can now be procured from a central display, at the cost of two different resources, and then placed upon players’ grids. These nicely illustrated little tiles will usually score points for each of a particular resource surrounding them, or for creating contiguous groups in the case of the Warriors. For the steep cost of four different resources any tile can be chosen from the facedown stack – perfect for sneaking in a final bunch of points before the game ends. These extra strategic considerations are satisfying, and in truth, many players will likely stick with this mode indefinitely, occasionally dipping back into previous modes to welcome new players.

Admiring each players’ finished grids following a play-through of Tribe Mode (particularly with the two player seven by seven variant), its hard to deny that the game feels deceptively grand. From the generous smatterings of shaped wooden resources dotting the landscape, to the precise arrangements of tribesman representing a variety of end-game scoring – everything in Kingdomino: Origins somehow feels like more than the sum of its parts.

Blue Orange have achieved something pretty remarkable with this latest box; creating a game that transitions from a smooth gateway experience into something resembling a condensed euro-game. Ultimately, this versatility makes Kingdomino: Origins a worthy addition to any collection.

Whether you’re introducing a friend to the joys of gaming or looking for that extra bit of depth from your usual filler games, Kingdomino: Origins has it covered.

TRY THIS IF YOU LIKED KINGDOMINO

In this reviewer’s opinion, Kingdomino: Origins transcends the original, with its versatility ensuring it stays in your collection for years to come.