Iwari oozes an ethereal quality. At the start of the game, the land is barren. You can almost feel the frost blowing across the tundra and creaking trees echoing in the empty forest. Each player manages a tribe of early settlers trying to claim land and establish connections across different terrains. You start with nothing but during the game you must build your presence to demonstrate your power. 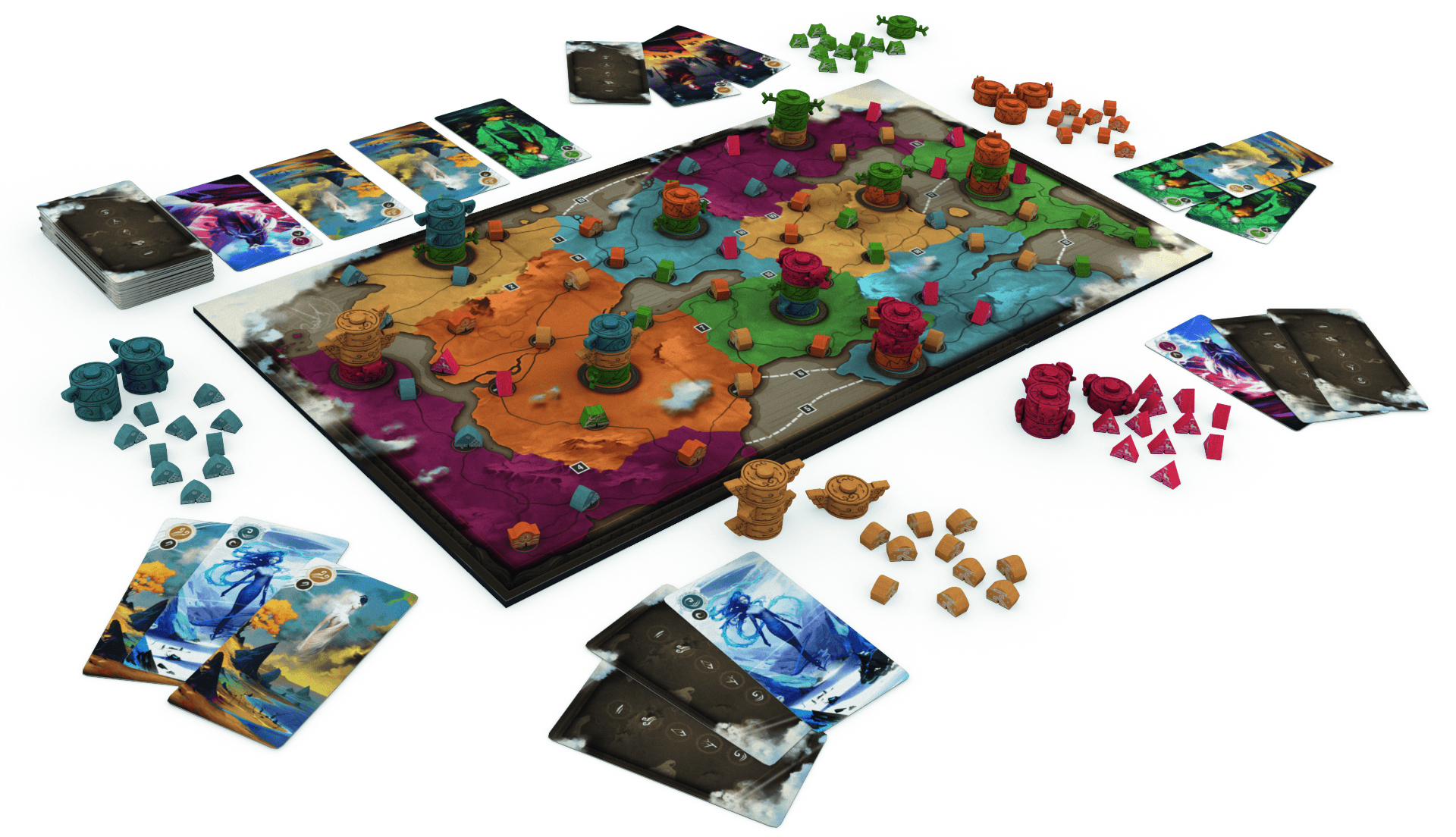 You start each turn with three cards in hand. Each card indicates one of the five terrain types. A pile of tents and eight totem sections are at your disposal. On each turn, you must play one or more cards from your hand to place tents and/or totems within the territory indicated on the card.

The actions are straightforward but the scoring makes this area control game sing. There are three different types of scoring. Totem and settlement scoring occur at end-game, but tent scoring takes place twice. With tents, each player’s score depends on the presence of others within that region. The number of tents a player has affects their scoring position, but the number of tents another player has determines their score, providing a lovely interaction between players.

Settlement scoring gives players points for each tent in clusters of tents on connected pathways. But you can only score with totems if you have a totem majority in two connecting regions. A single territory may border several other territories, so well-placed totems can be very fruitful. Not every connection is scored though, as mountains may lie on some borders.

Scoring tents halfway through the game is genius. It forces you to make key decisions early on in the game. Maybe you’ll focus on tents in order to double-score them… but should you focus on one area or scattergun across the board? There are benefits of both. But get too caught up in tents and you’ll forfeit totem scoring. Prioritise totems and you may soon run out of pieces as these are in short supply. Ooooh, it’s a gorgeously meaty problem.

At the end of each turn, you draw back up to three cards. Your choice of cards determines the actions that are available to you next turn. But a lot can change in a round, particularly at higher player counts, so it’s useful to try to predict the actions of other players to inform your decision, which of course can slow down the game. The cards impose an interesting restriction, forcing players to be reactive and to continually adapt their strategies to the ever-changing landscape.

Players also have the option of adding in ‘feats’. Each of these majestic structures is claimed by the player who meets certain conditions and placed within a chosen territory, multiplying the score within that area. The race for these game-changing beauties can affect a player’s entire strategy. Add different combinations of feats to your game to mix it up a bit.

Flipping the board and playing on the other side also provides excellent variation. On one side there are fewer, bigger territories, while the other has many more territories with far fewer spots for tents creating a very different game.

Iwari also offers a compelling two-player variant. Despite initial misgivings about the players collectively manipulating a third tribe, I was won over by the rich implications of the actions. After making their own move, players are forced to play for the third tribe using remaining cards. You may use the third tribe to help yourself or hinder your opponent, but unless you’re out of cards, you must play.

It’s annoying that two of the five player colours look almost identical, but it’s a small complaint which can be forgiven. The quality of the production is outstanding and the artwork is beautiful. This is a gorgeous game that pulls you into a misty, captivating world.

To triumph, you must have a laser focus on short term gains while always keeping an eye on the bigger picture. Ignore the actions of other players at your peril: you must always stay one step ahead. Area control fans won’t be disappointed by Iwari.

TRY THIS IF YOU LIKED:  El Grande

The restrictions are different but push battles for influence and the tiered and repeated scoring of Iwari is evocative of the older classic.