It's a Wonderful Kingdom Review Over the years there have been a number of games getting tidily trimmed and tweaked for the two player market. My entrance to the hobby was in fact the increasingly rare Carcassonne: The Castle – a two player only powerhouse duet from Reiner Knizia and Klaus-Jurgen Wrede. Since then games such as Caverna, Catan, and Codenames have followed suit, offering compelling distillations for tabletop twosomes everywhere.

It’s a Wonderful Kingdom is the latest exemplar of this trend, condensing the action of It’s a Wonderful World into a svelte, fantasy tinged duel of cards and cubes. Players will be competing to seize the throne by developing the most efficient kingdom, using the same engine-building and resource management mechanics of its predecessor, but with some new and highly interactive additions to the core gameplay.

Cutting to the chase, It’s a Wonderful Kingdom features one of the best two player drafting systems I’ve encountered, largely due to the introduction of bluffing mechanics. Each round players will be playing two cards next to the central board - either to one or both of the offering areas. The opposing player then choses a side, taking all cards there before repeating the process for their opponent. Complicating matters though are traps: cards played facedown and potentially hiding negative point scoring Calamities. Of course, dependent on your bluffing game, they could just as easily hide a powerful card you’re hoping to snap up yourself.

Aside from the obvious tactical edge traps bring to the game, there is also the irresistible tension of choosing between playing it safe or taking a guaranteed useful stack of cards - albeit with the simmering threat of a face-down trap. The designers have been wise though not to saturate the gameplay with these often risky choices, as players only possess two of these trap tokens to use each round and just one Calamity card each in their hand of eight. 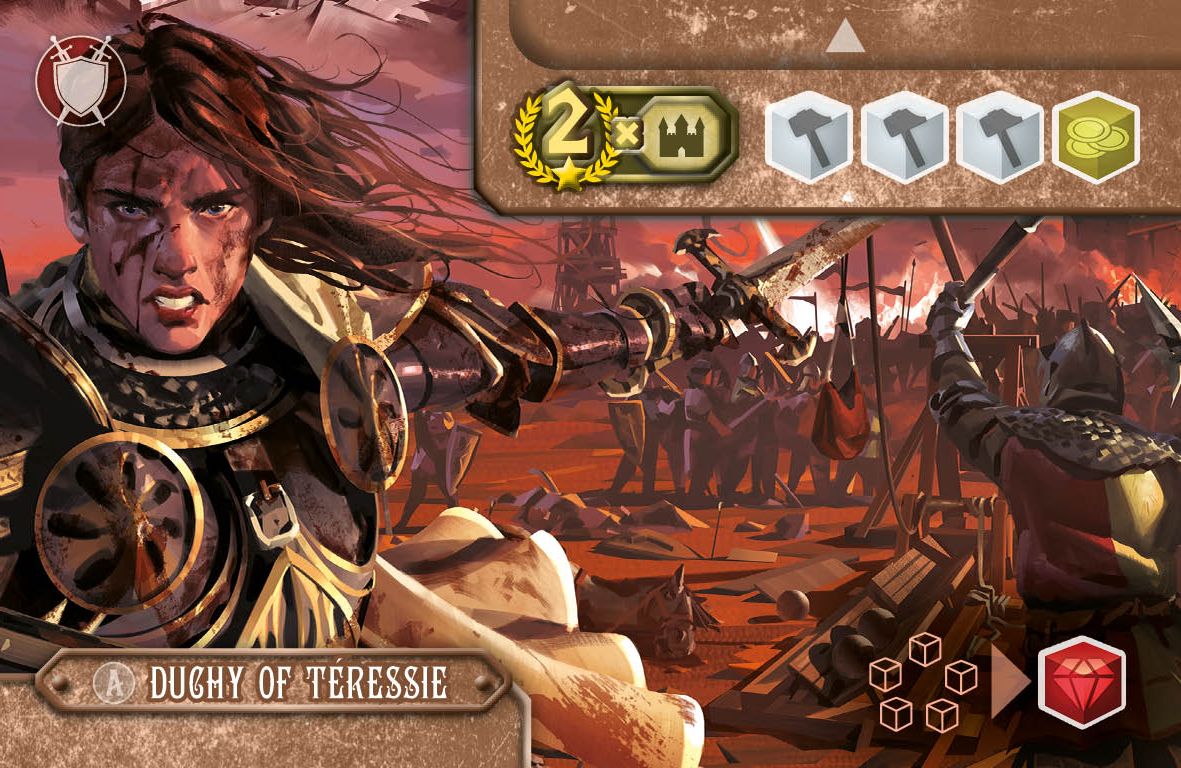 Actually, winning the game involves more than just card drafting though as players will need to build their kingdom through the generation of resources. The games four main resources can be gained either by ‘recycling’ cards for a small gain, or by building resource generating cards. These can be constructed during the production phase where resources are sequentially dolled out and then assigned to any buildings under construction. Once completed they will generate the resources, end game points, or points multipliers needed to win.

This simple but engaging engine-building system is made all the more interesting when combined with the game’s mandatory ‘modules’. Each game requires the use of one of three modules, each offering various levels of complexity and player interaction. Advisors add special abilities to the game whilst Menaces act as more troublesome Calamities, with Quests adding further win requirements and ways to spend resources. With plenty of variety within the modules themselves, there’s more than enough here to keep the game feeling fresh for many plays.

The manner in which It’s a Wonderful Kingdom feels excellent from the very first play-throughs yet manages to improve incrementally over time is a sign of great design. It demonstrates both accessibility and depth, with experience and familiarity opening up new ways to approach the game - before even switching out the different modules or attempting the solo mode. Overall, this is a deceptively voluminous game worth revisiting again and again.

An excellent two player game with novel drafting mechanics and a simple design that belies its overall depth.

TRY THIS IF YOU LIKED 7 WONDERS: DUEL

A worthy alternative to one of the best two player games out there.