Islands in the Mist Review Not worth getting misty eyed for

Just how many mysterious islands are there in the tabletop hobby? From the eponymous island of Catan to Forbidden Island, Fireball Island, Spirit Island, Dinosaur Island and any number of others, there seems something about isolated land masses that appeals to the gamer psyche on a fundamental level.

If you just can’t get enough island adventure, Islands in the Mist comes with not just one sea-surrounded outcrop to explore, but a private island for you and each of your friends! As you might have gathered from the title, they’re blanketed in rolling mist. As an intrepid hot air balloon pilot, it’s up to you to ride the winds from one spot to another, unveiling the terrain beneath the fog and charting an unexplored landscape as you go.

It sounds like an exciting proposition, but Islands in the Mist turns out to be a pretty sedate take on a premise that seems to promise peril and adventure. On each round, one player rolls a set of dice to determine which way the wind blows. On your turn you’ll be able to drift in the direction you’re carried, or spend energy points to shift your course and veer towards more promising spots on the map. Along the way you’ll collect terrain tiles showing different types of land – forests, grassy plains, mountains, swamps – which you can leave in your wake in point-scoring configurations. 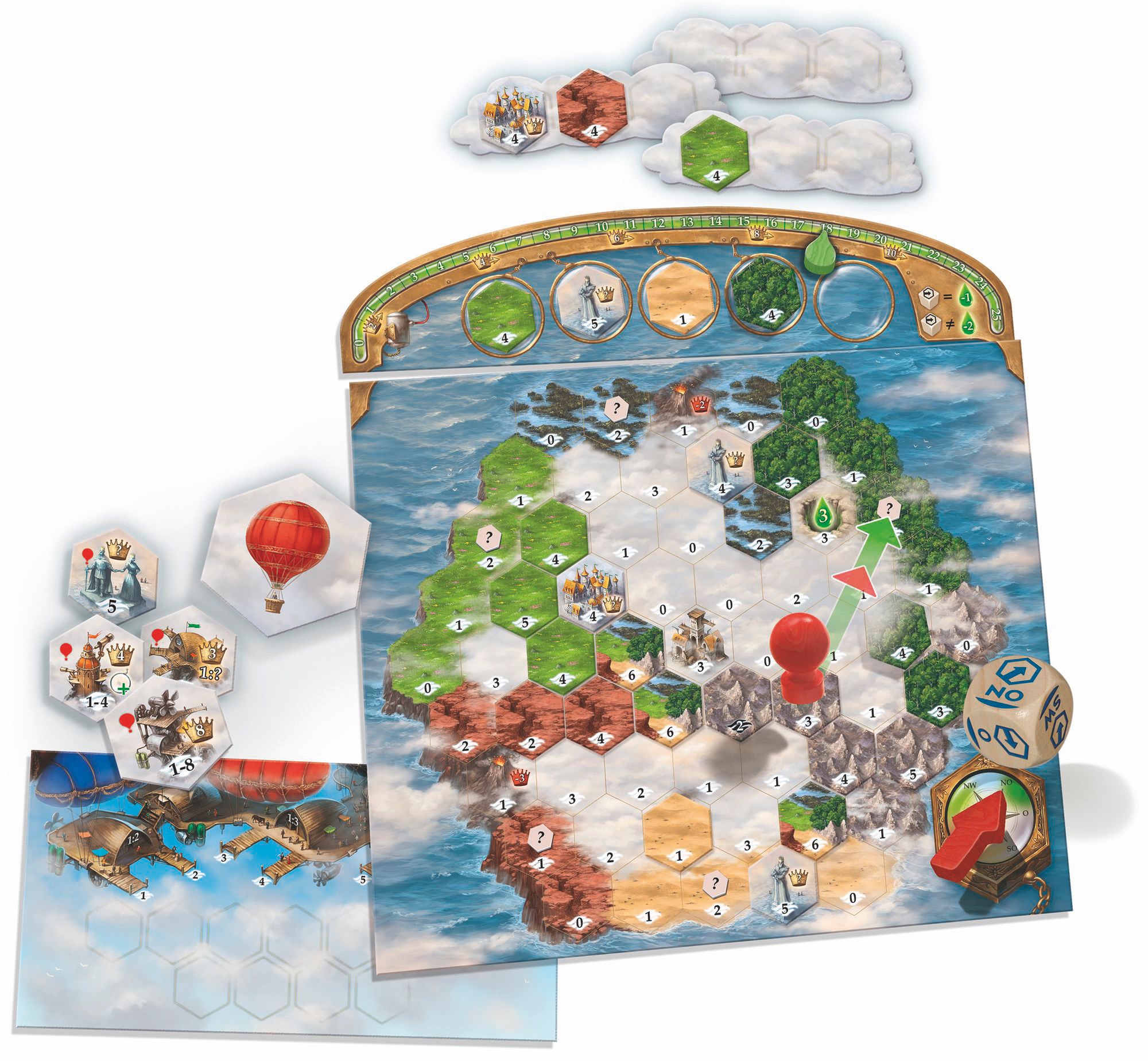 There’s nothing wrong with this kind of analytical, logistical puzzle. Where Islands in the Mist fails to really grip, though, is in the way it presents you with a series of pretty similar decisions. Should you float with the wind, or spend energy points to reach more opportune positions? Should you stash terrain tiles to fill your map, or trade them in to gain more energy? Repeat until finished.

There’s also a lack of any meaningful interaction with your fellow players. Other than occasionally (and usually coincidentally) snatching a tile they might want, there’s almost nothing you can do to frustrate your rivals’ plans. And yes, I get it: this is a Eurogame. For many people this emphasis on individual optimisation over direct, head-to-head competition is a feature, not a bug. But the repetitiveness, insular atmosphere and dry treatment of the theme combine to make for a less-than-thrilling atmosphere where it’s tempting to whip out your phone and check Twitter as you wait for your turn to come around.

The game does come with a couple of add-on modules. The harbour mini-expansion adds new ways to swap and switch the terrain tiles in your supply, while the developments module lets you place special tiles to unlock new abilities. Getting through the unadorned basic version of the game feels like a chore, though, and the new possibilities of these bolt-on bits don’t feel like an adequate reward.

Its charmingly chunky wooden balloon pieces are a plus, but far from making your spirit soar with excitement, Islands in the Mist is likely to leave you and your opponents feeling decidedly grounded.