Opening the box, I had no idea what to expect from Hop!, the airy dexterity game from Ca$h ‘n Guns designer Ludovic Maublanc.

At first glance, the cover artwork depicting blue skies, clouds and chubby-cheeked cartoon kids floating about on balloons brought to mind Pixar’s modern movie classic Up, while the name itself recalled simplistic roll-and-move children’s titles relegated to toy – rather than game – shops. Ultimately, Hop! ends up straddling the line between becoming a more accomplished tabletop experience and an accessible kids’ hit – with surprisingly engaging results.

The first thing to note is the game board, a multi-tiered construction you’ll need to piece together each time you play. It’s a little unnecessary for what is a very simple title at heart, but the verticality of the stacked layers helps to capture the joy of the race to climb through the clouds and reach the seventh space first. The space is itself a clunky white cap that slots on top of the crossed main pillar and the side clouds are loose-fitting bits of card that seem thrown in for the heck of it, but the board is otherwise nicely decorated with dreamy blue skies, God rays and fluffy clouds. 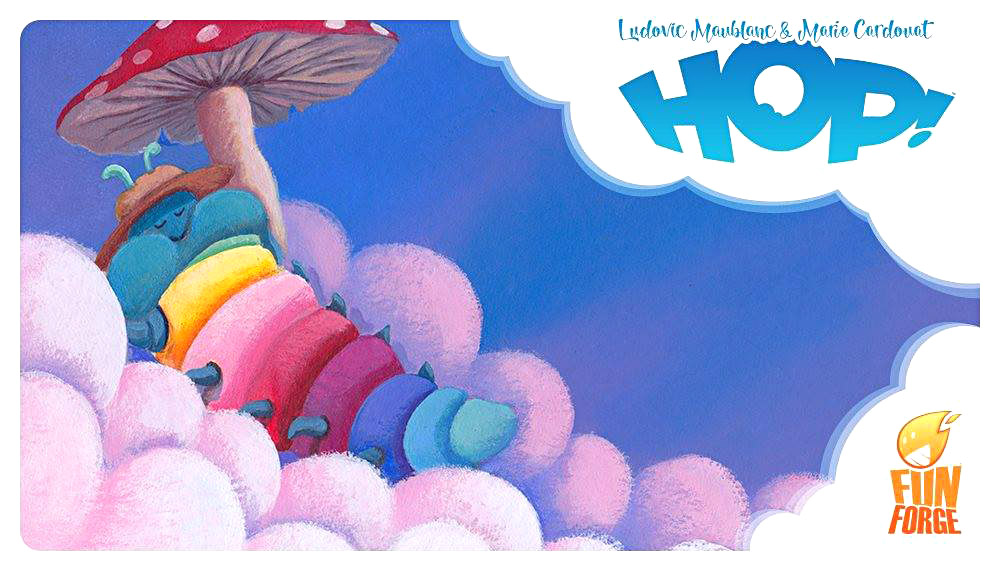 Climbing the clouds comes down to a simple dexterity test, which involves throwing a fabric rainbow hoop over the index finger of another player – land successfully and you’ll jump up a level. Complicating the matter are dare cards, which offer random extra challenges that must be completed. Each trial is given an adorable title that reflects its nature, from throwing the hoop while stood on a chair (The Ladder) to throwing it while laying facedown across the chair (The Superhero). The artwork on each of the cards is gorgeous and the names and challenges bring a real sense of delight to the otherwise one-note mechanic – even in an adult group, we found ourselves laughing (and groaning, for those throwing) at some of the more outlandish feats.

Other players bet secretly on whether they think the thrower will complete their pass to the catcher. Correct guesses either way earn dove tokens, while getting it wrong will attract a crow. Earning three doves means going up a level, while gaining three crows or missing a throw will pop one of your balloons – lose all five and the game immediately ends.

In another fun twist, some of the dares invite additional players to help or hinder the thrower and catcher – these tasks are just as amusing, from knocking the thrower’s arm as the hoop is released to making an annoying repetitive sound in their ear to try and put their aim off. Succeeding means picking a random cloud token from around the board, each of which has a random points total – including some with a fat zero.

Hop! is a beautiful, simple game with a lot of heart which is great fun to play – though with 50 separate dares, the long-term replayability is questionable. (Given its kid-friendly appeal, we’d hate to suggest it would make for late-night laughs after a drink or two – but it would.)

The package is perhaps a tad pricey for what’s in there (the artwork may be pretty but the cards and inlay are disappointingly flimsy) but if you’re a parent after a quick game to play with the kids that won’t make you groan when it’s pulled out the cupboard, Hop! might be well worth the high price of admission.

With gorgeous visuals and laugh-out-loud, simple mechanics, Hop! somewhat overcomes its high cost and meagre contents to offer an experience that can be enjoyed by old and young alike.