Thousands of board games take mediocre gameplay and pair it with an exciting theme that papers over the mechanical cracks, but many of the greatest tabletop titles begin with a seemingly mundane area of interest and elevate it with outstanding mechanics, revealing the fun and fascination in the mundane. So it is that Great Western Trail is set in the American Old West but features no gunslinging shootouts, moonshine-swigging outlaws or hangings at dawn; instead, what will keep you pinned to your seat for two-odd hours are cows. Grass-munching, methane-producing, mooing bovine.

Okay, that’s not entirely true. As in the actual American Frontier, cattle herding is only a single part of the multifaceted design in Great Western Trail, but it is the core of the game, as players make the long trek from Texas to Kansas City to send off their livestock on trains to pastures new. As you repeat the journey up the board, you’ll need to manage your herd, represented by cow cards of different breeds and values in your hand.

There’s a deckbuilding aspect to having the best hand of cows by the time you hit your destination, as cattle can be purchased from a shared marketplace at certain locations – but are only worthwhile in the short term if you can get them into your hand by the end of the trail, earning more money and victory points by reaching further-off cities.

You’ll also be trying to hire staff, including cowboys, workers and engineers, who can help you buy better cows, construct more advanced buildings along the path and get your personal train further along the railroad that runs along two edges of the board – all of which works towards refining your herd and selling it for the most money possible by the end of the game.

Meanwhile, there’s also the potential to run into natural hazards such as floods, rockfalls and drought, or be forced to trade with Indians – though this can go in your favour if you’re careful.

There’s a lot happening, and both the main and player boards can look intimidating at first glance with countless icons, arrows and tokens. Like the recent Scythe, however, designer Alexander Pfister has managed to create a flow of gameplay actions and decisions that quickly begin to feel very natural and easy to understand, keeping the strategy complex without overloading players’ turn-to-turn juggling of all the elements involved.

For one, each turn only tends to consist of one or two simple actions, dictated by the space that the player lands on that turn – although a variable movement range, diverging paths and the chance to construct personal buildings between neutral outposts offers plenty of tactical scope. The actions are dictated by smart use of the symbols, which effortlessly become a second language, and the boards – while visually busy – mean there’s very little consultation of the rules once everything’s flowing a few turns in. 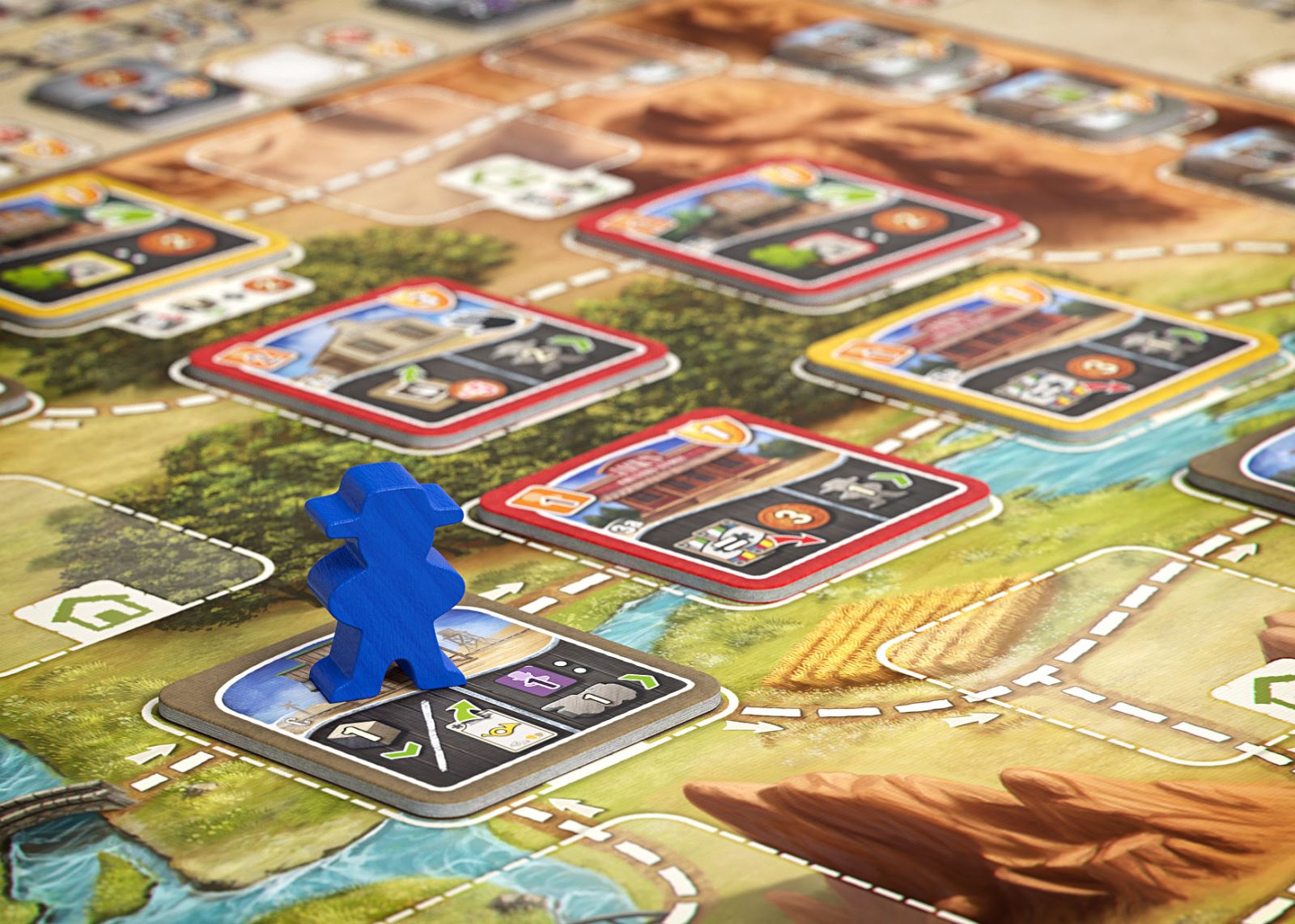 One of the most pleasant surprises we found was that, despite the number of things to pay attention to at a wide level, there was little to no analysis paralysis among our group – although actions can have complex repercussions, each momentary decision is often a simple one, keeping everything driving steadily onwards until the final turn.

Great Western Trail is a Euro at heart and, true to the genre, there is a significant ‘points salad’ series of end-game calculations to determine a winner. Unlike some Euros, however, it’s much easier to track exactly what you are working towards on every turn, whether it’s pursuing a specific breed of cow to achieve one of the optional risk-reward objective cards or bolstering your workforce to unlock more powerful abilities – such as by claiming one of the train stations encountered as your engine puffs along the tracks.

The many interlocking cogs – managing cow cards, placing building tiles, hiring workers, advancing your train, earning money, achieving objectives – are greased by the need to traverse the trail time after time, with players shipping off their herd of cows and adding new elements to the board once they reach Kansas City before returning to the beginning of the track with a slightly upgraded player mat.

The repetition of the journey not only works thematically, joining the many other goings-ons in building up the feeling of day-to-day living of the Wild West, but also provides a comfortable level of familiarity during each game, with players learning which routes to take for certain outcomes and focusing their building efforts on making their personal route as prosperous as possible. As well as the chance to explore new paths on the board, the steady acquisition of cows, buildings and player upgrades also helps to evolve the gameplay throughout, keeping player choices interesting and introducing fresh options every time you embark on the journey once again. 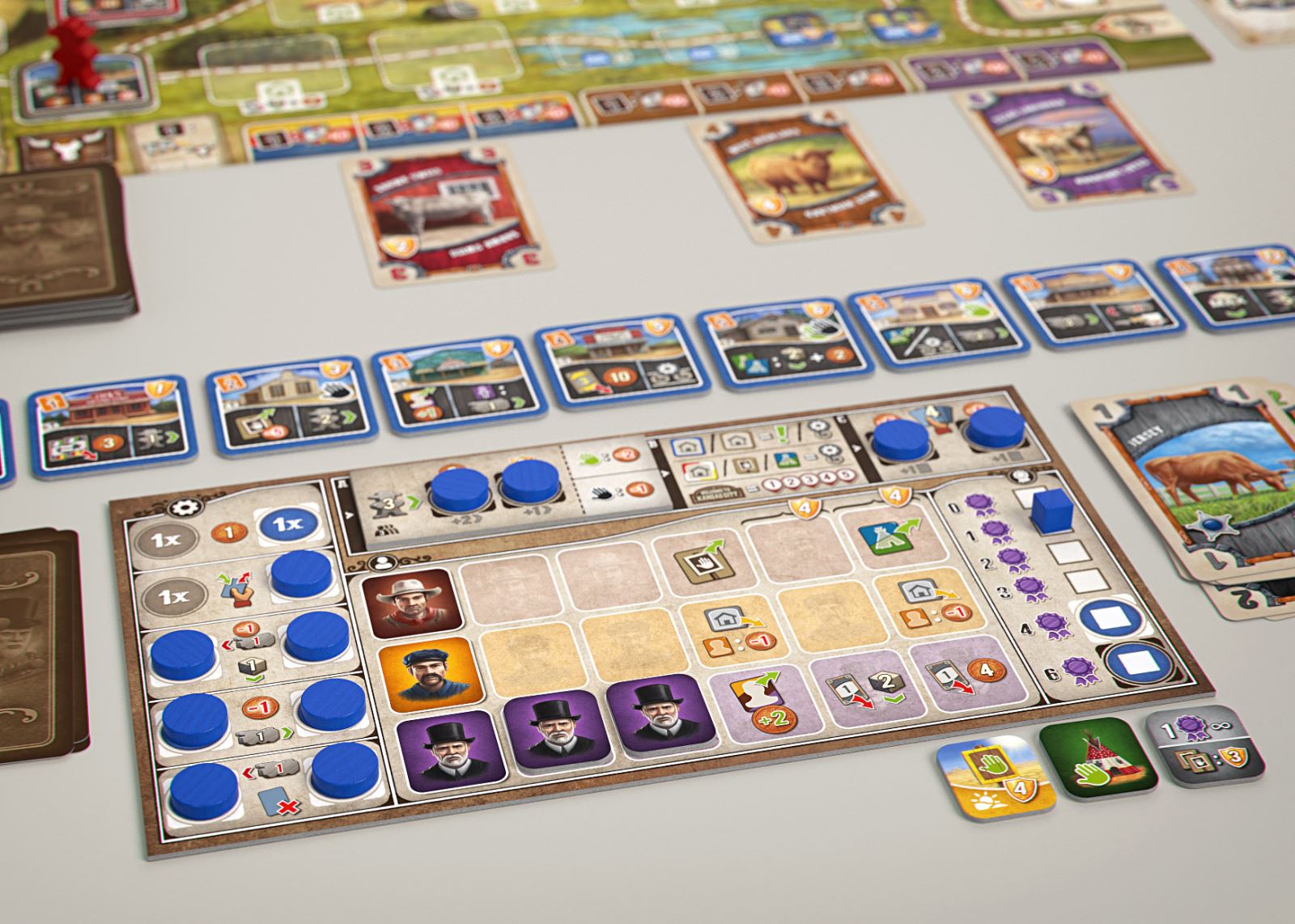 Although the game can take upwards of two hours with more players, it never feels overstretched or exhausting – once the group collectively reaches Kansas City a certain number of times and fills up the job market (the number required varies with the player count), it ends, providing enough time for players to find a secure groove and establish their own strategy but stopping long before things become dull. There’s enough variety in the game mechanics as they are to keep things fresh for a long time to come, but many of the setup and starting elements have alternative versions or can even be randomised for yet more variation.

Great Western Trail is a masterful amalgamation of deckbuilding, hand management, tile laying, building management, economic strategy and more, which always feels hearty and fulfilling to play, rather than tiresome and convoluted. Although the mechanics come first, the historical theme and setting permeates the gameplay, providing a richly engrossing experience – even more impressive given that repetition is a core element. It’s a journey you shouldn’t hesitate to set out on.

There’s a lot going on in Great Western Trail, yet it all comes together to offer an experience that is absolutely top-notch. Complex decisions are made easy to manage thanks to the flawless design and the brilliant theme shines through the gameplay. It’s sure to leave you mooing with pleasure. 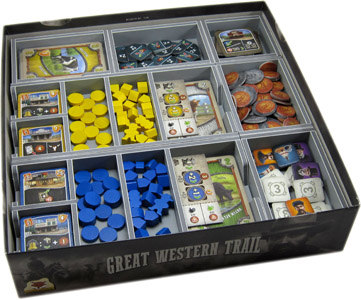 Compatible with Great Western Trail®, and Rails to the North® expansion.