Being a nine ton prehistoric lizard is hungry work. After all, you’ll need more than two hundred thousand calories a day, or 140 kilograms of meat, to keep you going, and Nando’s hasn’t been invented yet. Luckily there are two to five players gathering around a table to help feed these titanic beasts, with a series of smaller beasts.

The game follows a pattern of taking a double hex (like they’ve been stuck together) from the animal board and placing it in their own personal ecosystem. If you empty the columns of the board, it triggers that animal’s movement.

Players begin with a starting tile of seven hexes, with the three main biomes presented around the edges, and a dinosaur nest in the centre, on a mountain. Each of these has an appropriate creature in it – a rat in the jungle, a rabbit in the plains, a frog in the water and of course, a dinosaur on a mountain. Players place their double hex, and, with that, any associated animals marked on it. This might be more frogs, but it could also be a predator.

When the prey animals are activated by emptying a column they breed, adding an additional meeple of the same kind to adjacent hexes. When predators are activated however, they move (as per their pattern), eating everything in front of them, leaving offspring behind. If the dinosaur is in the column activated, then he goes for a wander for a snack too. Of course, the dino is only going to be satisfied (and therefore produce more dino eggs, which can be converted to points or more dinosaurs) if it eats something large enough – a predator for example. Don’t feel too bad about the eagle eating all those frogs then, as it too will be someone’s dinner.

One of the things players will have to consider for the dino or carnivore rampage isn’t only if they could, but whether they should, eat everything. If a carnivore is activated, but can’t manage to eat anything on its hunting path, it starves. The game emerges as a series of planned paths through the buffet of small and large creatures – a buffet you’re having a lay on during previous turns. Equally, because you’re a little in control of which animals trigger each turn, setting off a carnivore turn before your opponents have set up their prey can be a satisfying strike. It’s not massively conflict heavy, but there is a little bit of eyeing up everyone else’s ecosystem to make these moves.

The pleasure comes from a well executed plan, whether that’s on the offensive, pushing for early activations, or just smart tile placement that promises a good snack pathway. Balancing your dinosaurs at the top of the food chain – and not turning all your eggs into dinos straight away – has a great feeling to it. Arrange the arrival of everyone’s dinner just in time, and you have a perfect storm of points that is as satisfying as a really good lunch.

If bringing out your inner carnivore and carefully managing the meal plan of prehistoric monsters suits you, then there are few better, and simpler, games to get your teeth into.

TRY THIS IF YOU LIKED Karekare

If you’re a fan of hexagonal tile laying and building up an ecosystem of your own, Gods Love Dinosaurs is a good place to move on from when you’re done with the Polynesian expansion that is the underrated Karekare. 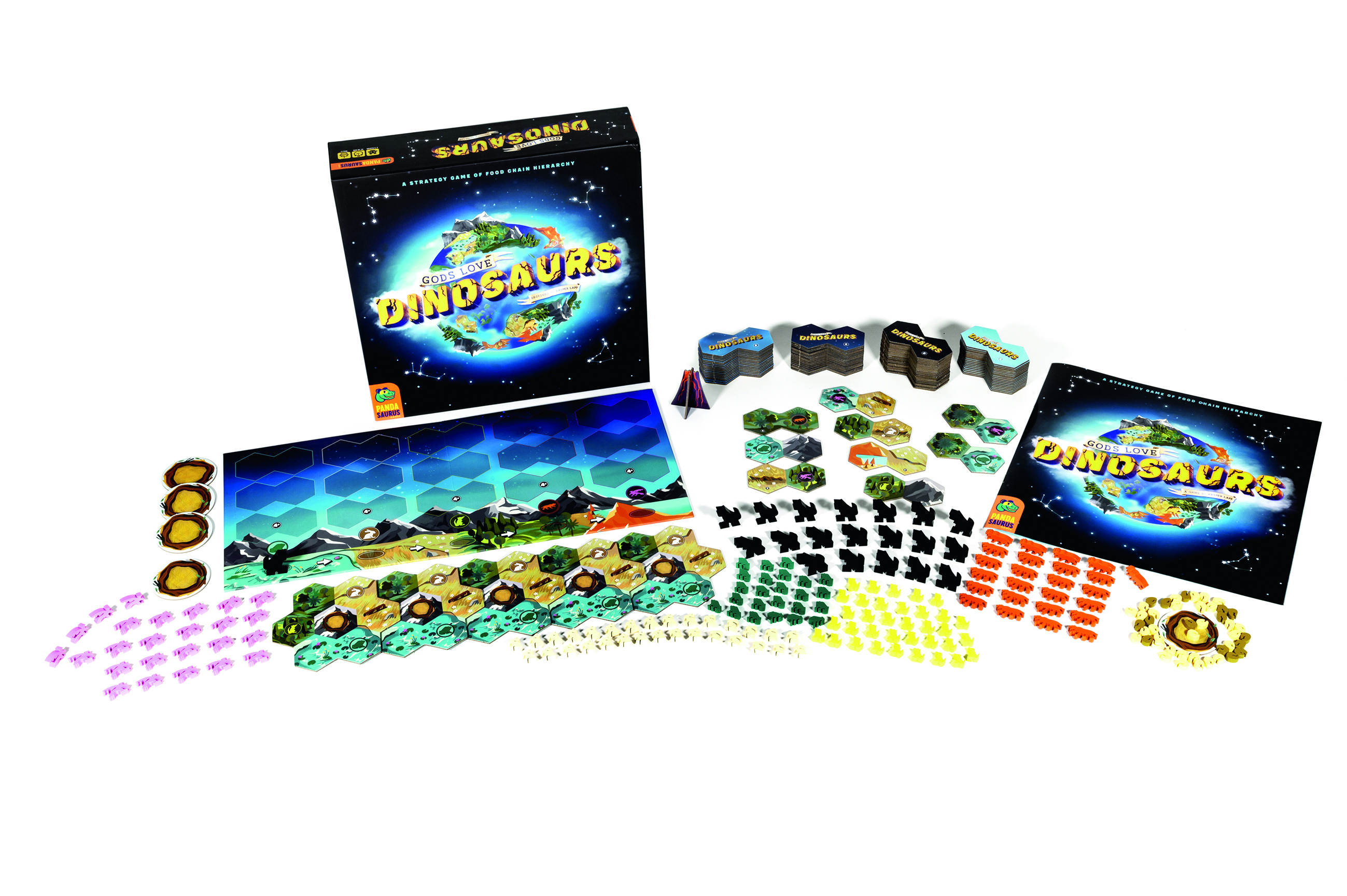