When alien pirates crash-land in New York City and steal psychokinetic energy to transform people into deadly ecto-terrestrials… who you gonna call? Ghostbusters! And Men in Black! In a team-up crossover we didn’t know we needed, with the added cuteness of being in a chibi-from, Men in Black Agents and Ghostbusters are here to save the city. It is a semi-cooperative game, where each player selects one member from each team to fight E.T.s in either a campaign or skirmish mode. All players will need to work together to succeed in the scenario, and similarly, they will lose together if they fail, but each individual team also scores points based on how many E.T.s they defeat or how well they progress through scenario objectives, earning the overachiever an employee of the month badge. 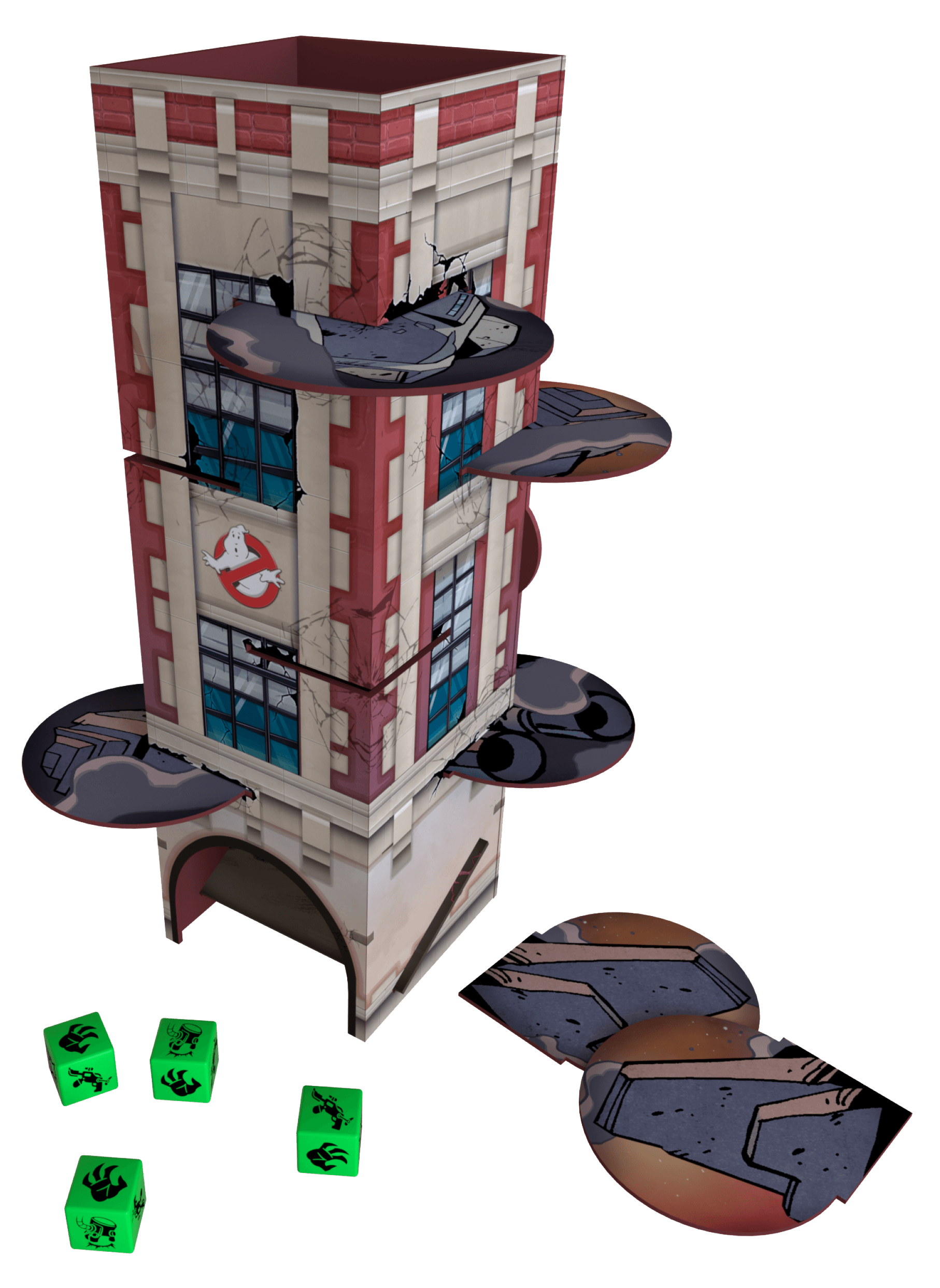 In gameplay terms Ghostbusters x Men in Black is, perhaps, the most reminiscent of Zombicide. Players navigate the gridded modular game board, offering both exterior and interior environments, fight the ever-spawning E.T.s and interact with various tokens on the map to complete objectives. Unlike Zombicide, where you can be overwhelmed by the number of zombies, rather than their individual strengths, E.T.s are not so easily dispatched. Even the non-boss E.T.s can take a couple of hits and will attack players if you get within their range. To attack E.T.s, players will need to spend batteries to charge their weapons and roll dice corresponding to their weapon stats. If they roll a symbol that matches the type of E.T. they are attacking, they deal one damage. For a potentially more fruitful attack, players can forgo all other actions and perform a double-attack, called ‘Crossing the Streams’, or team-up with other players (that is if they agree to help).

E.T.s are constantly spawning and getting in players’ way of completing the objectives. Moreover, players can also sabotage each other’s efforts – they are competing after all – by playing special gadget cards. They, for example, can steal someone else’s batteries, which can be especially frustrating since without them players can’t attack and, in all likelihood, will have to spend their next turn resting. That, as well as having to wait for other players’ turn of four actions, then events phase and then the E.T.s phase, sets a slow, plodding pace for the game. There are opportunities to strategise and discuss that can improve the passing of time, but that only happens if players decide to work together.

Whether working together or not, players will need to be adapting their plans constantly. The events deck – the Hot Sheets – are full of (mostly) bad news and more E.T.s are always spawning from the Ghostbusters’ headquarters. This is the component that is the heart of the game: a dice tower that is made to look like the Ghostbusters Firehouse with horizontal pieces, representing the alien’s ship, slotted into it to hold dice in place. Every time a piece is removed during the game (or the tower is shaken, even if accidently by players bumping the table) some dice are bound to roll out causing more E.T.s to spawn, based on the die faces.

The Firehouse, along with the artwork, character designs, components and even a storybook that is purely in the game to explain the beginning of the story, all do an amazing job of setting up the mood. Unfortunately, Ghostbusters x Men in Black still suffers from the component clumsiness associated with games of this elk: there will be a myriad of small cardboard pieces to fiddle with and the damage markers are still annoyingly stacked next to the enemy figures.

These annoyances, however, do not manage to overwhelm the charm of the game. It is completely adorable, perfectly hitting all the nostalgia notes that will make it a must-buy for the fans of either franchise. Ghostbusters x Men in Black, however, has failed to iterate in any significant way from the Zombicide formula, leaving those looking for exciting and innovative gameplay searching still. 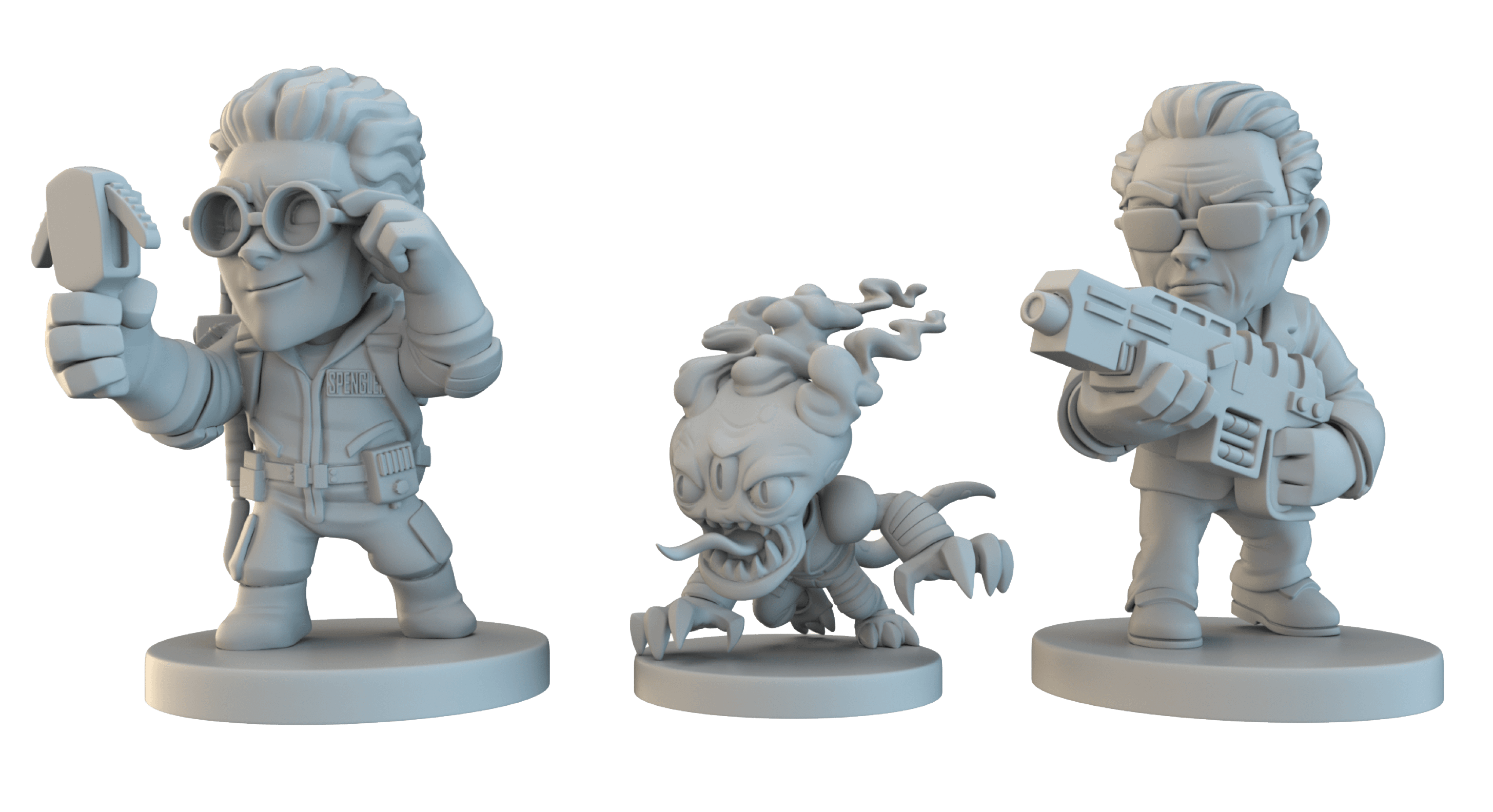 Adorable in its chibi form, Ghostbusters x Men in Black delivers tough gameplay that feels too reminiscent of other similar games.

TRY THIS IF YOU LIKED ZOMBICIDE

Ghostbusters x Men in Black is a bit more Zombicide, wrapped in the humour of the much beloved franchises.