Genesys: Shadow of the Beanstalk

Jacking back into the world of Android

From computer-hacking to bio-modification, Shadow of the Beanstalk has everything you need to launch your Genesys game into the neon-lit streets of the cyberpunk genre – though the smorgasbord of tropes does give the setting itself a distinctly generic feeling, this may not actually be a bad thing.

Like the previous Genesys sourcebook to hit shelves, Realms of Terrinoth, Shadow of the Beanstalk is designed to get players exploring a world first seen in other Fantasy Flight games. In this case it’s the corporate-dominated near-future that’s home to both the Android board game and the recently-defunct Android: Netrunner living card game.

This is a world that neatly ticks every cyberpunk cliché going. Corporate giants grow clones for menial jobs, street toughs with luminous hair jack into vast oceans of data and the streets are awash with designer drugs with achingly sci-fi names like Pixel or Sting. At the very centre of it all stands the titular Beanstalk, a vast space elevator that forms the heart of the sprawling mega-city of New Angeles.

This isn’t just reflected in the fiction, either, with a wealth of new rules and options all designed to help you play out your neon and chrome fantasies.

There are new templates for playing as mechanical bioroids or long-limbed humans born and raised in micro-gravity, skills dedicated to knowing what’s hot on the Net, and careers for hackers and tech experts. If you want to, you could build a cyborg cop armed with a futuristic hand-cannon and a drinking problem, or a genetically- modified courier with chameleonic skin and an ear for online gossip.

Beyond all the new options and slick tech on offer, there are a couple solid changes to the core Genesys rules. The first of these is a codified favour economy – a way of tracking who owes what and how big a deal their obligation might be. While it may seem like a pretty minor deal, it meshes incredibly well with the cyberpunk ethos of information being power.

The other major system laid out within Shadow of the Beanstalk is computer hacking or, to give it its official title, ‘Running the Network’. Breaking into a well-protected system isn’t settled with just a single roll, but rather a lengthy and involved process of battling defences and grabbing data where you can.

In many ways this acts as a kind of secondary combat system for the game and, just as the more hands-on members might buy new guns or combat drugs, a group’s dedicated runner can equip themselves with all kinds of sweet tech to make things easier. 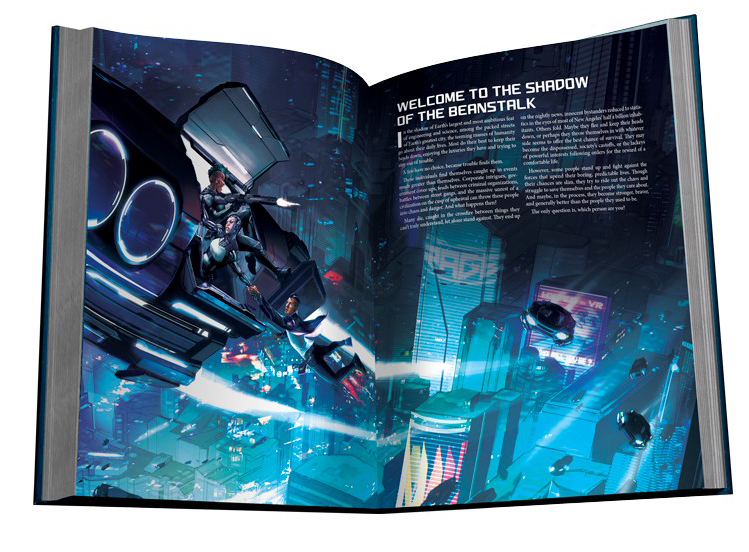 When it runs well the system can be wonderful. Having the runner work alongside the rest of the team, opening doors and disabling cameras as they break into a black-ops lab, can be a thrilling experience that really drives home the cyberpunk dream.

However, while the book has some fairly solid guidance on keeping things fun here’s plenty of scope for it to be handled poorly. Having one or two characters spend most of a session trying to grab vital data while the rest of the table twiddles their thumbs can be unforgivably boring.

Shadow of the Beanstalk is a setting painted in broad strokes and, while it lacks any depth or – if we’re being honest – originality, there’s still plenty of room to build your own stories and characters. In fact, in many ways the generic cyberpunk feel of the book works out in its advantage.

With a slight shift to your perspective you can begin to approach Shadow of the Beanstalk as less of a setting guide and more like a general cyberpunk toolbox that Genesys GMs can plunder as they see fit. Yes, you can use it to run games set in the Android universe, but with only a bit of tweaking you can take a shot at something more directly inspired by Blade Runner or Ghost in the Shell, or even something of your own creation.

If Shadow of the Beanstalk was a little more off-the-wall, a bit more original, all this would become a lot harder. Perhaps that counts as damning by faint praise, but it’s true.

Folks who are already invested in the near-future of Android and Netrunner will certainly get a kick out of the lore and info-dumps, and those that just want sweet cyberpunk rules will find exactly what they want. It’s not the most exciting product of all time, but it works. Sometimes, what else can you want but that?

Like other Genesys settings the world of Android is rather cookie-cutter, but the rules have everything you need for a strong cyberpunk adventure.