Between Twilight Imperium, Sidereal Confluence, Pulsar 2849, Reworld, A Handful of Stars and First Martians, it seems like interplanetary adventure is currently gaming’s hottest trend. And if you’re looking for a complex, meaty, unashamedly brain-taxing take on the genre, Gaia Project stands out from the pack.

A sci-fi sequel to the award-winning Terra Mystica, it hands you control of one of 14 alien factions competing to establish the galaxy’s mightiest civilisation. While that might sound like the premise of every space strategy game ever made, it’s notable not so much for what it brings to the theme, but for what it leaves out. There’s no explosive ship-to-ship combat, no underhand political intrigue, no lucrative trading. Instead, there’s just a sector of open space and a whole lot of planning to do.

Gaia Project challenges you to spread your fledgling empire across the stars, but each species will only be able to thrive on certain types of planets – frozen ice worlds, artificial titanium spheres or lava-strewn volcanic hellscapes. If you’d like to colonise another type of planet, you’ll have to terraform it first, and that takes some hard work. First, you’ll need to advance your navigation technology to the point where you can actually reach your destination. Then you’ll have to devote precious resources to helping it sustain your particular lifeforms. Only then will you be able to claim it as your own and start building structures like mines, trading posts and science labs.

It’s a tough, taxing, ultra-analytical process that forces you to constantly think several moves ahead. You’re endlessly looking for ways to make your economy more efficient, to improve your abilities in different strands of sciences, to optimise your every action and edge yourself ahead of your rivals by whatever razor-thin margin you can manage.

While it keeps direct conflict between players to a minimum, Gaia Project still manages to foster some heated competition. Different factions excel at developing different types of planets, and if you and an opponent both find yourselves going after, say, desert worlds, you’ll soon find yourself locked in a desperate race to colonise every sand-covered spheroid in the sector.

There’s also the bonus you get for building structures on planets close to your rivals’ colonies, which provides an incentive to cram into areas of the board already occupied by your opponents. But it also means you’re far more likely to compete for control of the same planets, suddenly making the vast, open expanse between the stars feel decidedly tight and claustrophobic.

On top of all of this, there’s also huge variability: a modular board that allows for a multitude of setups, a host of different factions that offer their own advantages and strategies, and an assortment of objectives that mean you’ll need to adapt your tactics every time you play. With a 24-page rulebook to slog through, it may be tough to get into, but if you’d like a pronounced cerebral slant to your space empire, Gaia Project is a brain-burning delight.

If you’re looking for dice-chucking starship combat, look elsewhere. But if you get a kick out of managing resources, building economic engines and seeing carefully-laid plans come together, Gaia Project is a complex challenge that’ll bring you back to the table again and again 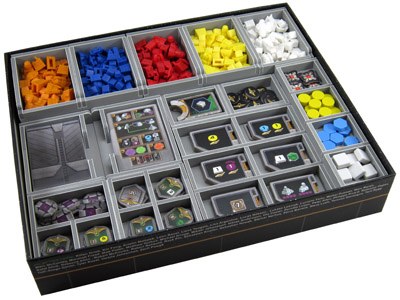