In 2017’s Unfair, players built the best amusement parks the city has ever seen. Their park could have everything an up-and-coming theme-park entrepreneur would ever want - rollercoasters, merry-go-rounds, cinemas, and even pirate-themed restaurants – but there was just one little wrinkle: the competition. They, incidentally, were also trying to build the best amusement park in the city and were not afraid to play a little dirty to earn that title.

The choice of whether to play fair or, dare we say it, unfair was left up to the players. The event cards in the game had two options, one which would be beneficial to all playing, while the other would allow you to sabotage an opponent. Yet, a lot of players did not enjoy the take-that element of the game, even if it was up to them to decide how confrontational to be. Everyone just wanted to build the best and biggest attractions with lots of enhancements and features, while not worrying that their opponent might close half of their park and cripple ticket takings for that round. Well, with Funfair they can do just that.

Funfair is essentially the same game as Unfair but without all the negative effects and take-that mechanisms. Players are still building various attractions in their park by buying and drafting cards. They can even complete secret blueprint objectives by satisfying the indicated requirements. Blueprints, which are very reminiscent of tickets in Ticket to Ride, are the only ‘negative’ element that remained in Funfair as you can lose points if you fail to complete them. The game ends after a certain number of rounds and players will decide whose park is the best by valuing the size of their attractions, the number of staff and completed blueprints, if any.

Playing Funfair, it is immediately clear that it wasn’t the take-that mechanisms that made the original such a success. While the choice of being able to play nice or dirty is certainly interesting (and could probably tell you something about people gathered around your gaming table), taking it away has not made the game any less engaging. The core loop of building the park, making it bigger, earning more money to build it better is still entirely satisfying all on its own. The card play offers many opportunities for interesting combos and bonus actions, engrossing from the first round and holding players’ attention until the very end.

The card variety is the only area where Funfair loses out to its predecessor. Unfair has themed decks with defining characteristics that will alter gameplay, sometimes in quite significant ways. At the start of each game, players choose which decks to use based on the themes and what fun alterations they brought to the gameplay. Funfair still has themes and some fan favourites, like jungle and pirate, make an appearance. However, all cards are used during every play, lessening the variety, but this certainly shortens the set-up time!

Funfair and Unfair are slightly different sides of the same coin. Both games share hugely enjoyable gameplay loops and card play while packing a tonne of personality and humour in their art and flavour text. While Unfair may win out with quantity of content and variety, if you are looking for a family-friendly modular park building game with no negative interactions, Funfair is your guy. 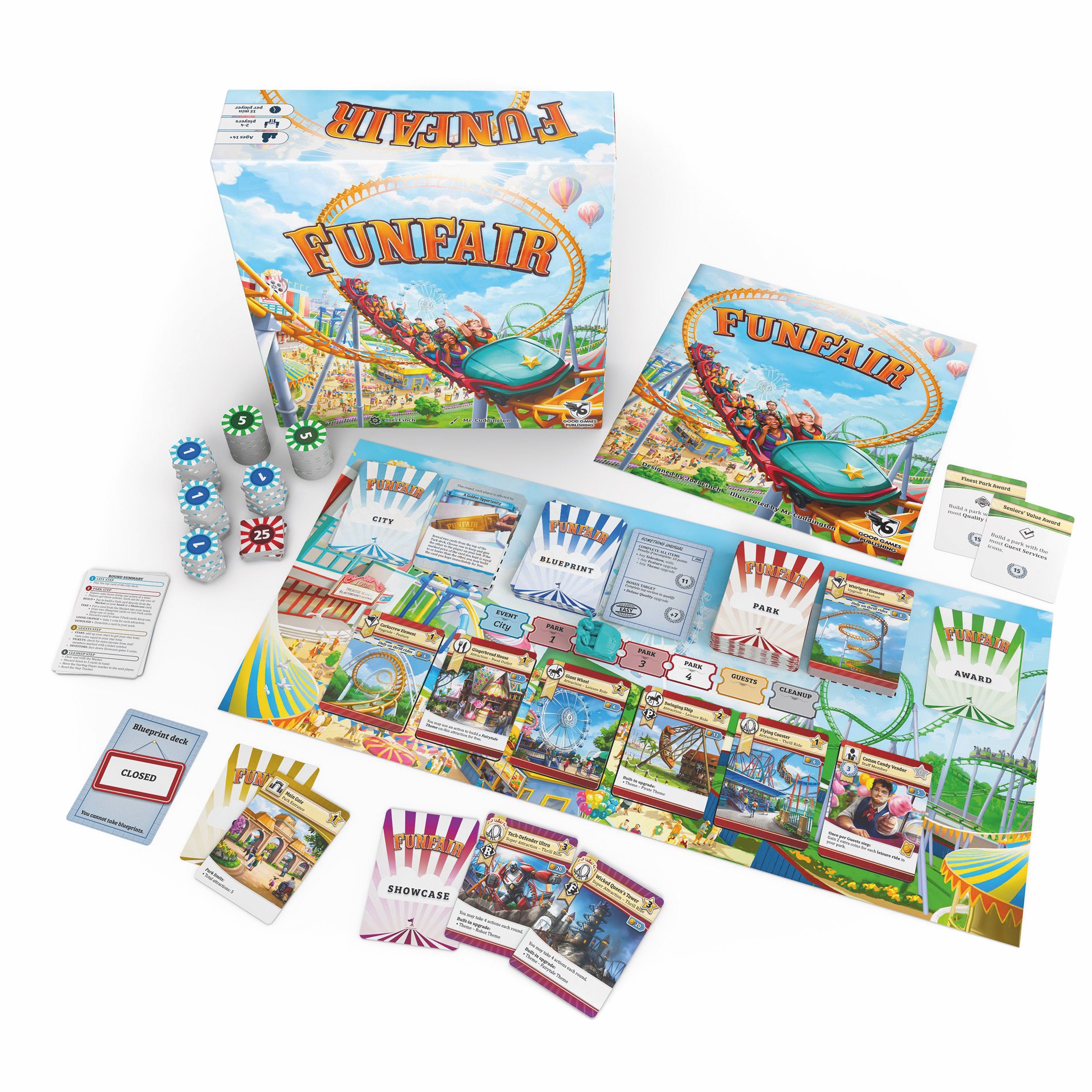 Proof that negative interactions don’t make the game, Funfair takes all of the great elements of its predecessor and raises it to new heights.

TRY THIS IF YOU LIKED UNFAIR

If you loved building theme parks in Unfair but didn’t quite enjoy when opponents sabotaged all your hard work, then Funfair will be the perfect ride for you.

You can read our review of the original Unfair by clicking here!