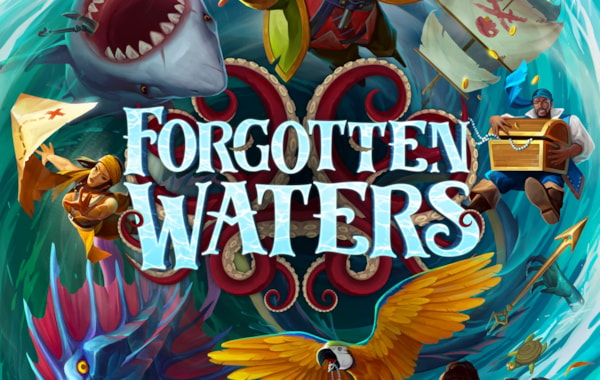 A pirate game to truly get on board with

Many games have tackled the pirate theme in recent years, some better than others. But can a tabletop game truly make you feel like a pirate, thrusting you deep enough into the role so as to develop a hokey dialect and a thirst for oceanic adventure? Plaid Hat Games certainly think so and are looking to their proprietary ‘Crossroads’ formula to prove it.

First seen in Dead of Winter, the ‘Crossroads’ system brought a sense of immersive decision making and semi-cooperative mischief to board gaming. With Forgotten Waters, they have opted for an almost fully cooperative adventure, giving players personal objectives and choices which highlight collaborative storytelling over sneaky sabotage.

Gameplay largely takes place within a gorgeously illustrated spiral bound book. Whether it’s scenes of vibrant coves subtly beckoning players to ponder its mysteries, or looming sea monsters inviting moments of playful panic, these evocative illustrations manage to lure you in to their colourful sense of wonder, creating an irresistible air of anticipation for each coming round.

This level of awe and immersion thankfully never becomes bogged down by mechanics either, as turns are as slick and simple as placing a standee on one of the pages' available actions. The app’s forty second timer encourages players to act quick, relying mostly on the game’s iconography or their own gut instincts when making choices. This real time aspect keeps the story rolling at a good pace and, importantly, never feels restrictive or particularly stress inducing.

But these mechanics are merely props for the game to support its true strength: spinning a mighty good yarn. Forgotten Waters’ involves players in this process through its elegant approach to character development, driven by a basic skill tree found on the front of each players’ unique character sheet. As players level up, small nuggets of backstory can be orated to the rest of the table, with every subsequent reading drawing players ever closer to one of three endings for their character. As simple as this sounds, in practice it is staggeringly effective. Outside of dedicated roleplaying games you are unlikely to find a game so adept at making players care about and embody their characters. A ‘fill in the blank’ section on each of the character sheets (guided by some intriguing prompts) is a further stroke of genius, making even the most reserved of players form an attachment to their pirate’s story.

Yet, as captivating and engaging as these backstories are, they are arguably not the main attraction. At the heart of each scenario is an epic app-driven adventure, featuring some of the best and genuinely funny writing I have encountered in the hobby, alongside a stellar voice cast. Each story plays out with all the bombast of a blockbuster film; full of wit, tension, and quirky postmodern flourishes of parody and homage. Better still is players’ active involvement with these narratives, with gameplay often opening up bite-sized subplots allowing players to expand their characters’ story or merely interact with the smaller details of this magical world.

Ultimately, all of Forgotten Waters’ many parts are designed to summon that roleplaying feel in the most accessible manner, even when applied to the game’s much appreciated web-based remote play alternative. Partially formed character sheets come to life in the hands of players, whilst stories bloom from simple actions and decisions. Skill checks are quick but meaningful, and never succumb to number-crunching or tedium. But, most importantly, everyone rounds off their character’s story knowing they played a part in everyone else’s, and the adventure as a whole. It’s also worth noting that two player and solo mode rules are available online.

A triumphant splash in the world of both storytelling and light roleplaying board games - plunging both genres to exciting new depths in a way that is both accessible and exciting.

TRY THIS IF YOU LIKED TALES OF THE ARABIAN NIGHTS

Forgotten Waters and its surprisingly cohesive storytelling is a perfect companion to this less sleek 1985 classic.