Tom Randell looks to the stars for some forbidden fun…

Forbidden Stars, by James Kniffen, Samuel W. Bailey and Corey Konieczki, is a game of strategic space combat set in the Warhammer 40,000 universe. Battling for control of the long-lost Herakon cluster, two to four players take control of Space Marines, Orks, Chaos Space Marines and Eldar factions in a bid for victory.

Before I go any further with the review I want to make it very clear that I am not a Warhammer 40,000 fan and I will not be looking at the game from a thematic universe, or canon perspective. Instead, I want to take you on a journey through the stars, unmarred by preconception and based entirely on my own experiences in this new and alien galaxy.

One of the first things you notice when you get your hands on Forbidden Stars, is the sheer size of the box. Fantasy Flight Games (FFG) has packed one of its largest boxes with enough components to create a galaxy filled with resourcerich planets, warp storms and the relentless armies and fleets that create the conflict that drives the game.

My first journey into the Herakon cluster took place at the UK Games Expo 2015 where Sebastian, a friendly FFG demonstrator, introduced Forbidden Stars as FFG's latest big box title. Sebastian’s enthusiasm for the game really brought the session to life and the time we spent in the Warhamer 40,000 universe with him was one of my most memorable moments from the show.

After such an enjoyable experience at the show, Forbidden Stars was ordered and I awaited release. As soon as the game arrived I dived straight into the 'Learn to Play' guide and it wasn’t long before I was up and running. The new-style guides that FFG has been putting out lately are a fantastic way to get straight into a game and should help both new and experienced gamers alike. They really are very well written guides, and if you’re not sure about anything in there, then the Rules Reference has an answer for everything.

Before you can start a game of Forbidden Stars you have to build a galaxy in which to play. The box contains a set of pre-punched, high quality tiles that you use to build variable-sized game boards. The number of tiles you use to build your galaxy depends upon the number of players. With two players you use a total of six tiles, whereas with four players you use 12. To build your galaxy, you take it in turns to add a tile to the expanding board and then place objective tokens that your opponents must acquire. You also distribute your initial troops during construction of the galaxy, before, finally, placing one Warp Storm per player on the board.

The Warp Storms add a really dynamic element to the map as they rotate and drift across the board at the end of each round. They act as genuinely inconvenient obstructions, and help form an ever-changing battle-scape.

This initial board creation stage of the game is very reminiscent of the Twilight Imperium (third Edition) setup process and may confuse first-time players. However, as I mentioned earlier, the Forbidden Stars 'Learn to Play' guide is exceptionally good and provides sample setups for two, three or four players if you wanted to dive straight into the action.

The four factions in the box each have their own unique miniatures and cards that you use to field armies, launch fleets and generally storm across the cluster. As you play with each of the factions, you get a great feel for their unique abilities and how to use them to best effect.

The Chaos Space Marines are my favourite faction, so far, because as you advance through the game you can earn the unique ability to pass through the Warp Storms that block movement between sectors. This provides a fantastic strategic advantage because you can launch surprise attacks from fleets that slice through the turmoil of the Storm and rain fiery death down upon your enemies.

A game of Forbidden Stars plays out across eight rounds, each of which comprises three main phases:
- Planning
- Operations
- Refresh
The majority of the game's action takes place during the Planning and Operations phases, with a series of house-keeping steps taking place during the Refresh phase. It’s in those first two phases that you’ll find the heart of the game, the part that brings it to life and draws you in with every step.

Orders are what drive the game and you issue four of them during the Planning phase of each round. You take it in turn to place a single, face-down order token on one of the board sections and you repeat this until you have placed a total of four orders. The game doesn’t restrict the number of orders that can be placed on a tile, however the orders for a specific tile are always stacked to ensure a 'last in - first out' resolution during the Operations phase.

Orders come in four forms: Deploy: lets you deploy new units to the board including planetary troops, buildings and the formidable ships of your fleet.

Strategize: allows you to gather new combat cards and generally improve your powers.

Dominate: here you can exert dominance over the planets you control – gathering assets and using your faction’s special skill if you so desire.

Advance: gives you the chance to advance across the board, spreading your forces as thickly (or thinly) as you like and engaging in combat with anyone who stands in your path.

Once all players complete the Planning phase, you move to the Operations phase.

During the Operations phase, you take it in turn to resolve orders, one at a time. This process alone adds an exciting element of strategy and reminds me of another FFG title - StarCraft the Board Game.

Simply put - if you have an order token stacked on top of an opponent’s order token, they cannot resolve their order until you resolve yours. This provides a great opportunity to mess with their plans because holding off on resolving an order could completely disrupt their entire evil scheme and lead to your ultimate victory.

Blocking your opponent’s orders and forcing them to resolve other orders doesn’t mean that they lose out completely though. On your turn, if you’re unable to successfully, or don’t want to, carry out the order you revealed - you can place the order token on your personal event deck. If you choose to do this, you will be able to use it at the end of the round to draw one event card per token. I’m not going to go into any detail here about the events, but I will say that they have a number of effects that impact the game in some very fun and interesting ways!

The combat system in Forbidden Stars is very simple. Each combat unit provides you with a number of combat dice. You roll your dice to determine your fire-power, defence and morale levels for the combat and you can reinforce your forces with reinforcement tokens before you start the combat card phase.

Combat cards have a standard action, and a secondary action that triggers if certain units are involved in the combat. You use these cards to modify your fire-power, defence and morale values in order to gain the advantage over your opponent.

After each player selects a card, you resolve their effects and calculate your defence points. The total of your defence value cancels out an equal number of your opponent's fire-power points. Any fire-power left over hits the units involved in the combat and if a unit is eradicated, the left-over damage points are assigned to another engaged unit, until all points are used, or all units are dead.

However, if units remain on both sides after casualties are assigned, another round of combat card action begins. This takes place up to three times. If at any point there are only units of one side left, that side wins the combat. Although, if units from both sides remain at the end of the three rounds, each player totals and compares their morale values and the player with the lowest morale must retreat in shame.

Despite the simplicity of the combat it still feels exciting, you’re never sure what you’ll face. Mixed with the ability to improve and gain new combat cards over the course of the game, you can never be totally sure what your opponent has up their sleeve.

Now that you know how the core game mechanics work, I suppose I’d better explain how you win. There are two ways that a game of Forbidden Stars can end. One, a single player captures a number of their objectives, equal to the number of players or the round tracker reaches the end of the eighth round and the player with most objective tokens wins.

Truth be told, in all of our ventures into the Herakon cluster we’ve yet to see the round tracker reach the end of the eighth round. Someone has always captured their objectives, and usually in a most glorious fashion. This game really is one of those titles that will provide you with a fun story or fond memory at the end of virtually every play, which in my eyes is the greatest win of them all!

It’s probably quite clear that I really enjoy Forbidden Stars. It scratches an itch for a “fast-paced space-opera” game that I’ve had for quite some time. Twilight Imperium is one of my all-time favourite games, but it takes so long to play and I can very rarely get people to dedicate the time to play it with me.

Forbidden Stars however, doesn’t suffer from this problem at all. Sure, it takes two to three hours to play, but that time flies and with the smooth playing experience - you never feel as though you’re getting bogged down with tech trees or superfluous mechanics. There’s also some genuine strategic choices to be made, and you’ll find yourself agonising over your options and cursing your opponents as they inevitably block your orders. However, as interesting as these things are, none of them are as satisfying as the moment you turn what felt like certain defeat into the most glorious of victories!

CONCLUSION
Forbidden Stars shines out among all of the titles released so far this year and, despite a thematic universe that holds little appeal for me, the gameplay provides a depth and refinement that both entertains and challenges. If you enjoy a good strategy game with plenty of replay value then look no further. 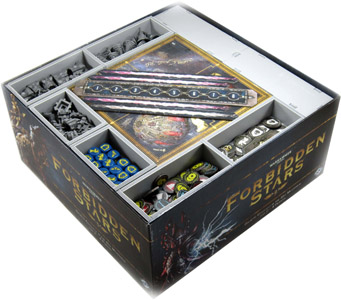