We take a look at Five Tribes from Days of Wonder.

Days of Wonder has a reputation for creating wonderfully accessible games such as Ticket to Ride or Small World, so last year it decided to take things up a notch with Five Tribes – a game that’s simple to learn, like so many of Days of Wonders’ games, but is a devil to master.

Players take control of one of the five tribes as they try to take over the Sultanate of Naqala by gaining power and influence over their rivals. But first things first, Five Tribes is a game that screams quality when you open the box (again something we’ve come to expect from Days of Wonder) thanks to 30 nicely illustrated board game tiles that are used to create the modular board and wooden tokens that represent everything from people to camels and palm trees.

Each turn the players bid to see who will go first, although you don’t want to bid too much because cash is king but if you bid nothing you’ll always go last. On your go you take all the meeples from a square and then move them, one at a time, to new squares. On the last square you place your last meeple and then remove any other meeples of that colour from the square. Sometimes the tile you land on will also require you to place a palm tree, a palace, which increases the value of that particular square, or (if you’ve removed all the meeples from the square) you get to pop down a camel, which gives you the points for that square at the end of the game.

Another thing that adds to the game is that the meeples have different abilities that depend upon their colour, e.g. an assassin is red while builders are blue. So, as well as following the instruction on the tile, you may also need to execute your character’s ability too. You can even summon powerful magical entities known as Djinns, which can be a definite game changer. 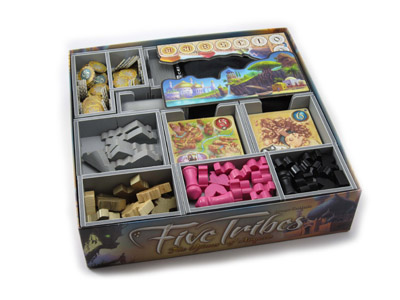 Compatible with Five Tribes®, and The Artisans of Naqala®, The Thieves of Naqala®, Whims of the Sultan® and other Djinn expansions.