If you go down in the woods today, you’re in for a great game

If you're looking for the remedy to a cold, rainy day, Everdell, a worker-placement game set in a medieval fantasy world of forest animals, somehow manages to replicate the feeling of being tucked under a thick comfy blanket with a nice hot drink.

It is an incredibly feel-good game about preparing for winter and building up your town, nestled in the roots of the Ever Tree. Players send their workers – hedgehogs, bunnies, squirrels and turtles – around the board to collect resources. These will be used to build up each player’s town by adding construction and critter cards to their own play space.

Every construction has its own occupant; for example, the store has a shopkeeper bunny. Once it's been built, their respective occupant becomes free to play in future turns. There are also other light engine-building elements, as some cards have effects that trigger seasonally, while others produce a resource when constructions or critters are played. So, while at the beginning of the game the actions are seemingly restricted, midway through and especially towards the end of the game opportunities become bountiful.

The game’s board has permanent spots to visit, but also change each game with a random draw of forest cards (more spots for resources or card gathering) and special events (benefits and victory points). A simple, yet quite effective way to add replayability.

Everdell also comes with a fantastic solo variant that sees you compete against the troublesome Rugwort, a devious rat out to ruin your harvest. It can be played at three difficulties or one long game over the three-year cycle. The gameplay is familiar to the multiplayer variant, except Rugwort will block options across the board and score points for every card you play, so strategy is key. To add even more strategic thinking to the pot, that Rat’scallion scores points for every special event you miss each year so collecting these becomes vital.

A visually stunning part of Everdell is the cardboard Ever Tree that looms impressively over the game board. Thematically it does a lot of legwork – it's easy to imagine little forest animals scurrying around its roots to collect twigs and pebbles. But as for the gameplay itself, it has absolutely no effect. Items placed on its branches could be simply laid down next to the board and although it has a neat place for storing the main deck it is actually quite fiddly to have it there. The bigger issue, however, is that in a four-player game it potentially blocks one of the players from seeing the board. While pretty and thematic, the Ever Tree is also very impractical.

The other components, however, are impeccable. The gorgeous artwork could have been taken straight out of Brian Jacques’ Redwall novels. Resource tokens are not only shaped after what they meant to be – berries, pebbles, twigs and resin – but are also made out of materials that aim to replicate the feeling of holding that particular item. Pebbles are smooth and shiny, as if polished by the river (and indeed, that's where they can be found on the board!), while the berries are rubber and very slightly squishy. Everdell’s components are some of the highest quality I have ever seen, and those tactile elements are an addition to an already standout presentation.

Absolutely magical and a visual feast, Everdell is not the most original worker-placement game, but it is definitely one of the most enjoyable. It may have cute animals, but it is strategically deep enough to satisfy seasoned board game lovers.

Beautiful from crown to roots, Everdell magically manages to raise spirits through feel-good gameplay that is completely non-confrontational but also enticingly challenging. 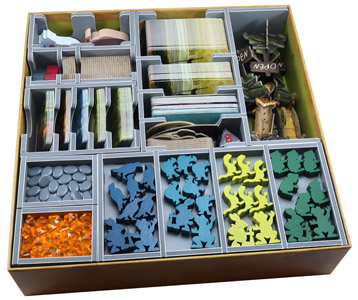 Compatible with Everdell® including all Collector’s Edition content and the Pearlbrook®, Bellfaire® and Spirecrest® expansions.