He had chiseled through the hard concrete floor of his cell, abseiled down the 60-foot drop with little more than a fraying rope around his waist to trust and squeezed through slicing threads of severed barbed wire. He was breathless but almost there, the disguise, compass, food and forged papers he needed to survive on the outside stuffed in his pockets. The security officer rolled double sixes. A single gunshot rang out and the man fell down, dead.

The original Escape from Colditz was released in 1973, 31 years after its co-creator and source of inspiration, Major Pat Reid, absconded from the notoriously high-security prisoner-of-war camp during World War II. The board game was fairly innovative, featuring co-operative and asymmetrical gameplay – a rarity at the time.

Now, Osprey Games has published a new edition of the title to coincide with the 75th anniversary of the real-life breakout next year.

As with the 1973 version, Osprey’s restored Escape from Colditz does a fantastic job of highlighting the history and realism of the game, as well as its Second World War theme. The inside of the box features a paragraph detailing the hardships of the prisoners kept at Colditz and the work of the Red Cross to help keep them alive through food parcel deliveries. Tying in with this is a replica British Red Cross box in which the wooden game pieces (in eight different colours to represent the various nationalities of captured POWs) are stored, which slots neatly into the packaging. Decks of lovingly-illustrated cards for the escaping Allies and German security officer (the first edition of the game featured Nazi swastikas, which were later replaced by an Imperial eagle) attempting to stop them are packed in similarly quality cardboard sleeves. Included for extra atmospheric flavour are replicas of objects from the prison, such as a German newspaper front page announcing the escape, and a 32-page history booklet. There’s even a secret hand-drawn map hidden in the box – if you can find it.

All in all, it’s an extremely high quality package, topped off by an oversized game board with the game’s logo embossed in foil on its reverse. The board is notably improved from its forebear, adding a handy round timer around its edge to encourage a faster pace of play and a greater level of detail to the bird’s eye view of Colditz and its surrounding countryside, to which the Allied players are attempting to flee.

Turns play out in relatively straightforward fashion, with players – Allies first, then the solo security officer – rolling two dice to calculate movement points available for prisoners and guards, respectively. Doubles means another roll, while scoring under five grants the ability to pick up an ‘Opportunity’ card, which can be stored and used later for everything from escaping solitary confinement and attempting to drive out of the front gates in the staff car for the Allies to employing deadly force via the 'Shoot to Kill' command for the Germans.

Movement points can be divided between as many or as few pieces as desired. Allies initially attempt to make their way from the starting area to the various rooms of Colditz’ internal courtyard in order to gather resources, from rope and forged documents to wire cutters and an escape kit – which must be held to successfully flee. As soon as a player gains an equipment card, their pieces can be arrested by guards that land on the same space (although they initially cannot enter certain rooms), sending them to solitary confinement until, Monopoly-style, they roll a double or get a card allowing them out. 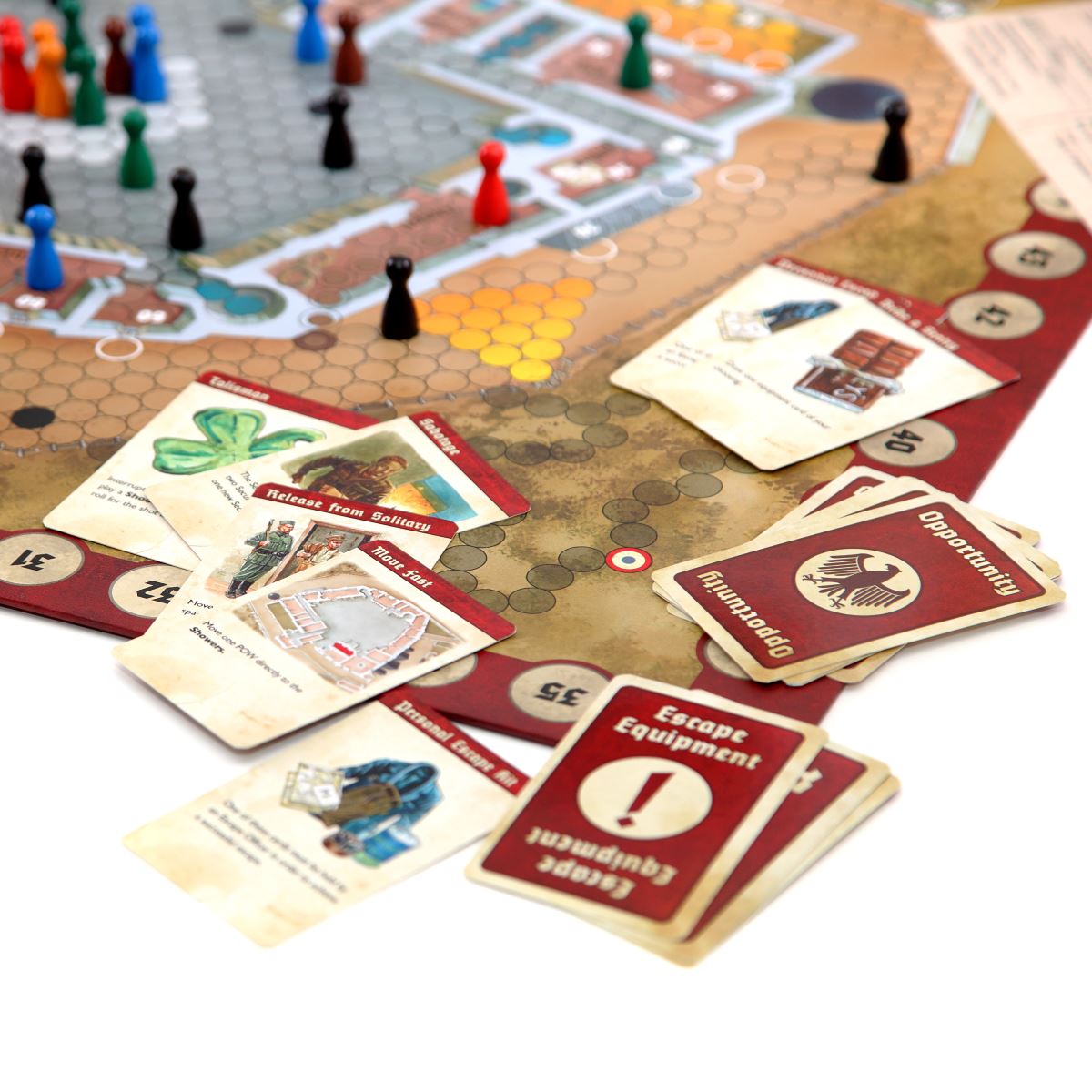 Once enough items have been gathered, players can choose to stage an escape, unlocking doors, climbing down ropes, tunneling under walls and more in an attempt to make it to the targets at the far edges of the map that count as a successful getaway – with two escaped POWs winning the game.

Using an item means placing an escape marker on the obstacle. The markers are little cardboard exclamation marks, contrasting with the otherwise premium wooden pieces and cards. Allies and guards alike can then pass freely through the obstruction, with guards able to optionally destroy the item as they traverse it, stopping further pieces from moving through. Other mechanics include safe spots for prisoners, saving them from being arrested, and spotlights that illuminate spaces that prisoners cannot stop on. The rules change as inmates make their way from the depths of the castle to the outer countryside, with players whose pieces are arrested outside the inner courtyard having to discard precious equipment.

This edition of Escape from Colditz actually features different rules to those originally devised by Reid and co-creator Brian Degas, doing away with the randomised ‘Do or Die’ cards which could be turned over with unknown consequences in a last-ditch attempt to escape in a single turn or literally die trying. The cards are included as part of the set, with the original instructions printed in the back of the rulebook, if you’re curious to experience the changes for yourself or are adamant to play the game as it was first created, but the tweaks and refinements to the new rules help modernise mechanics that are markedly of their time.

Speaking of which, some flaws remain; dice rolls dictate much of the game’s flow, leading to potentially frustrating situations where players can end up with all of their pieces stuck perpetually in solitary. The Opportunity cards can unbalance the difficulty in the favour of low-rolling players, with prisoners who uncover a tunnel nigh uncatchable until the security officer draws the counteractive 'Tunnel Detected' card. Though the game supports just two players, its real strength is in co-operation between the POWs – which also helps to even the odds against the fittingly tough-to-beat prison guards.

While it might show its age in terms of gameplay, this new edition of Escape from Colditz is a gorgeous set for tabletop and history fans alike. Clearly, a lot of care and attention has been paid to respecting the original game and its real-life muse, while also making smart changes to help find a new audience today. All of the components are finished to an impressive level of standard, complemented by beautiful new artwork and the fascinating historical artefacts and details. It’s the type of set you could see continuing to be passed down through generations another 75 years from now.

Escape from Colditz remains a fun and fascinating – if unforgiving – way to understand and appreciate an important real-life event. The mechanics may be a tad dated, but this set is a loving tribute to an iconic British board game, which is sure to help it stand the test of time.