A treat for fans of wharf-gaming

Embarcadero is set in 1850s San Fransisco, at the height of the Gold Rush. So many people have come to the city in search of their fortunes that dozens of ships lie abandoned in the bay. You play canny entrepreneurs claiming these ships, towing them into the harbour and using them as prime real estate, building banks, hotels, saloons and offices. Whoever builds the biggest, choicest chunks of wharfside real estate while increasing their political influence in the city council wins.

Right from the off, Embarcadero is one of those games that pops theme-wise. Not every game need have a strong theme that integrates well with the mechanics, but here, the empty wharfs that soon grow busy with ships and houses as the game progresses really immerse you in a place and era that, until you started playing, you probably didn’t know much about.

The component quality is excellent, with little ridged cardboard ship tiles that the square plastic buildings slot nicely on top of. As the game goes on, you get the feeling of building a city together, adding second storeys, even extending the wharfs out into the ocean. You’re making permanent choices, which in turn shift the decision space you’re each working with. This means the game offers both strategy and tactics, as you mix planning to capitalise on your character’s special abilities with responding to the changing board state.

One small but very real quibble – though it looks pretty, the buildings aren’t quite as stable as they might have been, especially when you’ve got half a dozen or more all bunched together in one area. Unless you and your friends have the fine motor control of senior neurosurgeons, you will knock them over at least once per game. It’s worth keeping an eye on where your buildings are so you don’t lose track when the inevitable collapse happens.

There’s a sizeable deck of different ships and buildings, with different sizes, costs, victory point rewards and bonuses, creating plenty of variability. You buy and store cards, which become your hand in the next round, meaning you can plan for what’s to come, but as space disappears there’s always a gamble between blocking your opponents and expanding your own real estate to make room for the high scoring buildings you want to construct.

Like many classic mid-to-heavyweight Euros, the rivalry is mostly indirect – you get in each other’s way a bit, but you’re rarely locked out of choices until the very end of the game, where space becomes scarce. The economic and resource-management side of the game is lighter than it first looks, leaving the focus on placement and connecting lucrative strips of buildings around wharfs. Varying goals each game help to mix things up.

Fundamentally, this is one of those thinky, chin-scratchy Euros for those of us who enjoy squinting at a board and going ‘hmm’. There’s that nice, familiar tension where you can’t do everything you want, and ultimately the player who manages to squeeze a few extra droplets of value out of their engine is probably going to win.
Building up against your opponents’ structures, for example, nudges you up the council track, granting bonuses as you pass certain spaces. Climb high enough, and valuable landmarks get revealed and added to the building market. But wouldn’t you prefer space to expand? Every choice has upsides and drawbacks.

The plastic buildings give it a pleasurable tactility – whom amongst us doesn’t enjoy playing with blocks given the excuse? – but they also make you feel like, for all the jostling for supremacy, you’re making something together. Slightly wobbly construction aside – and let’s face it, that’s probably historically accurate – Embarcadero is a fun puzzle sitting on sturdy foundations. 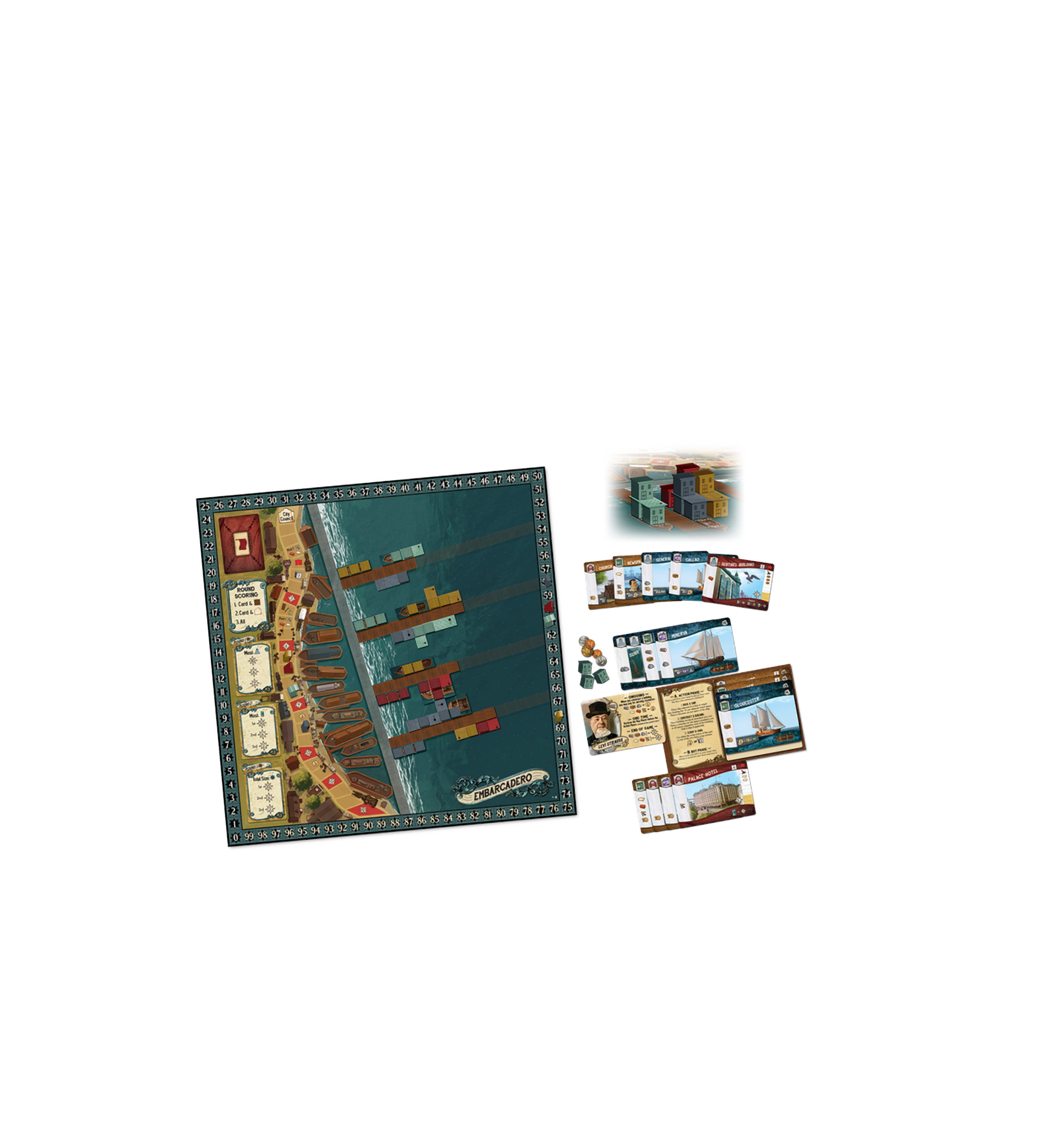 TRY THIS IF YOU LIKED Chinatown

It’s less directly interactive than fellow historical US real estate game Chinatown, but ticks many of the same thematic boxes.