A brave and busy new world

French publisher Blam! Have been responsible for some of the prettiest and most imaginative titles in recent years. From the air-bound antics of Celestia and Noria, and the transcendent Chakra and Imagician, to the more earthly inspired Montmartre and Nemeton. Continuing this imaginative streak is this year’s Dunaia: an innovative dice-drafter from designer Thomas Dupont.

Dupont’s fantastical world sees players leading their mysterious tribes through a period of monumental growth, enlisting the help of ancient steel golems called Dunaia to forge a new, peaceful civilization. This will be achieved through the construction of buildings, reassembling powerful artefacts, and ultimately fulfilling a number of prophecies.

As immersive as that may all sound, mechanically Dunaia is a relatively abstract game. Through dice-drafting, players will be activating the numbered Dunaia on their grid-based personal boards, and gaining the benefits of the spaces or buildings positioned adjacent to them. Following activation, the die can then be used to carry out one of a number of actions such as buying buildings or moving Dunaia, chosen in a worker-placement fashion.

Whilst not the most complex game, success in Dunaia – and to an extent, enjoyment – does require utmost efficiency in regard to how the dice are used and which tiles are placed and where. Activating these towering steel golems typically rewards players with the game’s currency of metal flowers, memory chips which can be traded in for artefact segments and bonus actions, and progress toward buildings currently under construction. Whilst the former certainly need to be managed, the difference between winning and losing is largely dependent on the clever placement of Dunaia’s three types of building.

Level one buildings offer additional spaces for the worker-placement section of each turn, with the option to also use opponents’ buildings offering a brief but welcome taste of player interaction. Level two buildings will trigger various rewards when activated if bordered by specific colours, whilst level three buildings function similarly albeit granting end-game points instead.

Once you get a handle on the best placement of your tiles – a feat requiring an element of luck due to the random nature of how tiles become available – attention can be turned to getting them constructed quick through the positioning of your Dunaia; an engaging puzzle thanks largely to Dunaia’s neat twist on traditional dice-drafting. In addition to the five white (incorrectly referred to as black in the rules) dice, one die of each of the players’ colours will form the drafting pool. Once rolled, all white dice must be taken first, thus making each player aware of exactly which die they will be resolving last. This ingenious bit of design gives a greater sense of purpose to all the actions resolved prior to the final die, as players erect buildings and meticulously manoeuvre the appropriate Dunaia to its optimum position. Consequently, there’s an addictive sense of escalation in knowing that most actions are being spent on maximising your final action before the dice are rerolled.

Whilst, the combination of mechanics Dunaia offers certainly work, I can’t help but imagine it functioning more smoothly in the context of a more explicitly abstract game. The aesthetic style and occasionally fiddly components give Dunaia a busy-ness which detracts from any sense of immersion, and contributes to an overall lack of clarity clouding the experience. Add to that a less than perfect rulebook and some minor printing errors, it’s safe to say Dunaia is not without its problems. But then again, they’re not game breaking and there’s some genuine enjoyment to be had from Dunaia’s crunchy take on dice-drafting. 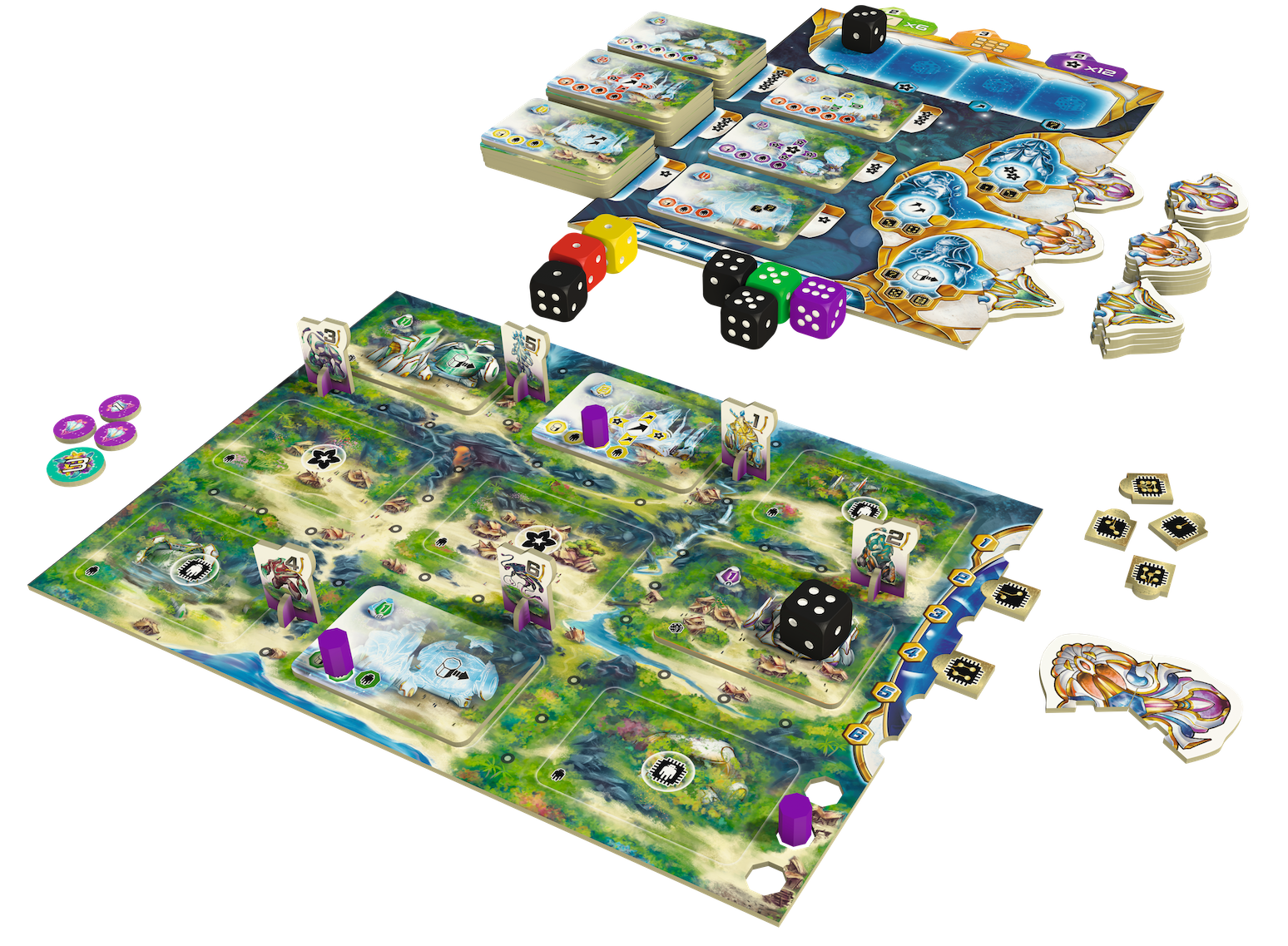 A fun but occasionally convoluted game that suffers from a busy aesthetic and a lack of clarity.

If you’re a fan of dice-drafting, both of these titles have something fresh to offer.